Extinct in 20 Years: How Radical Cooperation could Save the Elephants, the Planet & Us. 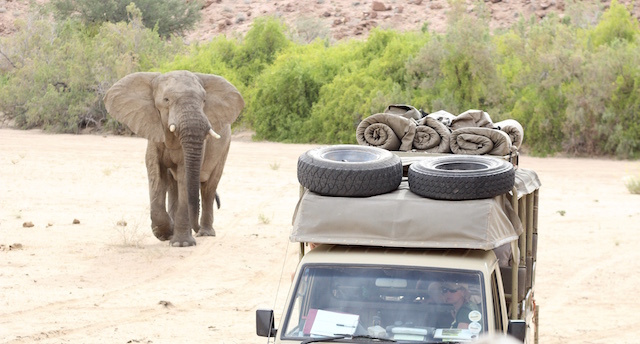 Almost a day after first finding their tracks, we finally come across Medusa and her herd grazing on the lush green vegetation of the dry Ugab river bank.

She has been the matriarch since the death of Mama Africa almost two years before.

I am struck by how relaxed the elephants are. A young bull a few meters away carries on pulling leaves off a camel thorn tree as if we weren’t there. Some females with their young in tow saunter close past our Land Cruiser to partake of some newly-discovered delicacy on the opposite river bank.

We stay with them for a while, following at a respectful distance as they slowly make their way further down the snaking river’s edge before we head off into the hills to find a campsite for the night.

This is Damaraland in the Kunene region of Namibia, one of only two places in the world where desert elephants still roam.

Being a permaculture teacher and consultant, I was asked by EHRA (Elephant Human Relations Aid) to help design and create a vegetable garden in the desert to feed their team of international volunteers—the backbone of this project. Permaculture is a design science based on the observation of natural patterns and setting up systems where we get to produce what we need with the aid of these natural patterns. Growing good vegetables in the desert was going to be challenging, but not insurmountable.

To understand why the EHRA came to be, we have to go back in time a little. The story of the desert elephants of Namibia is a unique one, as it can be seen as a story of recolonization… by the elephants.

In the early 1900’s, desert elephants used to roam here, but as subsistence farmers populated the area elephant numbers started to decline—until there were none left.

That was until 1996, when a lone bull called Voortrekker walked down the Ugab river back into the desert.

There are many theories on why he returned. Some say it’s because food became scarce up North. Others believe that he was following an ancient genetic instinct. Whatever the reason, a year later Voortrekker returned with a whole herd in tow. The subsistence farmers in Damaraland, quite rightly, were not all too happy about the returning elephants, as they are powerful animals capable of doing much damage.

Apart from that, there was a precious resource that both humans and elephants needed.

Farmers would arrive at their wells to find their wind pumps pushed over and their dams destroyed. The relationship was not off to a good start.

This is when EHRA came to be. This relationship between elephants and people was only going to work if a biosphere was created where both parties were equally valued.

Tension was building, and incidences of conflict were on the rise. Elephants are extremely intelligent creatures, and also posses incredible memories; they do not easily forget acts of violence and aggression against them, and it can take a long time for these relationships to be mended.

A week before my first encounter with the elephants, I arrive at the EHRA camp in a minibus with eight other volunteers.

Over dinner, we are briefed on what we will be doing over the next two weeks. The first week will consist of heavy labor to construct stone walls around the farmers’ dams and water pumps to protect the infrastructure from potential damage. In exchange, the elephants get to drink from the water sources.

The second week we go on Elephant Patrol. First tracking down the elephants, then checking, monitoring and taking dung samples.

Both weeks will be spent out in the field sleeping under stars and cooking on fires. Bliss to my ears!

Three days into the first week, while taking a water break in the 40-degree sun, I find myself watching the other volunteers busily mixing cement, carrying rocks and digging trenches. Not only have these volunteers decided to come work on the EHRA project, but they are also paying for the privilege to do so.

The project operates entirely on volunteer support—financially, and in physical hard labor. For quite a few of the volunteers, these two weeks might be the bulk of their holiday allowance, and they have chosen to come and spend it here slaving in the hot sun. 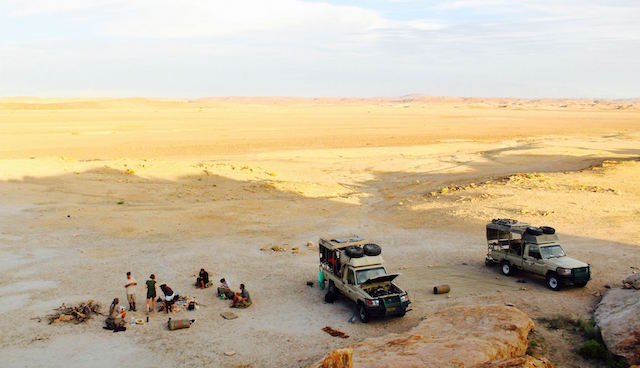 In the permaculture world, we speak of three ethics that are the foundations for any good permaculture design.

I would like to believe that every volunteer here understands, on a fundamental level, that tourism might not just be about relaxing in exchange for hard earned cash, and that some kind of give away is required, too.

Captain Paul Watson from Sea Shepherd says that we have lost 90 percent of our elephant population in the last 40 years. From an estimated population of about 25 million 500 years ago, it was reduced to about 10 million by 1910. By the 1970s there were estimated to be about 1.3 million elephants left.

This is mainly due to trophy hunting, poaching and war, and also habitat loss. Trophy hunting is a big business in Africa and has turned many a conservancy or reserve into private hunting grounds for the rich. Hunting clubs award their members for completing a “Grand Slam.” With names like “African 39” or “The African Big Five Club,” one starts to see the picture.

War and poaching has had an extremely detrimental effect not only on elephant numbers, but also on the social composition of the herds. These huge mammals are not so dissimilar to humans when it comes to being educated and guided by elders. Poachers tend to target older elephants since they have bigger tusks, which means an elephant herd can gradually, or quite abruptly, lose all its elders. It’s the elders who keep the younger ones in check, show them the ancient trackways and teach them how to be “elephant beings.” When they suddenly disappear, we’re left with a herd of angry juveniles who don’t know how to behave. Sound familiar?

And when one is dealing with a trade where the price of ivory is determined by its scarcity, one starts to realize that the ivory trade business is not interested in elephant preservation.

An object only becomes priceless when it is no longer obtainable.

Subsistence farmers sometimes refer to elephants as the “government’s cattle.”

How many times in the past would neo-liberalist conservation policies dictate that all human settlements be removed from vast tracks of land to make space for a “Nature Reserve?” A place devoid of human settlements to be viewed as “unspoilt nature” and appreciated by those who can pay the entrance fee at the big iron gates and afford the plush accommodation in the luxury safari camps.

Little, if any, tourist revenue ever filters down to these displaced people, so one cannot blame them for feeling marginalized. The creation of conservancies in which local people get to own, run and share profits has aimed to correct this imbalance, but is still far from perfect. 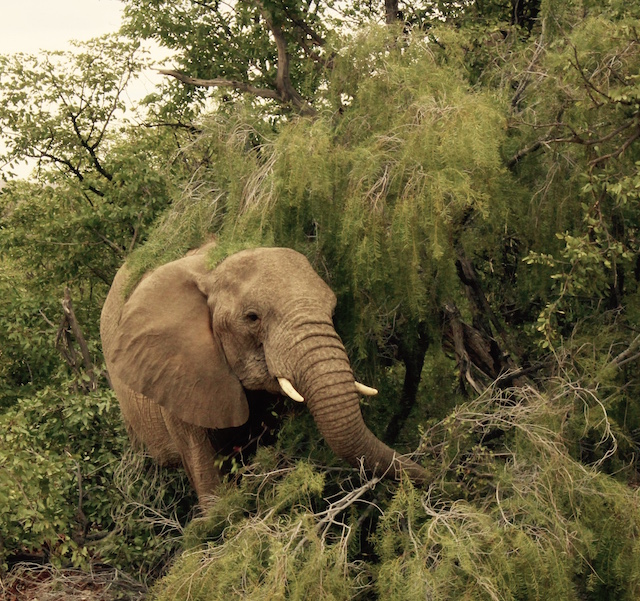 Back in basecamp after our last day out on patrol, I find myself sitting around the campfire with the other volunteers recalling experiences of the last two weeks.

It’s been a good day. We found two more herds and counted four new babies. Moving through this spacious wild landscape, sleeping under stars and spending time with these incredible creatures has affected us all, and there is a sense that what we did together the last two weeks has actually made a difference.

Elephants are a keystone species. They are the “bulldozers” of the natural world. They plant forests, and also create savannas by taking trees down, creating healthy ecosystems for many other species to thrive and thus creating a self-regulating system that we are only just beginning to understand.

Elephants need to eat vast amounts every day, because they can only absorb 40 percent of the nutrients, leaving 60 percent behind in their dung for other animals to thrive and live on—and also for me to make compost for the new vegetable garden.

Reflecting on the EHRA project, I feel like they might be on to something. A new ecological conservation approach where local communities are as much valued as the wildlife. An opportunity for “voluntourists” to walk away from their experience with a sense that they’ve experienced true wilderness and made a hands-on contribution to its conservation at the same time.

At the rate we’re losing elephants, in 20 years’ time we will only have pictures, films and bones to show. The name of this journal will be extinct.

EHRA is working with a concept that could radically change our relationship with nature, moving away from separation and toward a feeling of being embedded within it.

This could be a good way to gift our children a world with elephants still roaming upon it.

The Secret Life of Elephants. 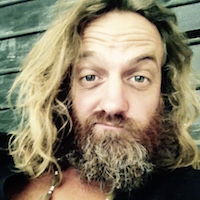