The True Poo on Composting Toilets. 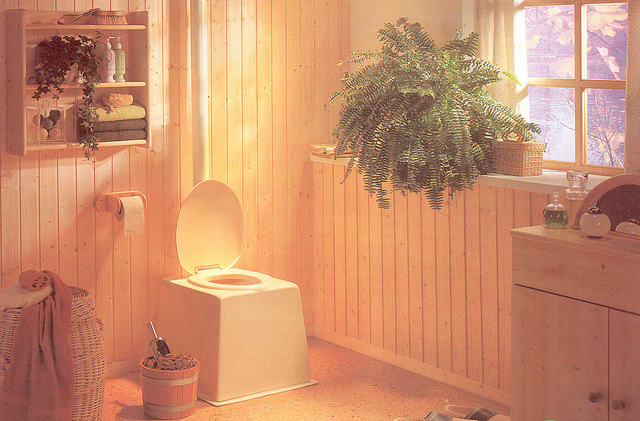 I have to admit, when I first heard about composting toilets, I was a little turned off.

I mean, some things are just meant to stay behind closed doors, and our toilets are one of those things, right?

As time went on, though, and I saw how clean, sustainable, and efficient composting toilets can be, I realized that it doesn’t have to always be a case of “what happens in the toilet stays in the toilet.”

I know. The whole idea creeped me out a little bit, too, but then I realized that human waste has to go somewhere. I would rather put it to good use than to pay to have it hauled away to be filtered and burned.

Let’s face it, just because we pull a magical handle and our toilet waste disappears, that doesn’t mean it travels into the abyss. The process of treating it is costly and energy intensive, not to mention the toll on our planet’s environment when we use millions of gallons of perfectly good drinking water to flush our waste.

Composting toilets are a clean, cheap, and eco-friendly solution to our number two problem in off-the-grid living and energy independence. (Here’s more on why energy independence is important.) They turn waste into humus, a nutrient-rich organic material that can be used to enrich the soil around your trees, flowers, and shrubs.

When we break down the process, there’s nothing mysterious or fancy about it. It’s perfectly natural, and it makes sense.

Composting toilets are no longer just for camping, RVing, and hippie gatherings. They can be found anywhere and everywhere, from off-grid tiny houses to high-end construction. Technology has come a long way, making them more user-friendly, safe, and simple.

Multi-chamber batch systems, sometimes called centralized composting toilets, require less maintenance and oversight. They utilize more than one excrement bin; while one is in use, the other composts. These are handy systems, but they do cost more initially. These are the most common systems found in homes.

These toilets use natural fungus and bacteria, and also sometimes peat moss, sawdust, and other organic matter, to break down your low down from down low into humus in the attached composting bin. It also compacts it to 10 to 30 percent of its original volume.

Most composting toilets don’t use water. However, micro-flush toilets use about 4 cups of water per flush. That’s not much considering older toilets can use up to 7 gallons of water with every flush. Even the most high efficiency standard toilets today use up to 1.28 gallons per flush.

The down side to micro-flush toilets is that they do need a battery or small amount of electricity to power a vacuum. The vacuum moves waste to bins, most often located outside of the house or in the basement.

Batch design toilets without a vacuum flush rely on gravity, so composting bins must be located on the floor below the toilet.

An air inlet and exhaust system have to be in place to assist with decomposition and to release water vapor and other byproducts. My first thought was that this must be a smelly part of the process, but it really isn’t. Neither is the part where the decomposing material has to be turned; some toilets have automated aeration systems that do it for you. They use a small amount of electricity, but that electricity can even come from solar energy.

When it’s all done, the humus can be removed through a door in the bin. There’s really nothing not soil-like about it. It doesn’t smell bad. It isn’t dangerous. It’s been deemed safe for handlers. It’s just good for your plants.

Of course, you should never use it on your vegetable garden or in growing anything you’re going to eat because of the natural bacteria that can be involved. Anything else is fair game, though.

A caveat here, though: There may be local laws and building codes regulating the addition of composting toilets to your home or business and the handling of composted waste, especially if you live in a city. Check those out before you install your system. Also, if your laws are unreasonable or outdated, don’t be afraid to educate your city council or community on the benefits and mitigated risks. This is one time when it’s completely acceptable to be a potty mouth in public.

Specifically, look for a unit that complies with the American National Standards Institute’s standard for composting toilets. Some even offer lifetime warranties, although how you’d return one, I don’t know.

Here are a few more facts:

>> For a year-round home for a family of four, the typical cost of a composting toilet is $1,300 to $6,000. Compared to the cost of water alone throughout the lifetime of a toilet, this is really a pretty nice savings. They are more expensive to operate than low-flow toilets, but they are more affordable than septic systems.

>> You can use a composting toilet anywhere, including places that aren’t connected to a city or private sewage grid, or where building a septic tank is pricey or difficult.

>> Even if you don’t want to use a composting toilet in your main bathroom(s), you can install one in a basement or lesser used space to save money and maintenance and to have access to composting material for your yard.

>> It is more resource—and cost—effective to treat waste onsite, and by using a composting toilet, you eliminate your share of harmful flows into rivers and oceans. Plus, humus is much safer than the residue from either waste-water treatment plants or septic systems.

>> When you use a batch system, composting toilets are the most hygienic choice of all. The natural bacteria that makes compost also kills viruses, bacteria and the nasty toxins in human waste.

>> Some toilets allow you to compost vegetable peels and garden trimmings with the toilet waste. How cool is that?

Composting toilets can be the way to go if you don’t want to flush dollars down the drain. They’re also better for the environment, and are the gift that keeps on giving because they are a lasting source of nutrient-rich humus.

Do your research and take the plunge. It’s the only way to go.