World Humanitarian Summit Cuts to the Core of Global Suffering. 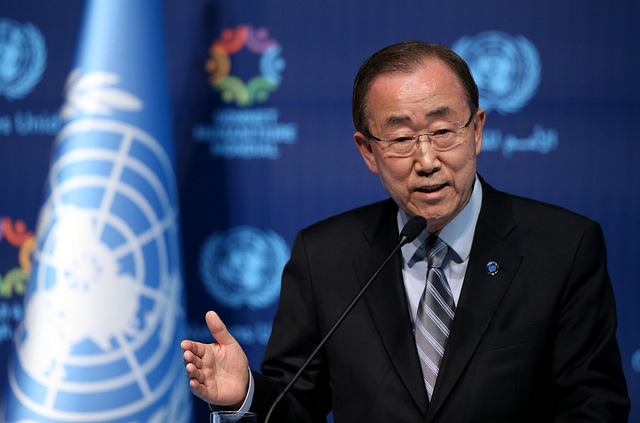 In a nutshell, what the World Humanitarian Summit that convened in Istanbul, Turkey on May 23-24, advocates is this: Investing in people—not in the ravages of war. Their global vision: Opening doors and borders—not closing them.

Is any of this feasible? Or is it just another well-intentioned UN PR exercise to justify its raison d’être? Well let’s hear from the Secretary General, Mr. Ban Ki-Moon, the instigator of the summit:

“We are all here because global humanitarian action is unprecedentedly strained,” Mr. Ban told thousands attending the opening ceremony, which featured captivating performances and inspiring thoughts by renowned stars including Forest Whitaker, Ashley Judd and Malian singer, Inna Modja. The latter’s poetical ballad with flanking visuals, the most heart-rending appeal of all.

It is not breaking news for any of us to know that there are millions worldwide struggling on a daily basis with poverty, displacement, disease, and all the concomitant fallout of war, fundamentalist terrorism, and the effects of global warming and tidal rises. We hear about it everyday, and possibly for many of us it’s no more than a sound byte among millions of others that simply gets lost in a maelstrom of information overload. Or, dare I say it, compassion fatigue?

And that, however platitudinous it may sound, is sad and very disturbing.

“This is a 21st century United Nations gathering,” Ban told the Summit, adding that its Agenda for Humanity, the document he recently issued to steer discussions and action, is based on three years of consultations with 23,000 people in more than 150 countries.

Over its two day summit in the Turkish capital, WHS brought together key investors who have demonstrated a will to improve the global humanitarian system, including more than 65 Heads of State and Government as well as leaders from the public and private sectors.

The UN chief underlined that the world is looking to them for commitments to five core responsibilities:

“We are here to shape a different future,” Mr. Ban concluded. “Today we declare: We are one humanity, with a shared responsibility.”

Turkish President Recep Tayyip Erdogan expressed hope that the Summit would lead to “auspicious outcomes” for millions of people struggling to sustain their lives under great duress. In his words:

“Pain knows no colour, race, language or religion… We will never close our doors or our borders to people . We as leaders and responsible individuals of the international community can only succeed if we work under common principles and goals.”

And from the survivors…

Victor Ochen, a former child solider from northern Uganda, reflected on his inescapable violent childhood. At the age of 13, he’s had enough and formed a peace club in his refugee camp to discourage children and young people from paramilitary enlistment. “Peace comes from within,” he said. “Be human and act human.”

Victoria Arnaiz-Lanting described her harrowing survival of Typhoon Haiyan which hit the Philippines in 2013. She lost many friends and colleagues in the storm, dead bodies littered the streets, and “trees and electric posts fell to the ground like match sticks.” The thousands which the typhoon displaced were driven by hunger and grief to loot whatever they could from supermarkets.

And yet, she expressed how incredible it was to see how quickly people rallied to rebuild their lives. According to her testimony, the Philippines Red Cross and victims themselves began treating the wounded and liaising with the Government and other humanitarian actors.

“This is humanity in action,” she told the Summit, noting that disasters affected more than 200 million people a year and that preparedness must become a way of life. She encouraged every nation, regardless of size, to invest in local activism.

What prompted Mr. Ban Ki-Moon four years ago to plan this 2016 Summit was, “concern for rising humanitarian needs and declining political will.”

Isn’t it time we pause our video gaming, political posturing, and online gambling to take a serious look at what this important summit has to say to humanity as a whole? And, more importantly, to consider what possible ways we may, on a local and digital level, contribute to the healing, reconciliation, and flourishing of our one human community?

The physical planet, no matter how much we contaminate and pollute it, knows how to cleanse and renew itself. And it will expedite this process accordingly. Yes, we need to be a vital part of this cleansing, but we must first start to pay closer attention to how we—one species among millions—are failing to feed, clothe, heal, educate, and provide shelter for the neediest in our midst.

Earlier this year 2,000 of the world’s most powerful people met in Davos, Switzerland to discuss innovative ways to put cutting-edge economics and computer technology at the service of the common good. Long term service to humanity, rather than short-term gain for billionaire entrepreneurs, was their clarion call. And immensely commendable at that.

So yes, Mr. Ban, your four year vision-in-the-making is a timely complement to the Davos Convention. Thank you for your leadership!