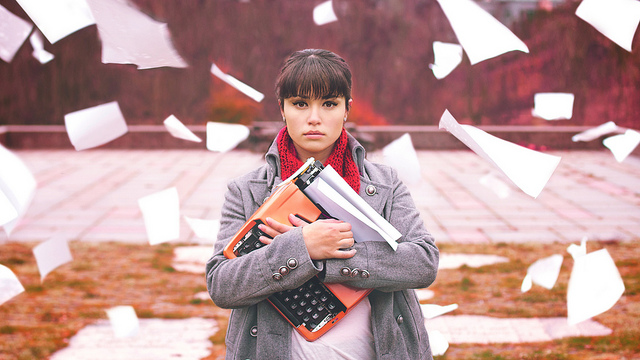 As a child I was fascinated with handwriting. Everyone around me could gracefully write out their name and complete their schoolwork while I struggled to even hold a pen “correctly.”

I would look over in awe at the various works of written art as colors glided across white sheets of paper, wondering how they possibly managed to manipulate a piece of wood with lead in the middle so that it created such delicate magic. It was a mystery to me.

Not only could I not figure out how to control the scribbles on my page, neither could I control the order of the letters and they would randomly spill out in a jumbled up mixture of chaos and disorder.

It didn’t matter if I wrote slowly, whether I focused all of my attention onto one line at a time, or whether I traced the words that were placed underneath a transparent piece of paper. And the worst bit of it all was that I knew it made me appear messy and careless and as though I didn’t know how to spell or write sentences. And that ached my heart because I was in love with words. Wildly.

Before I could talk I was fascinated with books. Rather than playing with friends, I would prefer to line my books neatly on shelves and decide which ones I would read that day and in which specific order. I now understand that my obsession with reading the same books over and over was due to my inability to absorb all of the information and make sense of it. I could read a whole chapter and entirely forget everything I had just read. Fortunately I loved the books I read and reread, so I lived in fairytales and fantasy lands and my imagination and books became more real than my reality.

I still don’t fully understand why the captivating world of words does not connect the dots on the outside of my enchantment filled mind.

For me, the strangest thing about dyslexia is that in my mind I can spell perfectly. I can pluck words from the air and spell them out loud in order and in quick succession, but, to do that same thing with a pencil or pen? Almost impossible. I was word blind, and yet I was enraptured and spellbound by words.

Unfortunately, my inability to write out words in an academically acceptable manner often meant that I received lower scores or I was judged as incapable of achieving the same standards as my peers, so I was overlooked and forgotten in the system. I also found myself in trouble a lot, either because I would get so frustrated that I would either just sit and stare in bewilderment at the work in front of me, or I would get distracted and stare out the window daydreaming of life on another planet. Or it would get so intense that I would often be overcome with extreme anxiety that rendered me unable to speak. I was judged as troublesome, disruptive or even just rude by many teachers due to their failure to understand that it wasn’t that I wouldn’t, I just couldn’t.

The worst part of all of this was, that all I wanted to do was write. I had stories bubbling inside of me and I had no way of expressing them and letting them out.

Then, one day my father brought home a magnificent vintage typewriter. I had never seen anything quite so beautiful and perfect and it became my new best friend. It only took hours before I learned to type on it and I would tell it tales of everything that had happened during my day. I remember being so intrigued by its workings and the fact that I could finally spell out my name in a clear and concise way, that I would just hit the same few keys out of absolute amazement that I could see the letters appearing right in front of my eyes, communicating with me.

It wasn’t long before the typewriter and I knew one another inside out. I would tell it all of my thoughts, feelings and worries and in return the typewriter would respond by making them readable. My confidence and self-belief started to return and I repaid them by creating poetry and prose that entertained my peers. I wrote letters to everyone and anyone that agreed to correspond with me and I would proudly send my notes out and impatiently wait for the mailman to deliver a reply. I had found my calling and I became immersed in writing my mind out, putting it into context and then trying to make sense of its inner ramblings.

I was mystified as to why my words would pour out when I was connected to a keyboard and not to a pen, although, mostly I was just grateful that I was able to communicate what was on the inside. I learned to touch type very quickly and discovered that I didn’t need to think about the words, or the letters I was writing. I just needed to feel and then write. The words almost skip right past my brain so it doesn’t interfere and jumble them up. Instead of thinking, my heart and its entire emotions radiate out and connect directly to the tips of my fingers. I type so fast that I don’t give my brain the opportunity to twist and tangle everything. I feel what I want to say, and the feelings transform into written words.

Fortunately, I live in the age of technology, which means that writing for me is no longer a painstaking and drawn out ordeal. Something that at one stage would have seemed a whimsical and somewhat absurd suggestion is now an actuality, as I recently wrote a book consisting of 175,000 words. Previously, to have hand written just 50 of those words would have caused me extreme distress and would likely have ended in frustration, tears and feelings of distress and anguish. To be so passionate about something and then not having the means in which to express them would have been a fate and existence that I could not have imagined enduring.

For many of those growing up with dyslexia today, there are fortunately electrical devices all around that enable them to convert their words to print. I have often heard people talk about dyslexia as if it is a curse that will hold them back. It isn’t. It is a tremendous blessing. Especially once touch-typing has been mastered. Neurologically, those with dyslexia think in slightly different ways to those who don’t have it. The few words I would recommend to anyone wanting to write is: Don’t think, feel. Feel the words and allow your fingertips to type.

I forget my name, when I write.

A path to my heaven.

A path to my hell.

Both take me where I need to go.