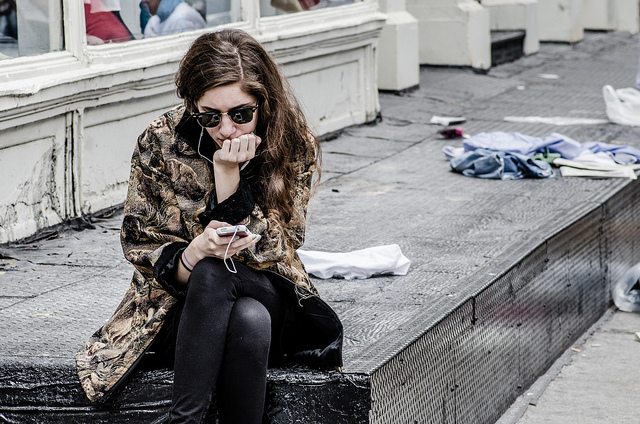 You texted back “too soon,” didn’t you? Maybe you made the mistake of calling him first.

You messaged him on Facebook, asking him if he was busy, if he wanted to go do something fun.

You broke the rules.

That time he asked what you had going on, you were supposed to lie and say you had fabulous plans with a large group of friends. This wasn’t true, though, so you were honest.

You said “nothing” and hoped that would be followed by an invitation.

Now you’re some kind of Stage Five Clinger: “Danger,” they say, “This one’ll get too attached. She’s bad news. She’s so thirsty it’s like she’s been in the desert. This one actually…cares.”

There is a game and some girls know how to play it. There is a code and you know it’s there, but you can’t crack it. The rules, the way it all works is confusing, and you sense that the odds have always been unfairly stacked against you.

I refuse to tell you how to fix whatever this mysterious thing is that is “wrong” with you—that makes you what they call “needy.” I don’t give that kind of advice. I’m going to tell you something better, and I want you to listen carefully.

There is nothing wrong with you. You do not need repairs and you really don’t need to change yourself so that you might appear more attractive. You are already attractive and you are not the problem. Don’t let anyone tell you how to love ever again.

The real problem is that we need to stop telling women how to love.

I am sick of this. My newsfeed is filled with articles and posts about trying to get women to stop being “clingy,” telling women they are needy and that they are turning men off and driving men away. There are lists of things women are doing wrong when it comes to every single interaction with a man you can imagine. Then I see how to blow men’s minds in bed, how to not “catch feels” for the guy you’re just hooking up with, because God forbid you’d dare forge an intimate connection with someone. It really says a lot about our society that we equate being in love with someone with a contagious illness. I’m sorry, but emotions aren’t viruses and you aren’t sick just because you have feelings for someone.

You’re being fed a line of B.S. that you’re driving men away by being kind, open and expressive; instead, people tell you to be hard, closed off, and impervious to your feelings. Take what you can get too, they tell you, and just have meaningless sex because that’s so much better than being alone (no it is not). They want you to think that building connected relationships with people is wrong and weird and undesirable, but it isn’t.

Our society is sick. Everyone around you who believes these things is sick too.

You are well. You are the one who is okay.

You are the one who still believes in love and magic and miracles. Stay this way and cherish this aspect of yourself. Cherish everything about yourself.

Our culture enables bad behavior. We say that it’s okay to objectify women, to have sex with no regard for the other person (or at best very little). We think that “real men” are supposed to be players and emotionally unavailable jerks and we are telling women that it’s their fault and if they were just different, then men would treat them better.

I cannot support or relate to this level of nonsense.

“Needy” Girl: There is nothing wrong with you or how you love or that you love. You are fine exactly as you are and you deserve to be loved and respected as is. When we call women needy, we are playing into a cultural sickness that tells men that they can’t have feelings and be vulnerable and still be masculine. Even worse, we are telling women that they need to be more like this wrong idea of men instead of how they want to be.

When we do this, we are telling everyone to stop feeling everything and to lose all compassion and stop wanting to have real connections because that’s a sign of weakness and inferiority.

We are creating a world where we have conditioned everyone to equate emotion, compassion, and love with weakness. Eventually we’ll just become a bunch of robots who do nothing but stay home and sext on our phones with 15 different people at once, none of whom we know, care about, genuinely desire, or even see as individuals.

It’s not the “clingy” women who need to change. We need to be teaching the men how to love, to really love fearlessly, and how to find true intimacy more rewarding than a drunken one night conquest. Everyone, it’s okay to risk feelings and to have a heart and to experience emotions and to reach out to other people.

So look, beautiful, deep, wounded, passionate, brave, Needy Girl, it’s not you that’s the problem. It’s everyone else, and it’s hard to be a rainbow unicorn in a field of brown ponies, but you got this. You are a gentle warrior, and the way of the warrior is a tough path, I know. Resist everything the world tells you about how you should be—it’s wrong.

Be courageous, even when you’ve had your heart broken yet again.

The Key Difference Between Having Needs & Being Needy.

Why I’ll Never Apologize for Being “The Needy One.”