In Hot Water: What Whales are Telling Us about Climate Change. 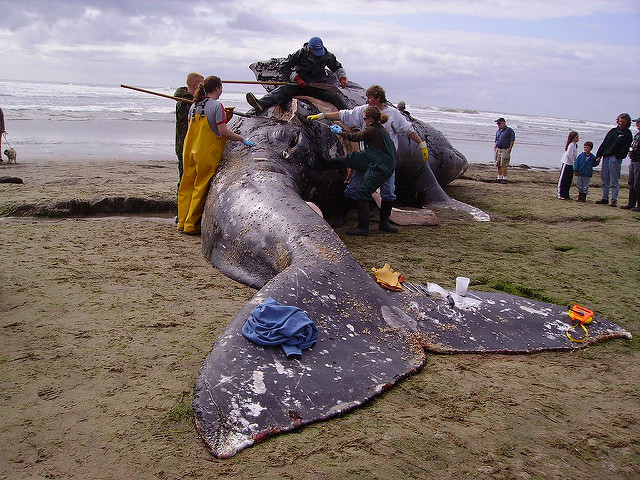 Thirty miles off the coast of San Francisco, in the misty, cool coastal waters that lick the shore of northern California, rise a small, uninviting group of islands with jagged, lithic beaches and scrubby plants weathered by millennia of turbulent storms.

On clear days, these islands can be seen from the San Francisco shoreline through the spray of gulf waters.

Native Americans knew about these islands for millennia before colonials came to claim them as their own. Perhaps they understood something that has long since been forgotten when they refused to go there, prophetically naming them the “Islands of the Dead.”

Throughout the early 1800s, Russians and New Englanders alike set out to the tiny Farallon Islands, as they are now called, stepping along rocky shores with weapons in hand, systematically slaughtering thousands of peaceful seals. Scientists estimate that more than 150,000 northern fur seals and countless elephant seals were butchered, until none were left.

Then came the California Gold Rush. Miners, bankers, and grocers, along with laundries, whorehouses, and other industries they brought meant an increased demand for food and other goods.

Once again, the Farallon Islands were easy to exploit, this time for bird eggs. An estimated 14 million eggs were taken from nests on the islands, destroying the vibrant bird species that called them home and kept the ecosystem in balance. 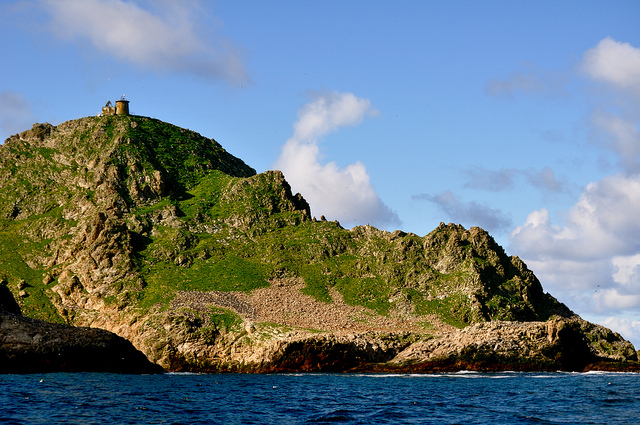 Today, save for a research station, the Farallon Islands are carefully protected against human interference. Native birds, seals and plants have been reintroduced, and are beginning to thrive.

But it is what is now happening in the waters around the Farallon Islands that has researchers concerned.

Endangered blue and humpback whales, gray whales, killer whales, and great white sharks are among the marine life that pass by the islands regularly as they follow krill and other food sources to cooler waters during summer months.

But this past year, marine biologists have recorded these massive migrators in record numbers. A year ago, 115 endangered whales were recorded near the islands on a single day, prompting boat warnings to be issued.

These numbers are only expected to increase, and they are a loud alarm for human beings that something wrong is happening.

The oceans are warming, and as tiny krill and sardines become more concentrated in the decreasing available areas of cool temperatures, whales, sharks, cetaceans and other sea life are following. They’re being spotted in areas they have never before been seen, and they are also crowding into cooler spaces, like the waters surrounding the Farallon Islands, in legions.

Blue whales, nature’s gentle giants, are amazing creatures. Adult whales weigh in at an incredible 200 tons; their tongues alone weigh as much as an adult elephant. Yet only 3,000 to 5,000 of these massive, yet vulnerable creatures remain in our waters.

A century ago, it was whalers who were their biggest threat. Today, it is climate change.

A single adult blue whale can eat up to four tons of krill each day. For thousands of years or more, this was no problem because krill have easily reproduced in cool antarctic ocean waters. But today, scientists have proven that krill are not able to survive well in warming waters. Their decreasing numbers will, no doubt, mean death for blue whales, as well as for seals, other species of whales, and other ocean life.

Climate change is happening, and it’s happening much faster than scientists have anticipated.

From ocean acidification, commercial fishing, plastic pollution and noise pollution, to military exercises, excessive commercial fishing and bycatching (entanglement in fishing gear), our ocean life is in big trouble, and we are the reason.

According to the Nobel Foundation’s Intergovernmental Panel on Climate Change, our arctic temperatures have increased at almost twice the global average rate in the last century. This is not a coincidence.

It takes willful ignorance to fail to recognize that human industrialization has had a dramatic effect on what is happening to our planet.

Like our land ecosystems, everything in the ocean is interdependent. The National Geographic Society noted that we are already seeing a decrease in krill and plant life due to warming ocean temperatures. Coral reefs are dying at alarming rates, too. These are food sources and ecosystems for the foundational layer of all ocean life.

Many ocean creatures, large and small, are susceptible to stress. Changing feeding patterns, displaced migration patterns, increase in crowding in viable areas, and other natural factors, as well as temperature changes, pollution, and changing acidity levels, are leading to increase in illnesses and diseases among whales, dolphins, sharks, and more.

It is for these reasons, too, that we are seeing record numbers of beached whales worldwide.

We can no longer turn our heads in apathy to melting glaciers, changes in weather and climate patterns, water acidity and salinity, and other signs that the earth is trying desperately to adapt to human activity. There is simply too much at stake.

We closed our eyes when plastic began to outnumber plankton in our oceans. We denied that agricultural runoff is killing life in all of our waters.

But we cannot deny the pleas of the largest of our fellow Earth inhabitants.

We are stewards of the Earth, and keepers of gate for life throughout our planet. What we have done in the past and what we will do now to mitigate our own damage are, quite literally, life-or-death decisions.

We can only hope that the Native Americans who held the Farallon Islands sacred and forbidden were not correct, and that these Islands of the Dead will be the keepers of life—both marine and human—for all of time.

It’s up to us to change. For the whales, and for all of us.