Telling your Husband the Truth (about Not Wanting to Have Sex Anymore). 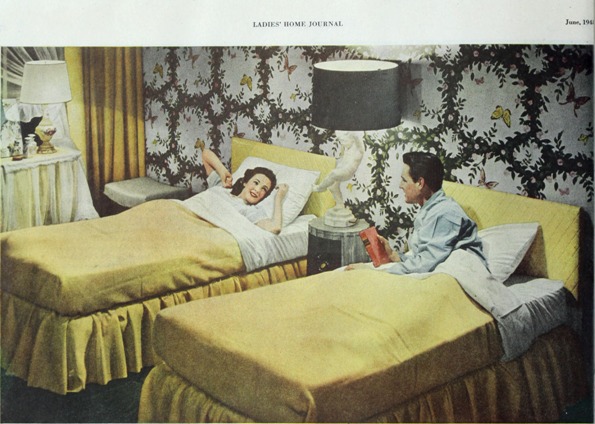 I was lying spooned in front of my husband early one morning in bed, and wanting to see if he would respond romantically, I pressed up against him.

When he didn’t push back into me, I knew he was telling me something he’d tried to tell me before.

“The truth is,” he finally whispered, “I know what you want, but…” I could feel his breath on my neck. “I just don’t think I can give it to you anymore.”

I didn’t move. Give him time. Wait. We’ve hit this wall before.

“I know it can’t be like it used to be,” he said finally. “Everything hurts me all the time. I just can’t walk past that constant pain into the valley of pleasure.”

He laughed, saying how corny he sounded, and I laughed too.

But it wasn’t funny.

It was sad. It was the end of something.

Over the course of time, my husband’s illness had drained sexual expression from his limbs. He had to think about moving before he moved even while he was moving—and thinking about it took him away from any naturalness, leaving us both wondering what the hell had happened, or not happened.

“I just don’t feel like I can get there anymore.”

We’d talked about options. About other ways to do other things. Told each other that it was okay, it wasn’t over, it was just different.

Then that morning of the spooning, we lay there in our deep bed with both of us more or less realizing that no matter how much we tried or how much we talked about it, it was impossible for either one of us to get there anymore—not together anyway.

I shifted a little in the bed. Should I just say it? Right out loud? Would he feel rejected?

But he’d heard it all before—all, except one thing—the truth:

“Maybe it’s time to stop trying,” I said. “Maybe it just hurts too much.”

An awful flutter rose in my throat. It had to be said—right out loud—it had to be. The wall built of not saying it was crowding out so many other ways of understanding each other and of there ever being any hope of us being able to get through that wall to the other side.

He struggled onto his back, and as if to keep inside what he couldn’t keep inside any more, covered his mouth with his hand.

I could see from his gesture. I was right. It did hurt too much—for both of us.

He cried out in strangled sobs and began shedding the deep, wrenching tears that I’d never seen until his diagnosis had sliced open our lives.

Sick or well, we all have things to grieve over. It’s just more obvious to those of us with a diagnosis of some kind—that day after god-damned day, we leave behind something that we didn’t want to leave behind, like our once robust sexual selves.

I knew how he felt. I was feeling it too.

Maybe it would do all of us some good to lie in our beds sobbing every now and then. Maybe not sobbing is what causes our bodies to freeze up in the first place.

While there were many more conversations to come, and many reasons beyond the one of that morning that would bring about the ultimate annihilation of our sex life, I don’t regret what I said that awful morning. I had spoken my truth out loud. My stomach trembled with just what my words would mean to me and to us, but I remain grateful that I found the courage to utter them.

It paved the way.

I had been living with wanting things to be different than they were, with holding onto what had been and to not wanting to believe that it was over. I was feeling bitter and angry. When I let go of the wanting, gratitude and relief flooded into the space that holding on had vacated.

I had done the right thing.

Over the course of time, my husband and I would recognize that we each wanted love in our lives in a more active, physical way and that it was too late for us to have it with each other.

At the end we were able help each other through the mourning, reminiscing and sharing with each other as we divided up our lives and possessions in warm and loving ways.

There was even humor.

One night he came over to me at my computer.

“How about we go out for one last dinner and a movie?” he asked.

Boxes of household items and various suitcases were packed and stacked in the family room in preparation for the movers.

For a split second, I saw on my husband’s face the kind of shy smile I hadn’t seen for a long, long time.

“Oh, you know. A perfect movie for us,” He responded teasingly. “One with no sex in it.”