The Incredible Lesson in Courage I Learned from a Drag Queen. 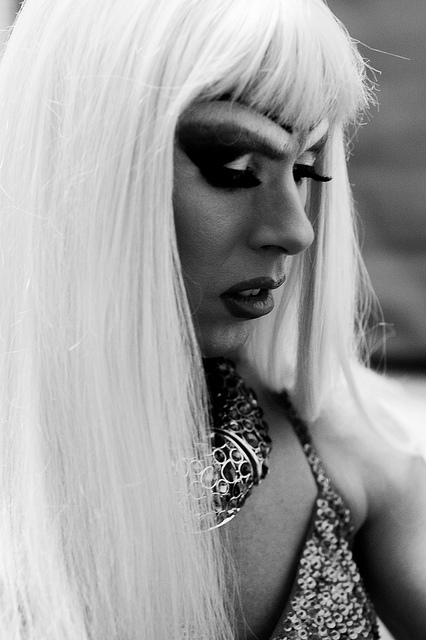 One of the best friends I ever had in my life was a gay man.

“L” would call me every morning before I went to work. “What are you wearing sweetie?” he’d say, and I’d tell him and laugh and tease him that he was just asking because he was jealous that I got to wear such cool stuff to work.

He called me his own personal “fag hag.” I don’t even know if they still use that phrase any more but I wasn’t insulted by it in the least. I loved it.

Whenever I had to go to a formal event for the hospital I was working for he would be my “date.” He’d put on his tux—yes, he owned his own tux—and pick me up in my beautiful dress and he’d say, “I can pass, don’t you think?” (Meaning he could pass for straight.)

Of course he was just about the most fey man I ever knew and, of course, he couldn’t “pass” but I would tell him he could and we would be the best looking couple there.

L was a Listening Friend volunteer at the hospital and me being the Director of Volunteers, he would often times come by my office for a visit before he went on duty for his shift.

It was the early 1990s, a time of lingering confusion and fear around who could or couldn’t get AIDS, even in hospitals, and “duty” for L was sitting at the bedsides of AIDS patients who were in their terminal stages and who had no family members or others to be with them.

In his role as a Listening Friend, L would sit quietly with his patients, waiting for them to speak if they felt like it, listening to their stories if they wanted to tell them, and otherwise be a compassionate, non-judgmental presence at a time when there was plenty of judgmental presence to go around.

One afternoon, after the particularly wrenching loss of a young man to AIDS , barely out of high school, L came by my office.

“I think I need you to be my Listening Friend,” he’d said.

That was the afternoon that L told me his secret and I learned what—as he put it— “pushing the envelope” meant.

It was when I learned that in order to accept yourself 100 percent—truly and completely accept yourself exactly as you are—you sometimes had to do things that other people might shame you or ridicule you for.

What if, in order to be absolutely 100 percent true to myself, I had to push the envelope the way L did?  Did I have what it took to live my fullest self?

The next weekend, L having told me his secret, I went to see him perform for the first time. Dressed in his drag persona, he was beautiful, dazzling, truly a queen—all six feet four inches of him.

I felt him looking at me from the stage and hoped that he saw on my face just how much he meant to me and how proud I was to know him.

To me, he was a man who was unafraid to sit with hospital patients, old enough to die from AIDS while still young enough to be going to high school. He was a man who came to my house and helped me paint the walls in the bathroom bright red saying, “Who gives a damn what people will think.” A man who joked about wanting to pass when he and I both knew that while he wasn’t ashamed of being gay, he also wanted to be accepted for it.

At the end of his set, a spotlight followed L from the stage as he came over to me in the audience and, coming around to face me, lifted himself up onto the bar.

There he sat, two feet away from me, singing his entire final number while looking directly into my eyes.

I flew to Colorado to his mother’s house to say goodbye to him. It was just about 25 years ago.

I loved L…and still do. But mostly, I respected him and was grateful for him.

He was the person who taught me just how much courage it takes to be 100 percent true to yourself—no matter who that self is.

The song he sang to me that night when he sat on the bar?