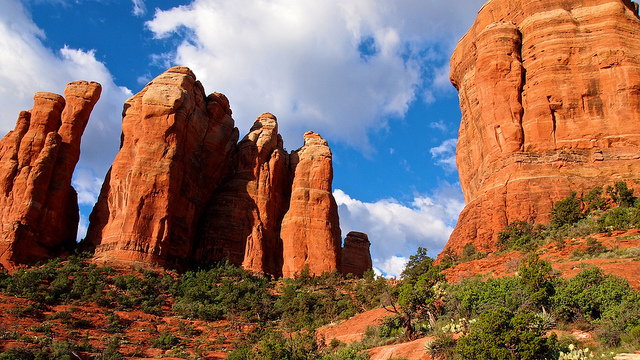 I am a creature of logic. I like numbers and data, and to this day, the wise words of a high school teacher, “Know your sources!” ring in my mind at least once a day.

Tell me meditation changes brain waves and I want proof. Explain social injustices to me and I want statistics. Show me these things and, once I’ve fact checked and compared who, how and why, I’m likely to be a staunch advocate for whatever I find that rings true.

I have to admit, the skeptic in me snickered a little when I first heard about these magical spots. Years ago, I thought vortexes were mostly associated with alternative hippie granola types who believe world peace is mandatory and shaving is optional. It seems a little far-fetched that certain places in the earth would emit a subtle but powerful force, or that standing in or near a vortex could alter our own energy. To my rational mind, this logic is the kind of thing that leads to those shops where tourists are all-too-eager to buy cheap dye-dipped stones thinking they’ll bring about magical changes in their lives.

Don’t get me wrong. I’m no hater. In fact, now that life has seasoned and cured me, I lean far more toward the crunchy side myself. My point is that the concept of energy centers has been a little “underground,” if you will.

Sedona, Arizona is one of the world’s most revered home of these magical spots. It is in these red rock mountains where I learned the lowdown about these sites, and why they aren’t so crazy after all.

In the case of Sedona, it’s a word used to mean “sacred site.” It’s a place that combines abundant natural beauty with a hard-to-define feeling of well-being and connectedness that people find there.

Before you feel a need to create a space and process that download over a cup of kombucha, you should know that sacred places like these have been found all over the world throughout recorded history.

Two things characterize sacred spaces: tremendous natural beauty and a recurring phenomenon of people experiencing unusual reactions from being there.

It’s not a matter of New Age as much as it’s a matter of ancient wisdom. From Machu Picchu to the Pyramids of Giza, sacred places have lured souls for centuries, and those who have visited Sedona are fortunate to have experienced such a place without leaving the continent.

Sacred places are divine creations, and you can define “divine” any way you want. People from many different faiths experience something special in Sedona.

It isn’t about religion; it’s about spirit. Any place can have its own energy, and in the vortexes of Sedona, many people find that feeling of connectedness that so many of us long for.

The idea of energy centers isn’t just based on warm, fuzzy feelings. What makes me tingly inside is that science is filling in some of the blanks. In the 1970s, a scientist named James Lovelock formulated the Gaia hypothesis, suggesting that the earth’s atmosphere, oceans, geophysiology and other systems are interrelated and that the earth itself is a single living organism.

At first, this radical idea was ignored and dismissed as a neo-pagan, New Age religion. However, after a few tweaks and a lot of scientific banter, many of the ideas presented by the Gaia hypothesis are now being used to understand geophysiology, earth systems science, biogeochemistry, systems ecology and climate science.

It does more than make good coffee shop fodder for the white coat types. Currently, researchers from the University of Maryland and Western Washington University have discovered a way to track chemical elements that could ultimately prove or disprove the theory. In the meantime, the perspective that the earth functions as a single living organism has added some explanation for otherwise mysterious processes that affect us all.

If proven, it will validate what ancient people have said for centuries and what environmentalists have been proclaiming for decades: the earth is alive.

A vortex then is a place in nature where the earth is exceptionally alive and healthy.

So if a vortex is simply a center of life-force energy, how is that energy measured?

Well, for one thing, it’s not magnetic energy like iron in Sedona’s red rocks may suggest. Despite the iron oxide that gives them their beautiful terra cotta color, Sedona’s mountains are not magnetic. It’s also not electrical energy.

It’s an esoteric energy, and there are growing volumes of scientific studies proving its existence and validity, including work by Stanford University Professor Emeritus William Tiller and Paul J. Rosch, clinical professor of medicine and psychiatry at New York Medical College, among others.

But it’s human experiences themselves that prove the existence of such energy, as they have since the Southwest’s most ancient people, the Anasazi, settled here before recorded history.

If you’ve ever experienced a woman’s intuition or a bad feeling about someone, you’ve felt subtle energy. Some call it a sixth sense; some call it chi; some call it life force.

It is this that people often find in Sedona, and for those who do, it is undeniable.

It isn’t about finding a particular “X-marks-the-sacred-spot.” It’s about connecting to nature so beautiful, as humans have for millennia, that makes it special.

No matter how we process it, we are all surrounded by magic and wonder. We don’t have to go to vortexes to find it, but we may find that it is less elusive in these concentrated energy centers.

It’s when we stop seeing the beauty that lies within nature—any nature—that we stop appreciating those gifts. Whether you meditate on an outcrop of an ancient red mountain, or walk through the forest and notice tiny flowers in bloom, there is connection and there is peace.

Maybe it’s a coincidence; or maybe, just maybe, creation whipped up something a little extra special. As the science behind the wonder continues to evolve, it may just prove what people have been saying all along.

Vortexes may not be so “out there” after all.