Update: This image of a little girl lying next to her doll after the attacks in Nice goes viral as we try to digest and express our horror at another pointless loss of life. It hauntingly echoes that of little Aylan Kurdi, the Syrian three-year-old on the beach who caused a worldwide outcry over the refugee crisis in Europe. 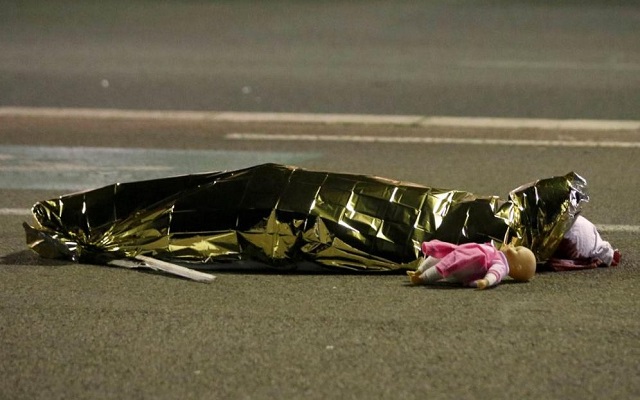 I heard the news this morning on the radio while driving my kids to school and nursery.

“At least 84 people have been killed, including a number of children, after a lorry ploughed through a large crowd celebrating Bastille Day on the seafront in Nice, France.”

“My wife is deaf but she recognised the sound of gunfire” – #NiceAttack eyewitness
Latest: https://t.co/sjqC5oEyxM https://t.co/RYxx2MbYsV

I rarely listen to the news with my kids around. I find it so hard to explain it all to my eldest, who is at that age when he is asking questions about the world, and most of them start with “why.”

The “why” of this kind of thing is almost impossible to explain. I can barely get to grips with it myself.

But I think in the end the “why” is less important than the “what now?” It is a terrifying thing to think that we could go along with our children one day to something as normal and traditionally fun as a fireworks display, to be mowed down by a cause-crazed extremist with a truck, or a gun, or whatever their weapon of choice. It’s these kinds of things that make my heart shudder when I see my children sleeping at night…that they, that none of us are safe in the world while this terror and hate exists.

The images of the smallest, most innocent victims of this madness, hit me hard, just as they did when the last photo of a dead child went viral. But, wait, oh…we’ve forgotten about all that now, haven’t we?

It’s what we do. Probably because it hurts so much. We can’t bear to look at it much longer than the time it takes to digest the headlines, or to turn down the radio.

Now, I explain to my son that there are people out there who hate and who hurt other people because of this hate. I remind him this is why it’s important for us to love, and to love hard. To be kind to our friends at school, and to the kids who elbow us at the table at snack time too. To be kind, but not too soft. To stand up for ourselves with love in our hearts. To hug our brother and our mom and our dad like we mean it when we say goodbye…every time, (because we never know what might happen, although this I don’t say out loud.)

I remind him that although there are baddies out there, there are also lots and lots of goodies. And that he is one of them.

I cannot change the scary world we, and my children, live in but I can hug them tight and make them laugh. I can smile at my neighbours and at people I usually don’t greet as we all hurry to drop our kids off. I can take a breath and stay calm and let someone else in when the school run traffic backs up. I can look the new, shy cashier serving me at the corner shop in the eye and thank him for his help. I can call a friend I haven’t spoken to in too long and see how they are doing. I can hold myself accountable for my own actions and reactions each day.

We can all do so little, but also so much in the wake of yet another attack. Find some small way to love harder today. The world needs it.

“Whatever lessens suffering in yourself and others, that is right. Whatever increases suffering, that is wrong. The answer is within you. When you are free of pride and prejudice, when you are calm and attentive, a light will shine within you. Through meditation and through being mindful you will find your own knowledge of rightness. You will be your own light.”  ~ Satish Kumar, The Buddha and the Terrorist.

Tragic paradox that the subject of #NiceAttack was the people celebrating liberty, equality and fraternity