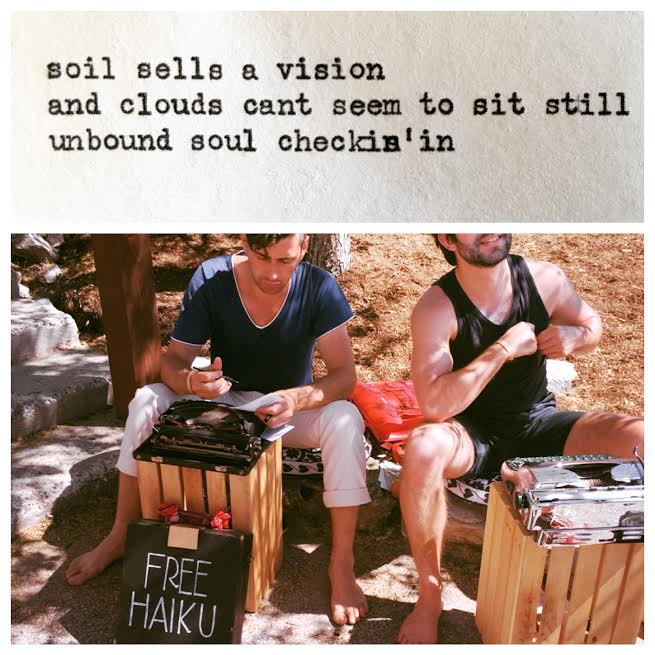 As I walked up the concrete steps toward the main field at Wanderlust on Stratton Mountain in Vermont, I saw two young men sitting on rocks that bordered the edge of a landscaped tree.

Their sign, resting against wooden crates that acted as desks for their vintage typewriters, read “free haikus.” A line of girls stood in front of both of them while others lingered on the periphery, reading their personalized poems.

My intention was to veer left and sift out which vendors had the most affordable vegan food, but I was drawn to one of the poet’s pensive cerulean eyes and freshly manicured beard.

I had yet to feel the sense of connection that I was expecting, so I waited in line with the others, hoping for an authentic experience with this guy. He introduced himself as David and instructed me to say anything to help prompt the haiku. I chose the word “timelessness,” an elusive idea that I often ponder. I watched David’s eyes roam his internal cosmos for inspiration. I felt him searching for truth, not wanting to let me down. Five minutes later, I was given a freshly typed haiku on a business card-sized piece of paper:

Although his words created a nice visual in my head, they didn’t resonate on a personal level. Against my greatest desire not to, I took a picture of the haiku, along with the two poets and their set up, and posted a pic-stitched photo on Instagram, altered with Lark or Clarendon or some other bullshit filter. I tagged @thehaikuguys and hashtagged #Wanderlust2016 and #FindYourTrueNorth. I drank the social networking juice, hoping that if I conformed, then I would feel a part of it all. That never works.

Until that point, my experience of the festival had been lackluster. I appreciated it at face value, but the seeming emphasis on physical appearance and achievement over spiritual evolution left me feeling disengaged. Prior to arriving, I had been living and working at an intentional community for two months with tree huggers, energy healers, spiritual seekers, witches, wizards, freaks and geeks. In other words, “my people.” I found myself headed to Wanderlust after a close friend, who I had helped to secure a teaching gig at the festival, asked me to come along as her assistant. I couldn’t pass up the opportunity. My orange and navy paisley bellbottoms and oversized hemp shirt didn’t mesh well with the overabundance of luxury athleisure wear. But I had to acknowledge that these were my people, too. A year and a half earlier, I would have blended in perfectly. Then, it was still mostly about the outside. I was more concerned about a six-pack than my seven chakras. However, unsolicited spiritual messages, some subtle while others blatant, suggested that it was time to dive deeper. I enrolled in a teacher training program rooted in spirituality and tradition with a credible lineage and began the journey within.

A year later, I find myself headed down a path whose route is still hazy. I can only see a few feet in front of me, but there are mile markers along the way that inform me I have yet to stray too far. Wanderlust was one of these signs. On the ride home, I had to laugh at myself. I had made so many assumptions about the other attendees, some of which might have been dead on, but it didn’t matter. We all came to Wanderlust seeking connection, compassion, and community, and there I was, talking the talk but not walking my path. Where was my compassion, my love off the mat? There was suffering there, too, I just didn’t see it right away.

When I arrived back at the intentional community, I found the haiku folded in my wallet. David hadn’t let me down. I realized that Wanderlust was the soil that sold a vision of possibility and potential. That’s why those people went. That’s why I decided to assist my friend. It was all there, just not exactly how I wanted it to look. The clouds that can’t seem to sit still were my impermanent and illusory ideas about myself and others produced by an unreliable mind. Who was I to judge anyone? I was the unbound soul checking in with itself, remembering that only love is real. Wanderlust was a temporal antidote from an unpredictable reality in which we are killing each other daily with our thoughts, words, and actions. I needed Wanderlust to remind me of that, especially at a time in which fear is breeding hate and violence at an unbelievably numbing rate. It’s so easy to forget that we’re all in this together, that we’re all here to walk each other home. So thank you, Wanderlust, for reconnecting me with love, the only truth I’ve known. 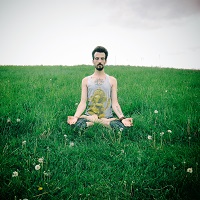