Sometimes I Want to Disappear.

Sometimes I want to disappear—but this isn’t a cry for help, and I would never try to kill myself.

Sometimes I want to disappear, but I’m not suicidal, and I don’t equate “wanting to disappear” with wanting to die. Not that I’d mind dying, as long as it were quick and painless. I don’t fear death, but that’s a whole other story.

Sometimes I want to disappear. And I don’t mean pack up my bags and hit the road. I mean cease to exist. Vanish. I know that sounds like a death wish—but trust me when I say that this is something different.

The first time I experienced this feeling was several years ago, as I was standing on my parents’ dock, looking down into the lake. The water was dark. I felt sad and confused, but not suicidal. I’d just returned home after a few months of travel and was having a hard time adjusting to being back in the states, and to no longer having a partner and playmate by my side 24/7. Poor me, first-world problems.

I wanted to dissolve. I wanted to be done—I know, again, that sounds suicidal. So much so that I even had to question myself momentarily, “I know you’d never kill yourself, but are you sure you wouldn’t be considered suicidal?”

But it didn’t fully make sense to me how I could have this feeling and not think I needed professional help. Maybe I did need help, but was afraid of being misunderstood—I feared being told I was suicidal when I knew I was not.

Can’t I just have my existential depression, and dark nights of the soul, in peace?

And then, a couple of years after that day on the dock, my Sexual Awakening for Women teacher, Shakti Malan, led me through a guided meditation. She spoke of “the blackness,” the darkness we see when we close our eyes and drop deeply into stillness. Into consciousness. Into what she calls the “deep masculine.” The deep masculine is that resting place behind the busyness of the mind.

And suddenly, I felt excited rather than meditative, because that is what I was yearning for all those times I wanted to disappear. I wanted to be held by the deep masculine, in that resting place, that peacefulness and clarity of pure consciousness. I wanted an end to the struggle, the noise and a feeling of separation. So, upon hearing this concept of the “deep masculine”—that pure consciousness—something clicked.

However, it’s not like I had felt some sort of joyful or enlightened type of desire for oneness all those times I wanted to disappear. It felt sad and distressing to not want to be here, and that’s because the truth is that my desire to disappear wasn’t only about oneness or stillness or resting into that deep consciousness.

As a sensitive soul, who often feels like some sort of alien on this planet, there’s a yearning I feel sometimes to leave this realm, this earth plane, like there’s somewhere else I belong. And yet, I know I belong right where I am. And now, I also know that it’s also in that blackness, that deep consciousness, that I can feel at peace wherever I am.

I’d like to imagine that the desire to escape and end suffering, that which is felt by those who do commit suicide, could have been alleviated by learning something like meditation. Learning how to drop into that blackness, while still living and breathing.

But what do I know?

All I know is that there’s always a way out of pain and suffering, and I firmly believe that suicide is not it. Perhaps one way out is to simply realize that pain and suffering are natural parts of the human experience. So what can we do?

For me, Sheng Zhen, a heart-opening qigong, is one solution. Or meditation. Or just talking about it, like I am right now. Or walking in the woods. Or dancing it out. Or lying down on the ground and feeling held by the earth—all of these things, and more, help me love this life and want to be here.

Sometimes I still want to disappear. And so I do—into deeper consciousness. Into acceptance. 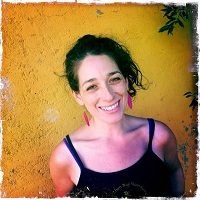