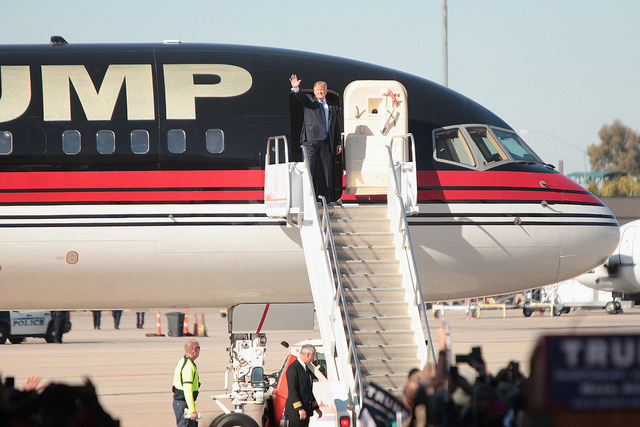 In the wake of Donald Trump’s latest adolescent tirade against women and their private parts, I cannot stomach, let alone pussy-foot my head around, how this wannabe of an orangutan has gotten this far in the presidential election process.

“To my orangutan friends, please accept my apologies in earnest.” (Because on the contrary, every orangutan and orange-haired monkey I have ever met has been quite decent to me.)

Furthermore, as an Asian-American woman with two mixed-race daughters still fervently searching for their respectable paths to womanhood, thanks in part to Hilary Clinton, I have vowed to teach them that any man who who would treat them with such vile disrespect will never hear from us:

“We love you long time!”

We also don’t care if you are a star or a wishful billionaire, and we will not let you kiss us. As Asians and as women, we also refuse to bow down to you, walk 10 steps behind you with our little Asian feet, or give you “happy ending.”

How’s that for some misogynistic racist sarcastic rhetoric?

When I first heard Trump talk in what he “perceived” to be a funny Japanese accent when he pursed his angry and scrunched-up little Donald lips, mimicking: “We Want Deal” during a stump speech, a feeling of nausea and revolt ran both within and without my every Asian orifice.

I apologize, “Gomen’nasai” at once to my sweet Japanese-American mother who has never missed a vote—for using such inappropriate and ugly imagery.

Trump was speaking in his usual xenophobic tone when he promised his W.W.F. and Cartoon Network-inspired audience that he would make a better President than Hilary Clinton or Jeb Bush.

He was referring specifically to supposed trade talks and deals when officially meeting with Japan, China or Korea as an actual President of the United States.

Oh yeah! Just throw all of us Asians into the same boat, after all, we all seem to be fresh off of either one boat or another.

And of course, the Trumpinator happened to guess right during his desperate wannabe Borsht-belt style routine— that most Asian-Americans would not make a fuss or wink a slanted eye when being made fun of or publicly and disgracefully mocked.

Growing up Asian in America is not easy. Just, “don’t ask any Asian in this country and they won’t tell you.”

As a kid, we are often told by parents and relatives that you must be successful at all costs, but never, ever complain or kvetch, no matter how much you are suffering or being abused.

Actually, suffering quietly and without any emotion shown whatsoever is part of the unsaid Asian mantra. Better to commit harikari and die on your own sword then ever confide in a friend, therapist, counselor, or financial advisor, especially when you may need them most.

As for me, I can only explain my own personal outcry at The Donald by the fact that while I am only one-half half Asian, I am also half Jewish, which carries with it a much different racial and ethnic stereotype.

This may include the anti-Semitic presumption that the Jewish half of me is prone to chutzpah-bossy-type outbursts, and only with my own monetary and ownership interests in mind.

You only imagine the slurs I have heard growing up as a Japanese Jew. Both my father’s Jewish tribe and my dear ma’s Japanese people really seem to be raw and ready targets for fear-mongering leaders who spit slurs against us because we dare to be successful.

And this carries with it the message that our success somehow makes it harder for others to make it in America.

It takes a lot to ruffle up my half-breed feathers, but the mimicking of a supposed Japanese business person speaking in broken English really got me.

Just as Obama is apparently only half-black, I am only half-Japanese. But you see, that word “only” is not a meaningless word, but can, in actuality be one that can reveal politically and socially dangerous assumptions, intentions and often-realized goals.

I can assure you that as child of a parent who is non-White and of 100 percent Japanese descent who struggled for equality and survival after the Second World War when Japanese Americans were interned simply because of their race, there is no such thing as “only” anything.

Maybe it’s because my mother is Japanese and has owned her own business for more than 40 years and still works seven days a week.

My first memories are similar to many Asian kids in the United States, as I remember my three siblings and I often working tirelessly at her business after school and on weekends without giving it a second thought, as we considered ourselves to be anything but second class citizens.

If anything, we quietly worked steadfast and with a grand sense of pride that was earned only through the realized ethics of our hard work, a positive and idealized “American attitude”, and the gumption and sweat often only attributed to ambitious or even naive immigrants.

I also recall more than a few times when people came into my mother’s place of business and made racist comments—only after she refused to give a discount or refund an item that the customer had damaged on their own.

In my mother’s mind, not only was “the customer always right.” but even if they were not, we must be respectful and fair-minded—sometimes at a cost to our own business, and to our own piece of mind and conscience.

I once dared to ask my mother why she didn’t speak up for herself.  She answered that it didn’t matter what they said, and that we were all lucky as a family to be doing so well in business. She followed that up with, “Don’t mention it again.”

What’s really strange is that so many Americans seem to be blind to The Donald’s potent and obvious racist rhetoric as he uses fear and anger as his main stump stance.

While his brand of nativism and racist branding may be ghastly obvious to the Hispanic-American community and to other non-white members of the voting public, most Asian-Americans have been keeping pretty tight-lipped and downright silent when it comes to the politically incorrect concept of being Oriental, and the bashing that comes along with that.

My mother’s generation, especially after the bombing attack of Pearl Harbor, have chosen to “largely” be silent when it comes to their own fervent individual dreams about what it means to be an American. As her older brothers fought bravely during World War II for the 442nd Battalion, the most highly decorated infantry in United States history, she remained in her words, a “good American girl,” just as she always had been.

However, when it comes to adding “Asian” to “good American girl,” this is a narrative that has more often been not, been both misunderstood and ignored due to an apparent lack of “sensational” makings for relevant headlines or tight soundbites for any 24-hour news cycle binge and deserved purge.

But as for me, a third-generation Japanese-American woman and full-fledged journalist, samurai and mother of a politically awake samurai, I have grown weary of standing silently by as people who “look like me” simply turn their flushed cheeks as racist slurs are spat and back slapped in our faces.

And I will not walk 10 steps backwards as I admit this.

As for my teenage ninja daughters, I am teaching them that “the act” of keeping silent about racial epitaphs and dangerous verbiage can easily lead to eventual self-hatred and outright acts of carnage, often in the name of political expediency and fear.

“It is your duty,” I tell them,  to speak up, speak out, and to speak loudly whenever they know that political slurs are not only accepted, but encouraged, and especially when it is by their own family, as well as by members of their own proud and silent community.

Yesterday while helping my youngest daughter with her homework, CNN was once again playing a soundbite of Trump talking about how “if he were President, those people from Japan and China” wouldn’t stand a chance with him.

“Those people?” my daughter asked. “What does that mean?”

Out of the mouths of babes, I thought.

I answered her that, “We are those people,” and that whenever anyone speaks freely and hatefully about a group of people, “We should all take offense.”

Being her mom’s daughter, she came back quickly with, “I will take the offensive position.”

Hopefully, we can teach the next generation of Asian Americans that keeping quiet is not always the best thing we can do to save face.