How to Have a Powerful Conversation. 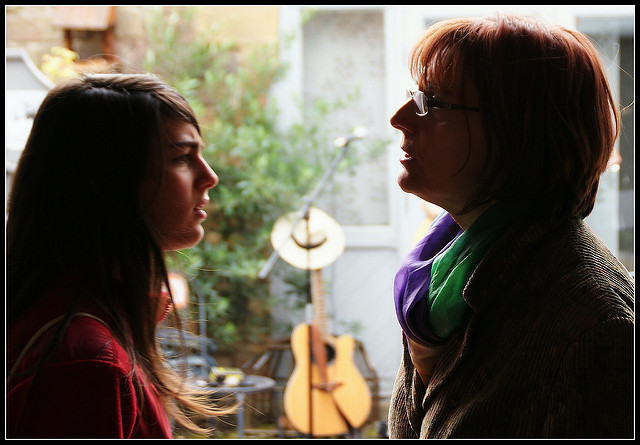 “A conversation, even a brief one, should have all the best features of any functioning human relationships, and that means genuine interest on both sides, opportunity and respect for both to express themselves, and some dashes of tact and perception. Conversation can be such pleasure that it is criminal to exchange comments so stale that neither really listens.” ~ Barbara Walters

I walked into my favorite restaurant and was pleasantly surprised to see that our table was reserved for only four, rather than the eight that were supposed to meet up. The other four people had cancelled for different reasons, and the three that remained were the ones I was most comfortable with.

Three hours and two bottles of Bordeaux later, we were still talking.

The conversation flowed well. We touched on many varied topics that moved us in many different ways.

At around 1:00 a.m. the restaurant kindly made let us know that we had to leave. We hugged and said our goodbyes. I left with a glow on my face and a stirring of my heart. From the looks on my friend’s faces, they had the same feeling too.

That is the effect of a powerful conversation.

We all need to belong, an inner human need to be part of something larger than us. We do that best when we connect authentically—where we feel seen, heard and valued. This happens when we get sustenance and strength from that connection.

What is a powerful conversation?

It’s not small talk—discussing the weather, world events, or other generalizations like our kids or business’ success. These are all fine topics, but can be classified as mere pleasantries that much more appropriate in elevators, waiting in queues or just idling time away.

It’s not a discussion when one person is espousing information and the others are just listening (for instance, in a business meeting or seminar).

It is not a conversation when one person is being a good listener and allowing the other to talk freely and for as much as they want. That’s important, but for another time.

Powerful conversations occur when both speaker and listener enter a conversation as equals. They drop their shields, silence their judgmental inner voice, and allow themselves to become vulnerable. It is when we can discuss issues that include both heart-bursting joys and some hard painful truths. It is when in the end, the conversations prod us into self-reflection, which may lead to transformation.

The magic of conversations is that we are not only transmitting information, but something intangible. During a great conversation, it’s as if we are exchanging parts of ourselves that have been hidden away in the dark abyss of our subconscious minds.

A great conversation is when talking and listening are collapsed into one form—each person is on the same wavelength. It feels as though we have become one with the other party—if only for those few moments.

How do we have a powerful conversation?

Most of the time it’s a natural occurrence, but sometimes we can be armed and ready in several ways:

There’s no right or wrong place for a good conversation. Sometimes, it can happen in bedrooms, office corridors, or parking lots.

I was once on a plane from London to Berlin and I sat next to this elegant older woman. We struck up a conversation, which lasted for most of the three-hour flight.

I can’t remember much of what we said, but I remember we exchanged stories and experiences from the different worlds and ages we came from.

I can’t even remember her name, but I do recall her big inquisitive eyes and the warm hug we exchanged when we said our goodbyes.

2) Do plan for it with loved ones.

Sometimes if we are not careful, the vicissitudes of life and time pass us by and we find ourselves losing touch with our spouses, children, parents and friends.

I entered my teenage daughter’s room; she gave me a scowl, which I ignored and went to lie next to her in the bed. At first, she was dismissive and then the conversation warmed up. She told me of her recent trip to New York and what it meant to her. I told her about a similar experience I had almost 30 years ago.

We both took something as I saw a bit of her adventures in me and she understood it was okay to feel that way. I kissed her goodnight, and she had a look of contentment on her face, as did I.

3) Understand the value of silence.

There is a beauty and power in silence that we are too afraid to harness. This silence politely listens and encourages the other person to talk freely without interruptions, judgments or direction. It is often more useful than compliments as it doesn’t seek to glorify the speaker, allowing them to be as free as possible.

4) Avoid (being) these people or stick to small talk when they show up.

Their energy is negative, and they can never put you at ease, no matter what they do. They complain about anything and everything.

Those with a “win at all cost” mentality

These people don’t care if they are arguing with their 10-year-old son, their colleagues, or the person they love the most. They must always win the argument.

Everything is about them. If you say I was in Paris, they don’t ask how it was but quickly cut you off to say they went to Rome and go on talking about what they did and how great it was.

Those that are just too boring.

They talk about everything but their true feelings. They hide behind the most intricate and mundane details that make you lose focus and within a few minutes, you feel bored and restless.

These people only want to talk about what interests them. It could be football, politics or the economy. The conversation revolves about one topic and no matter how hard you try to switch it; they suck you back into their point of interest.

These are people who are dismissive, rude and are looking for ways to bring you down. The result is that talking with them kills your self-esteem and makes you wish you never started a conversation.

The best conversations are the ones which leaves our hearts stirring and empowers our minds towards introspection—they will get our intellectual wheels turning, and make us feel a deeper sense of purpose. The words exchanged will challenge us in such a way that we question some of the thoughts and beliefs that are holding us back.

It’s not about leaving the other with a feeling that we’ve impressed them or that we have pleased them; rather, it’s that each person leaves an indelible mark on each other’s hearts.