Is your Coconut Oil Cruelty-Free? 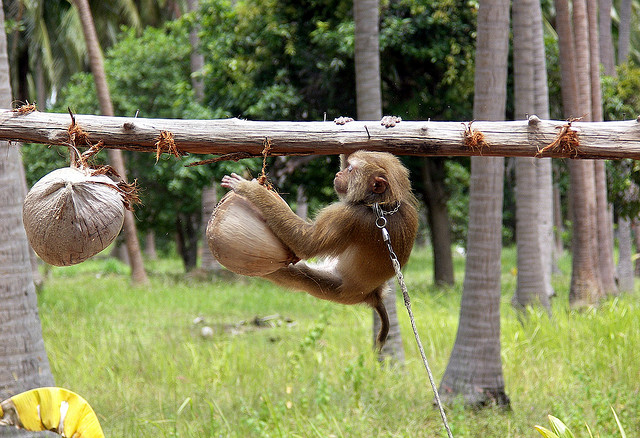 One of the most heart-wrenching aspects of being vegan is constantly finding out more details concerning the vast amount of animal-cruelty going on in the world in relation to the production of food, clothing, cosmetics and various other personal and household items.

Just when I think I’ve found a cruelty-free alternative to some product, information becomes available that shows that my choices have likely been quite the opposite.

While this can be extremely upsetting and disheartening, it does have a silver lining, as it means there is more awareness being raised about the inhumane and unethical practices that many industries use.

Not only can we then refrain from purchasing products that involve some sort of animal cruelty—and instead opt to buy from ethical, humane suppliers—but we can also take action to help implement much-needed change, such as alternative practices and laws protecting animals (which are currently non-existent in various countries in the world).

Eventually, industries will have no choice but to change when less people purchase goods because of the light that is shone on their practices, and it becomes unsustainable for those who implement cruel methods to continue to manufacture, produce and supply their goods.

I recently read an article about coconut oil and monkey abuse that horrified me. It hadn’t crossed my mind that the coconut oil I was purchasing could have been harvested using monkeys that are exploited, kept as slaves and forced to endure treacherous working and living conditions.

Much of the world’s coconut production is carried out throughout Southeast Asia, in Thailand, Malaysia, Sri Lanka and Indonesia. Indonesia alone accounts for 18 million tons of coconut oil every year.

Harvesting coconuts is difficult, dangerous and labor-intensive work. Monkeys are adept climbers and native in many regions in Southeast Asia—and they are capable of collecting up to 1,600 coconuts per day, compared to humans who can collect around 80. Therefore, monkeys are often trained, and then tied to a handler—with a metal collar placed around their neck—and forced to climb up to 80 feet and collect the coconuts.

Across Southeast Asia, monkey training facilities have been set up to teach monkeys, usually from when they are babies, how to harvest coconuts—and while they are there, they are often kept tied up and caged separately with no socialization.

During their training, the monkeys can choke on the wire they are hanging from, as well as being whipped and beaten if they do not obey their master.

Unfortunately, these training schools have also become an attraction for tourists who pay to watch the monkeys performing tasks that they have been forced to do. Click here (warning: disturbing images) to see how some monkeys are treated in one of these establishments. Once they have been trained, they are forced to work through fear while tied to a handler, and made to climb palm trees and swing from tree to tree at great heights to twist the coconuts to release them.

Once the coconuts have dropped, the monkeys then have to retrieve them from the thick brush, as well as collecting the handlers sharp tools and blades and packing them all onto a truck. Each coconut can weigh up to 2.5kg and there are often hundreds to collect.

When they are not working, they are kept chained up, often muzzled, without any socialization.

Many of the monkeys that are used have been stolen from their mothers at a young age, as they are easier for the handlers to train.

Marji Beach, Animal Place’s education director, explained, “What I find most distressing is that they take them from wild, keep them tethered and keep them that way their whole life. Monkeys should stay in the wild.”

Monkey exploitation for coconut harvest is believed to be widespread in Thailand, with Arjen Schroevers, who runs a monkey training school in Surat Thani, saying, “It would be difficult to find a coconut product made in Thailand that wasn’t picked by a monkey.”

In Thailand, coconut harvest time is between September and December and on the island Ko Samui, a popular tourist spot, it is believed that approximately 160 monkeys are involved in working long days.

With coconut oil increasing in popularity, this situation can only get worse for these socially-intelligent creatures forced into this harsh, unnatural, abusive existence where they will very likely suffer serious psychological harm.

It is difficult to get the exact number of how many monkeys are used overall in the industry—however, to try to avoid purchasing coconuts or oil that has been harvested by monkeys, here is a list of companies that have declared that no monkeys have been exploited or involved during production.