This is How the Left Lost Its Soul. 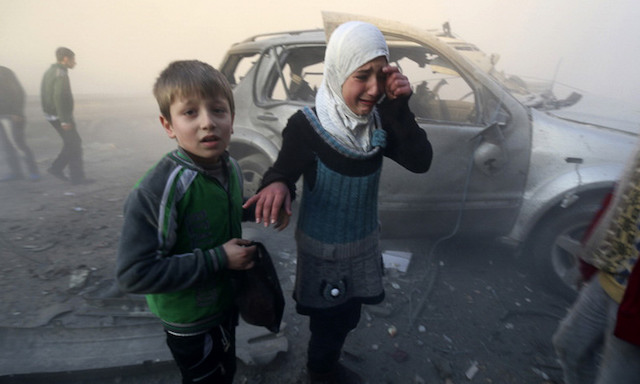 The Soviet flag whipped across my face, as the summer winds of St. Petersburg blew across the waters and a motley assemblage of Leftist demonstrators spoke of the dangers of protest in Putin’s New Russia. They pointed out that the police who were watching them would not budge when the skinheads came to beat them up, noting that those same skinheads had recently gone unprosecuted after killing one of their number the other night.

The group would have fit in well at any American anti-war protest, with their Greens and hippies, anarchists and Trotskyites, and not Stalinists—rest assured. There was a former Soviet political prisoner and the usual assemblage of poorly dressed, greying radicals. But unlike the American and European Left of today, there were no Putin supporters. For Putin was at that time starting to jail his rivals, assassinate his critics, close their papers, and make genuine freedom of speech all but impossible. And they knew their leader better, as a conservative nationalist, who had already engaged in massive war crimes.

It was 2007, and they were protesting the war in Chechnya. The demonstrators were putting their lives on the line, because Putin had not simply put down a rebellion in Chechnya but rather obliterated the Chechen capital of Grozny, which the UN would later describe as the most destroyed city on earth, in a carpet-bombing campaign of genocidal proportions, much like his current campaign in Aleppo. And unlike so much of the American Left today, the demonstrators took the lives of his victims seriously, and they recognized the imperial ambitions implicit in their leader’s actions.

Thus, it is more than a little ironic to see American and European peace activists vent their enthusiasm for Russia. Today, perhaps the greatest beneficiary of a decade-and-a-half long campaign to shut down the popular Russian press and suppress independent forums of political expression. American conspiracy theorists mouth their propaganda, as if RT News were some maverick non-profit, whose journalists put their lives on the line to get the truth out. And Leftist columnists, with no other venue through which to spew their nostrums, jump at the opportunity to host their programs.

Perhaps they sometimes wonder about the Russian journalists whose assassinations paved the way for those programs. There were several such assassinations in the early 2000s, and no doubt countless more journalists censored themselves as a result. But if these beneficiaries of Russian autocracy engage in such moral self-scrutiny, they give little indication, never noting aloud the irony that cries out from beneath their programs like some tell-tale heart.

And when the Green Party candidate for the American Presidency shows up on their screens and talks about peace, and is cheered for excoriating American leaders, while talking about working to restore the rule of Syria’s Assad regime, with the dictator Putin, who has shut down the last remaining democratic institutions of his own country, invaded and destabilized the two fledgling democracies of Georgia and Ukraine, and unleashed a level of firepower on Chechnya and Syria probably not inflicted by the United States on a civilian dominated city since WWII, one seems justified in asking whether the supporters of such a leader have not lost all moral credibility.

American Leftists would do well to talk occasionally with some of their Syrian counterparts. Admittedly, they are not easy to find, as they are being killed off at a rather rapid rate by the same regime their candidate for the presidency wants to help take control of their country. But Yassin Al-Haj Saleh, who has been dubbed “the conscience of the Syrian revolution,” has surrounded himself with a small coterie of intellectuals in Istanbul, and he speaks freely of the torture he endured under the regime.

It is more than a little uncomfortable to meet a man living in exile and ask if he is there with family, only for him to reply in query, you have not heard about my partner. Saleh was imprisoned by the Assad regime for 16 years, in a prison system to which the Bush administration would later outsource its torture, which according to Amnesty International has tortured to death at least 17,000 people in one prison alone in just the last five years. And he was imprisoned for simply being a member of a pro-democratic communist party. Hence, it was probably little surprise that shortly after the revolution broke out in Syria, the regime kidnapped his partner, from whom he has not heard since. Little surprise, but stunning nonetheless, and no doubt emotionally crippling.

He sits across from me with Karam Nachar, a Princeton trained Syrian academic, in a café just off Taksim Square, the site of Turkey’s own pro-democratic demonstrations, as they bitterly complain of the hypocrisy of the Western Left. Discussing a brief encounter with Noam Chomsky, Nachar expresses astonishment over his inability to recognize any imperialism other than that of America; at his inability to acknowledge the agency of Syrian dissidents, as if they were all pawns in some State Department game; at his antiquated conception of the world order. We are living in a multipolar world, notes Nachar, and Chomsky still behaves as if America were the sole superpower.

They are the refugees of a regime that put snipers on the rooftops, when protests broke out in 2011, and killed almost a thousand people, before regime defectors formed the first militias in self-protection. But as their friends and family are jailed and tortured, and as their home cities are pounded to dust, Saleh looks to the future. He notes that Syrians need to form an inclusive vision of democracy if they are to succeed against the regime. Nachar speaks of a democratic Syria of autonomous communities, a decentralized system of government to match their multiethnic and decentralized society. It is all reminiscent of precisely what the American Green Party advocated in the early nineties. But Green Party advocates are now backing the dictator instead.

Meanwhile, a young man in California, with shaggy hair and a Stein-for-President t-shirt, who fantasizes that he has just put his life on the line posting a photo of the Palestinian flag, gets 23 likes for his post on how the CIA started the protests in Syria, following his RT article on how the Obama administration is funding Isis. And he and his friends all agree that the mainstream media is censored, as they discuss leaked documents about places they have never thought about, written by administrators of whose titles they have never heard. And they all agree that Clinton is more dangerous than Trump and that 9-11 was an inside job. And they wonder what it will take for the world to wake up and take their ideas seriously.