5 Buddhist Quotes in Response to Anger. 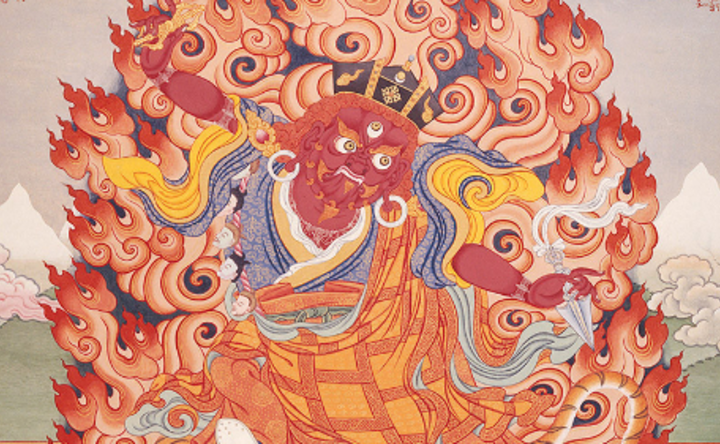 America is angry—which is exactly what got us President Donald Trump, in my opinion.

There’s so much anger, and collectively, we just don’t know what to do with it. We haven’t known what to do with it for some time now—resulting in our current situation. The thing about anger is we have to stop ignoring and repressing it. We must acknowledge it and talk about it in order to express and and move on from it.

When we spend our lives collectively repressing our anger and frustration because we are too worried about judgement, repercussion or offending someone, we end up here. A nation divided in hate, anger and fear.

We can simply feel what we feel and not identify with it—even those strong, negative, dense emotions like anger, jealousy, guilt or shame. We don’t even have to act on the emotion. That was a news flash to me at the ripe old age of 34:

Oh, I don’t have to act a fool and yell at anyone because I am angry? I don’t have to shut down, stomp away and treat you like you’re invisible because I feel rejected and that turns up as anger? I can just simply do nothing and it will pass? I can actually channel it for good?

Anger is neither bad or good when we separate it from our dualistic right and wrong mentality. Anger is nothing more than an energetic vibration. The problem arises from the belief that anger is “bad” therefore it should not be felt. This is so unhealthy for us. Anger can be wonderful catalyst for personal empowerment, change and motivation.

I say, if you’re angry, good! I’m angry too. But I’m not going to sit around allowing my anger to turn inward, making me small, bitter, fearful and hateful. Because that would be giving up my personal power and freedom to others. I’m not going to curl up in a ball defeated and crying, I’m going to stare my anger in the face and love it.

Because my anger is going to fuel a mission. I’m going to breathe into it and smile upon my anger like I would greet an old friend. The feelings don’t dominate me as they once did, nor do I fear them. I no longer have to act like a raving lunatic because I feel angry. Nor do I shut down and go into rogue self-destruction mode over it.

And most importantly, I don’t blame anyone else for my emotions. They’re mine. And I can shift them any time I see fit. Buddhism and meditation have taught me that by serving as an observer to my thoughts, mind and feelings, I can begin to see through the illusions I create because of them. And when I see through these illusions, I am no longer a puppet to my childish emotional reactions.

Instead, I can pause, and I can choose how I will respond rather than react to my emotions. Because responses get us way further than reactions ever will. Don’t get me wrong, it will always be easier to say, “F*ck you,” to someone who acts in a way I find unacceptable. But you know what? When I stop viewing the world form my expectations and self-centered point of views, I can stop for a moment and see that maybe, just maybe they don’t know any better.

Maybe they’re scared too and it’s manifesting as them being an a**hole. How do I know? When we find a place of humility we can start to consider this. I would much rather walk away from someone who is acting like a straight fool having greeted them with love, compassion and tolerance instead of judgement, anger and intolerance.

Because we never know when that kind word or action toward someone who seemingly isn’t acting in a way which warrants kindness, might just take root in their heart and start growing. And if it doesn’t, then at least I know that I didn’t contribute to the negativity. There’s a lot I don’t know, but I do know this: If we don’t find a way to start listening to one another in order to understand the other side, then we are doomed.

But we cannot listen to one another if we are blocked by anger. So with that I would like to share my favorite Buddhist quotes on anger. May they be of benefit:

That is exactly where our freedom begins—within our own mind. It can only begin there. And the only way to find freedom from our mental formations is through meditation. It is possible.

It is right here where we currently stand. We are on the verge of something. We are vulnerable and we are wide open. It is right here and now that we can choose to embrace it, thus embracing one another to learn, teach, unite and grow, or we can shut down in angry, resentful hostility. We each have a choice.

We must not give up our personal power. The angry suffering one needs love. The angry, suffering fool wants you to respond as he does. So rise above, and halt the dragon in its tracks. Only we have power over ourselves. Responding in anger hands our power over on a silver platter.

When we stop listening to the delusion of the ego we see the truth. Life is meant to challenge us, scare us, push us, and force us to grow and evolve. When we accept this truth, we find much less cause for anger and more peaceful acceptance.

I like to consider this: If I want to be understood, then I must first seek to understand others. I must bring to the party what it is I am seeking in the world. That’s where we will begin to bring change.

I will choose love today. Even for my enemies. I will seek to understand that which I do not.

Will you join me?