Remember how Trump’s fans think you can’t have a country without a wall around it? Get ready Canada! pic.twitter.com/zjlX5nPgXZ

America (and the global village that found ourselves trapped on the ride) did not just run an 18-month race to determine their future for the next four years. We endured it.

In the stunned wake of the strangest nail-biting finale I’ve ever seen, reaction flows.

Jubilation from the victors and shock and dismay from those who hoped for a different vision for America sounds about right for an election post-mortem…except it’s not.

I’m wanting to create new words for whatever is coursing through me right now—a toss-up between abject astonishment and determination to find something, anything positive to latch onto until we all can wrap our heads around what just happened.

As I write, Secretary Clinton has stepped up to speak, and I am even more astonished to realize that where I’m finding it is within both her response and President Elect Trump’s speech much earlier in the morning.

Waiting for Trump to speak, exhausted and deflated, I braced myself for a horrendously gloating acceptance speech. I can’t even express how grateful I am to say how wrong my expectations were. If I never say it again, I will this once: Kudos to you Mr. President Elect, for a civil and gracious acceptance speech.

Trump expressed, for the first time I can recall, an awareness of how important this moment was for the nation and the world. Was everyone else perched on their sofas, wondering what exactly he intended to stir up with his speech? Was my exhaled sigh of guarded relief shared around the world?

Trump’s air of victory as he addressed the nation was unexpectedly understated—his focus seeming to be more on assuring the nation he could and would represent his nation with more unity, compassion and dignity than we’d come to expect. I’ve not seen this demeanor from Trump before.

It was only a stay of what’s to come, we know this—but it was enough to send folks to bed, dampening any potential embers that might be wanting to ignite the bizarre, wounded energy election night had become.

Can he maintain that for the next four years? I’ll not stretch my hope that far today, but I can say that in the moment, this is what was most needed. A little balm massaged into the rawness—something calming to sooth the jaggedness of what had just occurred.

This morning, a second wave of acceptance had to roll through me. I imagine we’ll be on that ride for a while. But we are survivors, us humans, and to be not only a survivor, but a victor, it is crucial to seek the light no matter how dark things might seem.

So this morning, still bleary, I cradled my morning coffee with my T.V. on, avoiding social media like the plague, awaiting Secretary Clinton’s speech.

I don’t need to be a huge fan to feel deeply for her and her supporters. Regardless of her failings, she represented the last and only hope left between them and a sudden thrust backwards in the evolution of civil and human rights in their country.

I wondered how she would meet the challenge she set before Trump only days earlier to ensure national unity during the concession and transition of power. Did she have any hope or strength left to give all those responsible for crashing the Canadian Immigration website on election night? That’s not meant flippantly, this happened. Jokes and memes about Americans on the run flourish today—but people searching for a way out aren’t laughing. Americans don’t feel safe in their own country. I cannot swallow this concept whole, I’m still nibbling at it—it’s too surreal.

With the most admiration I have ever felt towards Mrs. Clinton, I listened to her graciously concede to a man who has debased her so many times in so many ways, I wanted to stand up and cheer for her.

This speech, to me, was the biggest victory of her campaign. The authenticity and genuine emotion I felt from her today was as real as I’ve ever seen her. (Rivaled closely by her impassioned response to Trump in the final debate on his stance on abortion.)

Not only did she rise up to the challenge she threw down to Trump, she showed him how it’s done.

With an emotional but firm tone, she reminded Americans that “Our democracy enshrines the peaceful exchange of power.”

That said, she did not hesitate to also remind everyone that the work is far from over:

“Never stop believing that fighting for what’s right is worth it.”

And to the women who saw in her their first good swing at the glass ceiling of leadership, Clinton spoke woman to woman—so much within her comment written between the lines, but visible to all:

“To all the women, and especially the young women who put their faith in this campaign and in me, nothing has made me prouder than to be your champion.”

I don’t believe I’ve personally seen Hillary choked up before—and for the first time, I felt her as a person, as a woman. I believe many watching this morning felt that too…and amazingly, also felt nourished with hope and continued determination. I thank her for that.

We might be upside down right now, but our responsibility is to survive and thrive. Today, we dig around in the ruins and find what brings us hope and determination—and nurture the hell out of whatever that is until it’s ready for the next round. Because this isn’t over. 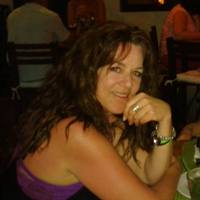