Dear President-Elect Trump, this Free Speech thing is Way Out of Control. 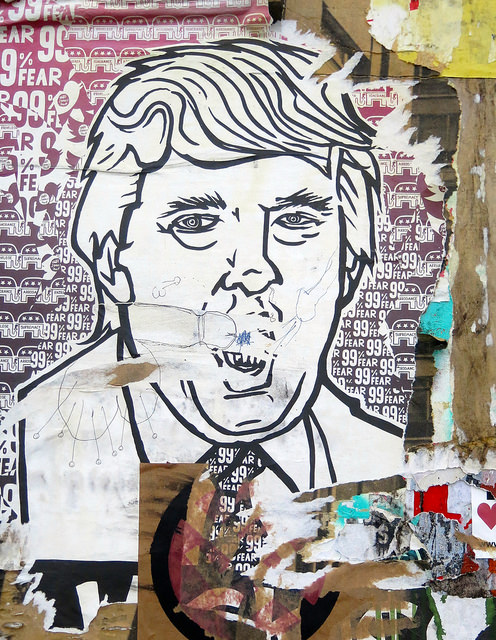 This country is full of people running their mouth lately, and I, for one, have had enough.

First it was the protesters. Then people started clogging my Twitter with petitions to get the electors to change their votes over to Hillary. And now they have the nerve to demand a recount in some states because of possible voter hacking. Seems they just cannot get over the fact that you guys  won the popular vote. Let’s not forget, three million illegals voted for Hillary. Them’s the facts.

All I ever hear about anymore is people’s “constitutional rights,” blah blah blah. What is this, the 60s?

Seriously, you can’t go anywhere without hearing how unbelievably damaging your administration will be to the personal freedom of Americans. Please. These left-wing nuts must think the world revolves around them and their escalated sense of entitlement. They have no regard for how their actions affect others.

They remind me of Rosa Parks. Tell me, what is so bad about the back of the bus?

If everyone just stuck to the plan, we would all be fine. This is harassment. I’m actually thinking about suing Saturday Night Live.

We need to put these people in their place. Where’s the screaming dude from the plane when we need him? What a winner. I say we give him a free lifetime membership to the NRA. And while we’re at it, let’s wave those pointless and time-consuming background checks. Guys like that should definitely be armed to the teeth—no questions asked.

Speaking of standing up for America, I was glad to see your tweet the other day regarding flag burning. Hey liberals, are you listening? Burn a flag, go to jail. Or lose your citizenship. Who cares if the Supreme Court already decided in 1990 that laws against desecrating the American flag are unconstitutional? That’s the great thing about you, Mr. Trump. You don’t give a rat’s ass about the historical significance of this decision. Or what our soldiers died for. Everybody knows the First Amendment is a crappy idea. That’s why it’s incredibly reassuring to see you threatening to punish everyone when you come into power, regardless of the law or the opinions of fools like former Associate Justice of the Supreme Court William J. Brennan, Jr.

“We do not consecrate the flag by punishing its desecration,” he said. “For in doing so, we dilute the freedom this cherished emblem represents.”

Whatever. Your thing sounds better.

And forget what Benjamin Franklin said, too:

“Whoever would overthrow the liberty of a nation must begin by subduing the freeness of speech.”

What a hack. Let’s listen to Rudy Giuliani instead:

“Freedom is about authority.”

Now there’s a guy who knows what he’s talking about. Good thing he might be Secretary of State.

And if you want stricter libel laws so you can punish journalists for the incredible unfairness they have shown you, who can blame you? You can’t fight ISIS if everyone is going to go around hurting your feelings.

Mr. Trump, what we need now are strong leaders like yourself. Someone has to protect us. We can’t just let people do and say whatever they want when you don’t agree with them. Other countries might just have the right idea.

Take Iran. In 2004, journalist/blogger Roozbeh Mirebrahimi was arrested thanks to frequent reporting of stories perceived as critical of the regime in what’s known as “The Blogger Case.” Among them was the story of Zahra Kazemi, a Canadian journalist of Iranian descent who tried to photograph a controversial Iranian prison. She died in prison of a fatal head wound after being detained and reportedly raped. Mirebrahimi was placed in solitary confinement for 60 days for his opinions, where he was subjected to severe physical and mental torture and then forced to write a letter of repentance.

And China. Free speech is a privilege in China, not a right. The only people in China who can publish criticisms or opinions contrary to those of the Communist Party are the senior members of the Communist Party themselves. The internet is monitored by the government. They actually record people’s keystrokes, making it impossible to fly under the radar or send private messages. If you’re caught violating the laws of Chinese censorship, you go to jail. Censorship rules!

In 2012, a 21-year-old woman was arrested in Mumbai, India, for complaining on Facebook that the funeral for politician Bal K. Thackeray had shut down part of the city. Her friend was also arrested for “liking” the first woman’s post. The grounds for the arrests were “deliberate and malicious acts intended to outrage religious feelings.” Well, that’s what they get.

In North Korea, if you dare to say anything vaguely critical about Kim Jong-un or the way the government is run, it’s enough to make you and your family “disappear” or end up in a political prison camp where you will most likely die of famine. If they don’t just execute you, that is.

In Saudi Arabia, they can press terrorism charges against anyone who demands reform, exposes corruption or otherwise engages in dissent. And under Islamic Penal Code, political dissent is punishable by hanging, shooting, stoning or “falling from a height.” They call it “Death by Rebellion.” Why can’t we pass laws like that here? That would certainly shut everybody up. Except probably Ann Coulter. But she’s on our side, so she’s okay.

As a person who has made it all the way to the White House with no law degree and zero military experience, it’s up to you, Mr. Trump, to interpret the Constitution as you see fit to defend our lives and our fragile minds. I know you will keep a sharp eye on things when it comes to this free speech crap.

“Through clever and constant application of propaganda, people can be made to see paradise as hell, and also the other way round, to consider the most wretched sort of life as paradise.”

I know you know what you’re doing. You’re not in over your head. Only you alone can fix it.