It felt like that oddly pleasurable, tingly sensation you get on the soles of your feet when you hold them a little too close to the fire; it flowed from the crown of my head to the tips of my toes. Each and every muscle pulsated, and the vibrations rippled through my bones and ligaments. I pulled my knees towards my chest and smiled, as a lay on my side in the fetal position—fully present, full of life.

Last week I tried something that had long been on my list: I took my first yoga class.

There’s something exhilarating about the unknown; trying new things and venturing down new avenues. I didn’t really know what to expect, and I think sometimes that’s best.

I made a point of doing minimal research, other than a brief online search of Hatha and Vinyasa yoga (the focus of the class) and an image search of Downward-Facing Dog.

I tentatively scanned the room as Ray—the friendly, and it must be said, extremely handsome, instructor—introduced me to the four composed women who were sitting on their mats, stretching and readying themselves.

I tend to zone out in awkward social situations, so their names went in one ear and out the other. I had more pressing matters on my mind, like trying to decide which part of the room would be the most inconspicuous.

As I approached each mat, my clumsy hellos and flimsy handshakes were returned with sympathetic smiles and the same concerned glance—lamb to the slaughter. I hurriedly set up base camp on a mat in the back left corner of the room, which I had adjudged to be situated the furthest from the front, and therefore most out of view.

Shortly after, the remainder of the class poured in. Five more females. Oh, terrific.

Light stretching continued, so I started to throw some shapes myself.

Before we began, Ray kindly suggested that I take off my socks, as it would offer more “traction on the mat.” It was only then that I realized everyone was barefoot.

It had been well over a decade since I’d heard the word traction used in a sentence, while listening to the great Murray Walker, the legendary Formula 1 commentator. I began to wonder why a yoga instructor was using the word traction—it was a little unsettling.

I started to feel slightly apprehensive due to the unattractive nature of my feet; they had been through battle thanks to a pair of one-size-too-small football boots that I had been wearing for the past two rugby seasons. I was down to seven toenails and my feet were pretty banged up. But I apologized to Ray for my oversight, and whipped off my ankle socks anyway.

Oblivious to any and all yoga terminology, I just smiled and nodded as Ray explained what we would be doing during the class.

Lamb to the slaughter.

With style and grace, he effortlessly flowed into an advanced position, which he confidently assured us we would be working toward. I can only describe it as The Inverted Upside-Down, Half-Eaten Pretzel pose.

I had to stop myself from applauding, and instead just shook my head in admiration, while continuing to stretch on my mat—proud of myself for being able to graze my toes with my fingertips.

With little to no foreplay, we got straight into it.

Downward-Facing Dog turned out to be a base pose of sorts. We found ourselves reverting back to it, almost like a resting point, but without the rest. I was grateful for the online image search I had conducted earlier.

As the class flowed, I was actually surprising myself with what I was able to do. I think because of my background in team sports, my competitive side emerged, and I was determined to hold every position. In my blind determination however, I lost sight of the importance of breathing and being present. I was so engrossed in the act of balancing on one leg, while holding my other outstretched leg in front of my face, that Ray’s calm and clear instructions to inhale deeply and exhale purposefully were going unnoticed. I was just trying to think of something else to block out the pain and discomfort.

The other students may have been well-versed in the art of multi-tasking, but not me, buddy. No time for breathing patterns when you are lunging forward with one arm tucked between your legs, clutching desperately at your other arm, which is wrapped around your neck and wedged between your shoulder blades, all the while, your hamstrings feel like they could tear off the bone at any moment.

I found myself jumping back and forth between a state of painful concentration, and bizarre euphoria. I was laughing both at myself, and at the craziness of the whole situation I had found myself in. And it was becoming pretty enjoyable.

The sweat was beginning to drip by the half hour mark, and I soon became aware of the importance of “traction” between the mat and my velociraptor toes. One awkward slip would be more than enough, with the pressure I was under while deep in the stretch, for my hamstring, calf, hip-flexor, groin, and quadricep muscles all to be ripped to shreds.

As the end approached, the lights were turned off in the room. We were instructed to lie flat on our backs, with palms facing the sky, and close our eyes. It was time for the meditation portion of the class—which I didn’t know the name of at the time, but after another online search, I found out is known as Corpse Pose.

Lying there in that darkened room, while taking the form of a lifeless body, I was overcome with happiness, and thoughts of pure love. I felt invigorated.

As we curled into the fetal position and turned on our sides, I wouldn’t go as far as to say that I felt reborn, but I was definitely aware in that moment; grateful for all that I had in my life, and for simply being.

Overall it was an incredible experience, and the leap into the unknown proved beneficial, as it so often does. I’m excited to go to my next class, to continue along the path of inner growth, and to hopefully become more in tune with my body, and my mind. 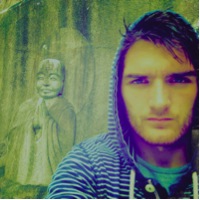