The Best Slow-Cooker Cream of Mushroom Soup Ever! {Vegan Recipe} 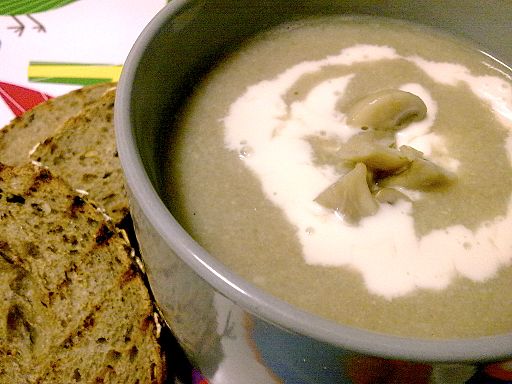 When I arrived at the monastery, a friendly nun wearing a long, black habit answered the door and showed me up three flights of stairs to a narrow room with dormer windows all around.

On the small feather bed were sparkling white sheets with hand-embroidered edges.

Only in a convent in Europe would I expect to find such delicacies as sheets with hand embroidered edges.

The windows of my room overlooked a neatly trimmed courtyard that was surrounded on all sides by the other wings of the compound. A tiny figure carefully stepping across the third floor tiled roof caught my eye.

Is that a nun on the roof?

It was a nun. She was wearing a long, black costume something like the nun who had welcomed me at the front door. I stood, mesmerized as she gathered up her skirt and made her way down the impossibly wobbly ladder with some kind of tool swinging from her belt.

Welcome to my three-week contemplative prayer retreat in Germany.

It was 1991. I had arrived from Tucson a few days early in order to rest and recuperate from the flight. As far as I was concerned, however, it had begun then—at that moment—with the three flights of stairs, the embroidered sheets, the enclosed courtyard and the nun climbing down a wobbly ladder from the roof.

Little did I know that this retreat would go on to end magically.

“Whenever you go on one of those meditation retreats,” my friend had said to me once, “You always come back looking like you’ve been very far away.”

She was right. Meditation did lead me far away, but it had nothing to do with how many miles I had traveled. Instead, it had to do with how far into the silence inside myself I had gone.

By the end of this particular three weeks of meditation, I hadn’t seen myself in a mirror, spoken out loud, written (or read) a word, and I heard mostly German being spoken.

It’s not like it was uncomfortable though. It wasn’t. It was a loving environment in which the nuns watched over the participants with kindness and a sort of reverence.

Interesting how all that silence and clearing of the mind affected the food. I have never had a better tasting bowl of gruel in my life. Not to mention the bread and homemade goat cheese served with boiled vegetables and potatoes for lunch.

But then there were the soups…

My favorite was mushroom, with its earthy fragrance, pungent herbs and silky texture.

Before I left for home, a few days after my retreat was over, the nuns invited me to go into the forest with them on a mushroom hunt.

It was actually raining lightly, but that didn’t stop anybody. The nuns gave me a yellow slicker, like the ones they were wearing over their veils and long skirts, and outside we trod looking like a covey of pointy plastic tents moving along the trails.

“There! There!” One of them exclaimed after about 30 minutes. It was when I moved ahead and caught up to what she was pointing at that I saw a scene so sweet and so perfect, I almost didn’t believe it was real.

Sitting at a crude table with benches, in a clearing deep in the forest, were four or so other nuns. The trees formed a leafy umbrella thick enough that not even the rain could douse the cooking fire they had built. Candles were lit all round and one of the nuns was quietly strumming a guitar.

“Come,” my English speaking nun/guide said, gesturing for me to sit near the fire. “Now is the best time.”

I sat down, waiting to see whatever it was that made it the best time—and lo and behold, I soon found out.

Into my hands, one of the nuns placed a huge bowl of musky, earthy soup made from the very mushrooms they had picked earlier.

There we sat, the half-dozen or so nuns and I, surrounded by the quiet rain, the dripping trees and verdant loam, the candles and the strumming of the guitar while we all drank bowlfuls of hot soup made from freshly picked mushrooms.

I’ve never forgotten that moment. It was a perfect ending to my retreat—in fact, it was magic.

While this recipe does take two days to make—it’s basically two days in which you do nothing other than throw everything into a crock pot and let it cook. You don’t have to do a lot of chopping, and you don’t even have to be home. It’s a very low maintenance recipe and the long cooking times are worth it—it makes the most flavorful and creamiest “no cream” mushroom soup ever!

Put all ingredients in a crock pot and cover with water, cooking on low overnight or longer depending your schedule. Not only do you not have to worry about overcooking it (I have cooked it on low for as much as 16 hours), these are also approximate amounts—just basically use what you have of these ingredients in your refrigerator.

Cut the stems from the mushrooms, and set the leftover whole mushrooms aside. Put the mushroom stems, the cauliflower, cashews, onion powder, mustard and salt and pepper into the vegetable broth from the previous night and cook on low until it all turns mushy, about another 4-6 hours (or as long as you need, you don’t have to worry about over cooking it).

Remove lid from crock pot, and let the soup cool.

Blend the cauliflower mixture in batches in a Bullet or other high speed blender, pouring the blended soup into a saucepan as you go. (Note, a food processor does not work for this, as it does not have adequate power to completely break down the cashews).

Slice the remaining whole mushrooms, and add them to the blended soup in the sauce pan.

Cook the entire mixture on top of the stove, on medium, until the mushrooms are of the desired tenderness.

Ladle into large soup bowls and sprinkle with dried dill weed for a garnish.

Serves 4-6 (depending on the size of your crock pot).