Why I Voted for Trump.

Fear did not motivate me to vote for Donald Trump.

I voted for Trump because I was sick of war in Libya, Iraq and Afghanistan.

I voted against CIA coups in the Ukraine.

I voted for Trump, because the communities of people in Michigan and Detroit need hospitals before they are built in Mosul.

I voted for the guy who broke the hold of Bush Republicans, and the Left Gatekeepers—aside from Bernie Sanders—was the best anti-establishment candidate money couldn’t buy.

I voted for the guy who the day after the election had protesters on the streets in multiple cities. Public protest is a hallmark of a functioning democracy and I completely support the right of any person or group to do so non violently, whether I agree or not.

I voted for Trump because breaking the laws of political correctness and being a lout is less of a deal-breaker for me then someone who votes for war and sanctions that maim and kill literal men and women and children.

I voted for Donald Trump from a place of love, not fear. As did Muslims, atheists and millions of women and blacks and the LGBTQ community.

So it’s okay to be joyful and celebrate the fact that America has taken a massive emotional and spiritual leap forward. And it’s okay if others don’t like it. Be they well-known yoga teachers, friends, family or authors of books on mindfulness and loving kindness who use their social media platform to rail against what they see as sexism and division and the hard churn of samsara. How many spiritual stories are filled with tales of the adept on the road to enlightenment encountering a hag or a drunk, brashly writing them off, only to discover the skillful master was in disguise?

Challenge your mental yoga with the same interest and perseverance as you do your physical practice.

The other side of the 2016 election are spiritual beings just like you. And so are people who didn’t vote.

Don’t gloat or engage in bad form when being unfriended or given the cold shoulder. I’ve heard some doozy ad hominums thrown my way in the last week. Keep it civil and thank these people for giving you the opportunity to practice self-control.

Forget Hillary or Donald’s character. This is about our characters

Recently, I got an email from a local yoga center holding a sitting for people who needed support and have their voices heard in the wake of an outcome they didn’t expect.

The location took an hour train ride from my apartment. It was cold and it was my day off. I went in the spirit of the very unity and healing they needed and asked for people to join. I came really close to blowing the opportunity off and listening to that voice that says “stay at home and relax.” You know the one. That same voice that tries to stop you from doing an asana class, but you drag yourself there and always, without fail, feel glad you went. So I went.

Forty people gathered, snacks laid out, kids running around. Guitars were passed. Leonard Cohen’s book of collected songs and poems were passed as verses of Hallelujah were sung.

I applauded when the guitarist got up to cover Ingrid Michelson and smiled when I watched a little girl chomp on wasa crisps and stare in awe at the brave singer.

I listened to a woman explain how her sister’s son came home and asked “Are they going to rip our family apart?”

One woman said she just wants to know what to “do next.” Send money? Send emails?

I asked her what her goals were. I tried to make her laugh and cheer her up and it worked more often then not. But I had empathy and sympathy and it was okay when it was quiet and there was no laughing. She didn’t have an answer but It wasn’t about answers, it was about—God forgive me for using this cliché—holding space. Far from being cliché, it was healing for both of us.

I met many people. Happy to be together, sad at the circumstances, no idea that the “enemy” was in their midst.

I had no intention of lecturing or antagonism or brinksmanship. I didn’t go looking to argue. They put a call out for healing and support and I answered the call. I came to be a friend and advocate for healing. And I came as a Trump voter.

I’m not finished with my outreach to passive and active anti-Trump protesters who think I’ve turned to the dark side, and I hope neither are you. Wherever you sit on this and work in your own lives and communities, please consider face-to-face dialogue over social media flame wars, sh*t posting and unfriending family, and colleges and sangha members. It may feel good in the short term but will set back your spiritual evolution.

The Best Advice ever from the Dalai Lama about Trump.

There is one good thing about a President Trump.

Fight or Flight: Why Trump Inspires me. 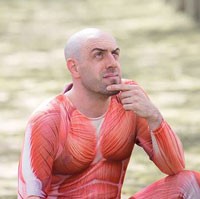