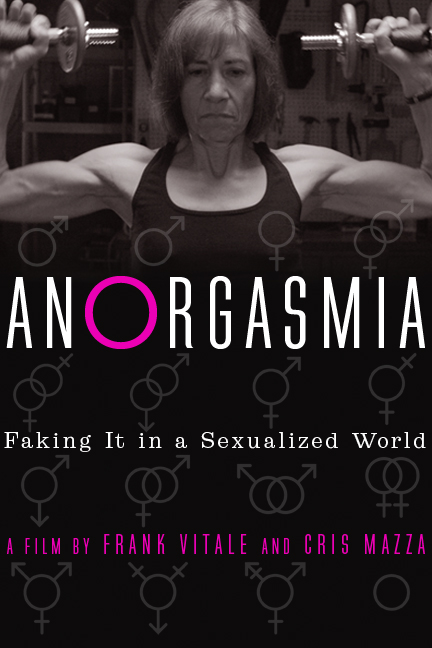 “I am a person who didn’t want to be sexualized, didn’t want to have sex, and didn’t want any of the things that led up to it. How can I explain that? What happened that caused it? I’ve made a million guesses.
The parts that cause me the most revulsion are my sexual parts. My gendered parts. Wanting to be a boy was a way to avoid that.” ~ Cris Mazza, Anorgasmia

Imagine spending your life unable to enjoy or even desire sex. Cris Mazza, 60-year-old author and professor of writing, has experienced just that. Along with a lifelong disinterest in sex and sexuality, Cris also has a severe dislike of her female body. As a result, she exercises (weight-lifting) excessively in order to maintain a more masculine (muscled) form. Currently, she is in a long-term, co-habitational, and sexual relationship with Mark Rasmussen, a jazz musician whom she met and dated in high school. They are deeply devoted to one another.

To date, Cris has considered herself androgynous. However, this label she placed on herself is no longer satisfying to her. Cris is trying to make sense of her aversion to sex, her inability to have ever experienced orgasm, and her place in the spectrum of gender identity.

To help her accomplish this gargantuan task, she teamed up with filmmaker Frank Vitale to create a film based on her life: Anorgasmia. The pair hopes this “docufiction” film (a term coined to cover the film’s fictionalized memoir style) will shed light on these intimate issues—and perhaps help others who are experiencing the same situation.

For most of us, gender is something we take for granted. We learn within the fist two years of life that we are a boy or a girl and what the differences are. Most of us accept this information and proceed with life accordingly, perfectly comfortable with the body we’re in. But for .002 percent to .003 percent of us, this is not the case.

For those individuals, the body they were born into seems alien, even disgusting. The Diagnostic and Statistical Manual of Mental Disorders, Fifth Edition (DSM-5) indicates that this gender distress is defined as Gender Identity Disorder, or GID. Further, this detachment from one’s gender plays a part in the disruption of sexual pleasure patterns. Anorgasmia, the inability to reach climax during sexual activity with a partner or alone, is a typical result. More women than men (4.7 percent) experience anorgasmia.

Cris has been aware of her sexual aversion and antipathy to her female body since childhood. She was able to assimilate to this way of living by dressing androgynously, yet she does not identify as lesbian (“I don’t even like my body, so how am I going to like another woman’s body?”). Androgynous people always appealed to Cris due to what she viewed as “confidence of who they were and what they were.” 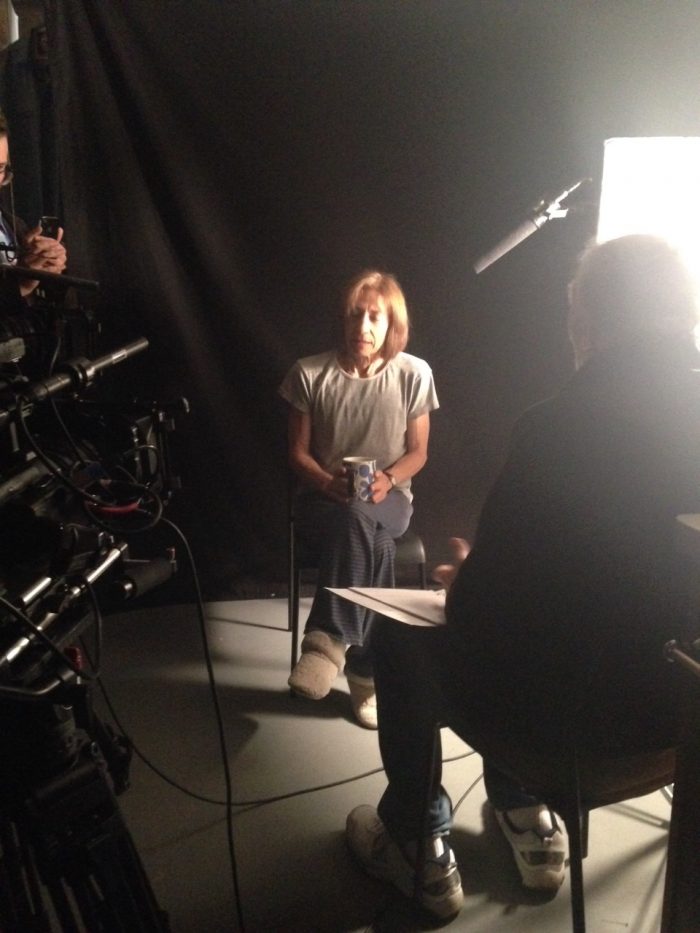 Cris on the set of Anorgasmia

As many who live with GID do, Cris believed that sex was something she had to do in order to be like everyone else and fit in with society. She had her first sexual experience in college. “All I felt physically was a feeling of accomplishment. I did it…I succeeded. It wasn’t like any kind of ecstasy…or love or any of those things you think you’re going to feel. In fact, Cris’s experience was quite physically painful. She recalls that, “it felt like his penis was studded with razor blades.”

When she met her current partner, Mark, he kissed her on the forehead during their first date, which made her feel safe. She hoped their relationship would continue that way. Rather, he wanted their relationship to progress toward a sexual one. Cris recalls that although she didn’t like the idea of having sex (even with this young man she truly cared for), she thought to herself, “you’re supposed to like this…something is wrong with you if you don’t like this,” and allowed Mark to continue his physical pursuits with her.

During the course of the film, Cris undertakes a project to document the body she dislikes so vehemently by isolating its elements in self-portraits. Later, she endeavors to transform herself into a man to see if others might see her not necessarily as a man, but rather as “not female.” In fact, this desire is not uncommon for those who live with GID. There is a desire to make congruent what one feels on the inside and how one looks on the outside. Cris’s artistic project is one of many creative ways people with GID can make sense of their life experiences. But it doesn’t always mean that our friends and family will accept our self-investigation. In Anorgasmia, Cris’s project causes increasing distress in her partner Mark, of which she is aware, but is determined to continue, even at the risk of damaging the relationship that means so much to her. It’s as though she’s given herself an odd ultimatum: It’s either him or me.

“Something Wrong With Her” 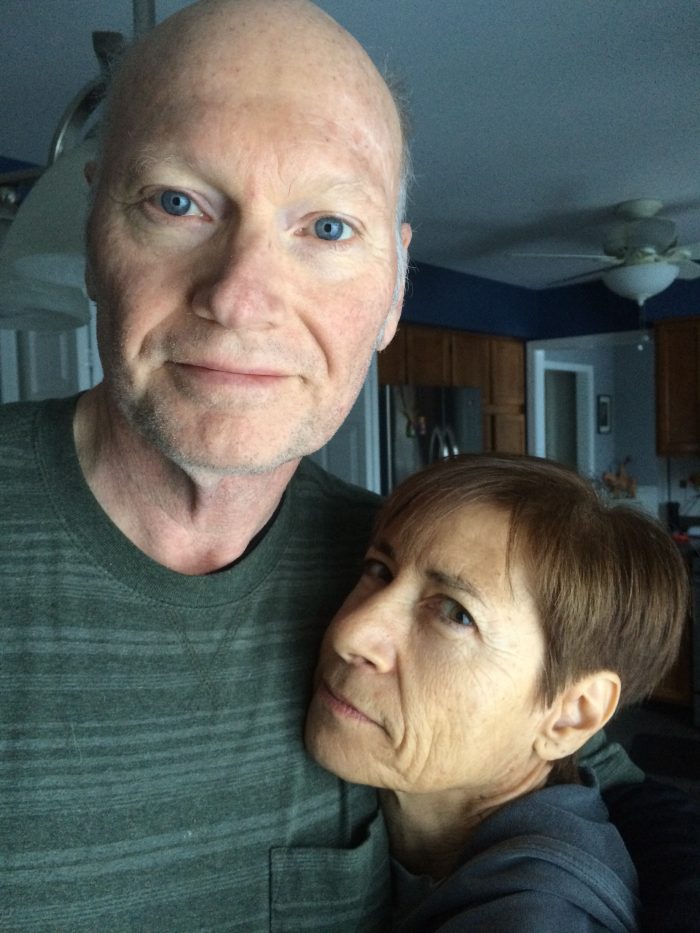 Mark and Cris remain deeply devoted to each other as Cris investigates her gender identity.

At this point, it’s natural for us to want to ask the “why” of Gender Identity Disorder. In fact, Cris herself states she’s “made a million guesses” as to the origins of her feelings. Indeed, Anorgasmia offers little in the way of any clues as to the etiology of Cris’s condition, but that is not the film’s purpose.

Her memoir, Something Wrong With Her, however, gives some insight into the possible early stirrings of her discomfort with her body and its acceptance as a sexual entity:

“Books suggest it starts further back than memory can access, common occurrences for some reason meaning more to some of us than others: the time when mother takes her child’s hands away from genitals; and then again during toilet training, when many girls learn how dirty she is ‘down there.’ Some of us seem to learn the lesson more resolutely than others. So I never ‘cheated’ on this ‘bargain’ with mother. Never even looked, never wanted to look, ignored the whole thing…and wished I was a boy.”

This early imprinting of aversion to female genitals may have made more of an impact on Cris than even she realized at the time. Her acknowledgment that they “mean[t] more to some of us than others” and that “some of us seem to learn the lesson more resolutely than others” implies that she is part of this subset of people who took these lessons deeply to heart.

Cris Mazza’s is a unique situation. She is aware of and even outwardly accepting of her lack of sexual desire. She does not identify as asexual; this is a classification she entertained for some time but has since rejected. At the same time, her intimate relationship with Mark is of great importance to her. To that end, it would seem that her desire to be at peace with herself has much to do with keeping Mark happy. Certainly, those with GID and anorgasmia face similar conflicts in their relationships. The overriding question in Anorgasmia is whether it is possible for Cris to find peace in her relationship while honoring the self she identifies with. Even deeper lies the vital question: Who is that self, anyway?

Typically, the best of action for Cris and others who experience Gender Identity Disorder and its accompanying impact on one’s lifestyle is psychotherapy with a (diversity-trained mental health professional). Equally important is to find a community of peers and supporters who will champion our path toward congruency and wholeness.

Anorgasmia is currently making the festival circuit and will be released fall 2017.

As always, mindful community feedback is welcomed. Please share your thoughts and stories in the comments section below.