One Way we can Stop the Genocide in Aleppo. 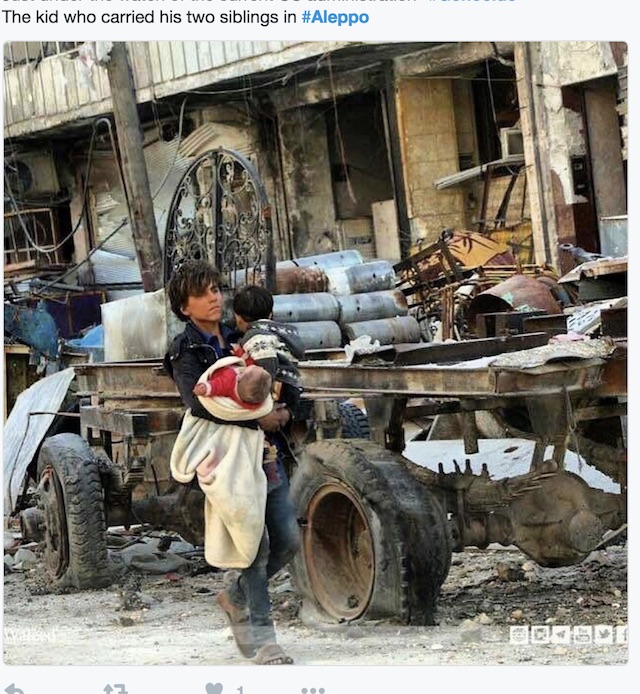 Over the course of the 20th and 21st centuries, numerous groups committed genocide and almost every single one of them sought to cover it up.

The Germans hid their concentration camps, Hutu genocidaires graciously pretended nothing was happening when confronted by the press.

Not only did the leaders committing genocide hide their actions, they usually pulled back when their genocidal intent became evident. Nazi SS officials stationed in Denmark, where the population and leadership actively resisted the deportation of Jews, were even converted and would not carry out orders to deport Jews late in the war.

It is hard to kill off mass numbers of civilians. It takes countless bombs and bullets and ironclad discipline. Someone has to bury the bodies, and real human beings must live with the brutality of their actions.

All of this must be going through the minds of Assad officials and Iranian militias as they contemplate killing off the remainder of civilians in Aleppo.

Though they have bombed them into oblivion, though they have thrown at them every kind of weapon except for nuclear, though they disappeared tens of thousands and tortured them to death in prison, the Assad regime and its allied militias now face a level of mass murder that must leave many of them shaking and stunned.

They will be looking for a way out—because mass murder is hard work—and we can help give it to them.

The civilians of Aleppo are now being bussed out of the city, but it is an on-again off-again ceasefire deal, complicated by the wishes and intents of countless militia groups on each side. It is difficult to say whether it will hold and what its status will be by the time you read this article.

To complicate the matter further, civilians are being bussed to areas under heavy fighting. Turkey is supposed to take them in, but negotiations at this stage are complex and could easily turn in many directions. What’s more, nothing has been done to assure the safety of civilians in the last rebel holdouts in Syria.

If we do not act now, things will only get worse and may deteriorate to unimaginable proportions when Trump enters office.

If you want to stop genocide, you must cry bloody murder to anyone who will listen.

The propaganda from Assad and Putin supporters and their paid trolls, along with conspiracy theorists and self-proclaimed reporters with no credibility, is now relentless. If you want to save Syrian lives, you too must be relentless. Write your prime minister or president, your congressional representative or parliamentarian. If you are a writer, step off social media for a day and write an article or letter to the editor. If you can reason, get on social media and debate. If you are intimidated, like comments and share articles and posts.

This may not seem like much, and it may lack focus, but we are all standing in the court of world opinion and everyone is debating. The battle for our humanity is taking place on each Facebook page and every news site, in every nation and state.

You are staring in the face of mass murder on an epic scale. It has slowed for a moment only due to the vigilance of the media spotlight. Now is the time to press forward and save the remaining Syrians in areas still controlled by rebel fighters. We will all differ on what should be done there, but we can press for their safe passage into exile.

Make no mistake, what we are celebrating is ethnic cleansing, the deliberate displacement of massive populations on the part of a regime—but it is a step up from genocide.

To keep yourself informed, you can follow some of the top writers and social media activists on Facebook, like Robin Yassin Kassab, Rami Jarrah, Charles Lister, Kenan Rahmini, and Iyad El-Baghdadi. These are some of the people closest to the action. For best depth analysis, check out anything from the Guardian UK or my own background analysis, What Everyone Talking About Syria Should Know.

If we succeed, we send a message to fascists everywhere that there are limits in warfare, and in so doing we may restore to our world a small portion of its lost humanity.