Walls Don’t Last: What we need to Move Forward. 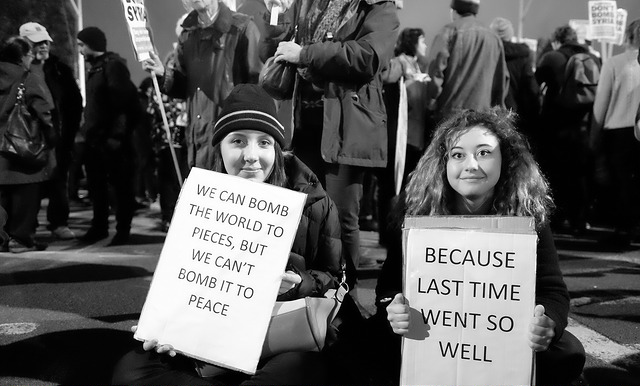 For generations, many of us have been dreaming of a peaceful and inclusive world.

Not necessarily a world where we are all the same, but one where there is space for, and appreciation of, our differences, while still acknowledging our fundamental common humanity. The gift we now have, through technology and travel, is an unequivocal perspective of the world as a global village.

Dreaming isn’t always easy, though. As long as the external world plays ball with our visions—or, at least, so long as it doesn’t interfere too much—dreamers can maintain hope. The challenge is to keep dreaming when there are villagers within our community who would continue to separate east from west, one side of the tracks from the other, in order to protect themselves.

As a parent, one of the “lessons” I’ve had to learn is to allow my kids room to grow and explore for themselves—including the freedom to trip and fall while being there to help them get back on their feet again when they are ready, and to maintain hope that they will move forward to the next stage in their maturation process.

In some ways, I see the world at the moment in a similar way. We are growing up but not yet fully grown—if, indeed, there is ever such a thing as “fully grown.” And we are alternately springing forward in terms of growth and then stumbling, skinning our knees and even breaking limbs, such is the scale of our stumbles at times.

Can we keep patching things up?

I would love to be in a position to compare our progress to that of a teenager who is becoming an adult, but I think it more resembles the changes of early childhood. We want to expand our horizons and play with the kids next door, but that means also letting them play in our home and with our toys. We soon learn that each home has its own values and set of rules, and not all interactions are easy or peaceful.

Ultimately, most kids have no choice but to find a way of getting on with each other—they’re usually encouraged to normalise to a point where they can live together according to particular codes of conduct that vary according to the society in which they are growing up.

And, ultimately, humans are heading in the same direction.

We have no real choice except to figure out how to get on or self-destruct, given that we can no longer turn back the clock and “unsee” the fact that we are all citizens of one small planet. But we have to find a way of getting on that doesn’t mean we water down our differences to the point of extinguishing them.

For some, this means everyone should stay on their own bit of land—where they were born, and where their parents and grandparents lived—the result being tight border controls, restrictive immigration (and, perhaps, emigration) policies, and racism.

But if that is the best way of resolving differences, where and when do we draw the lines?

Humans have been pushing boundaries since the dawn of time and history has shown time and again that borders and walls don’t restrict the movement of our species for long. Of all the famous walls—historic city walls, the Peace Wall in Belfast, the Berlin Wall, Hadrian’s Wall, the Great Wall of China—how many are anything other than a tourist attraction now?

Walls don’t last for long, from a multi-generational perspective. Similarly, humans will eventually push against any form of border or limit, whether political or social. We’re expansive beings who long for freedom and adventure, scared though we might also be.

And what if we adopt the other extreme, opening up all borders? Refugee crises and mass movements of people (both peaceful and not) have shown that simply dropping borders without adequate preparation causes its own difficulties. Cultures, values and languages are over-powered by more dominant ones, lifestyles destroyed, local resources over-burdened and economies unbalanced.

If we are aiming for an inclusive world, surely it is not at the cost of the planet becoming anglicised, homogenised and controlled by mass media?

No-one at the moment appears to have the solution to how we balance the two opposite urges—the need to explore and the need for security—and it is only at times of urgency that we, quite humanly, get around to putting sufficient energy into finding answers. The crisis in Syria and the recent political shifts in the U.K. and the U.S. are adding that required degree of urgency, and are highlighting the flaws in our western democratic systems and the disenfranchisement of large swathes of society.

Given the lack of solutions, I believe a shift in perspective is required, including an expansion of our current paradigms of government.

Is “majority rule” really the answer or does the germ of a better idea lie in working toward consensus, as Native Americans frequently did? What about the two party system in the U.S.—how does that compare with proportional representation in Ireland or the Swiss model, where citizens also take part in “popular” votes several times a year? And if western societies don’t provide the best way forward, what can other, perhaps less developed, societies offer? How much attention have we given to societal, and even tribal, structures in Africa and Asia?

As a general rule, dreamers—of which I am one—are big on visioning and not so strong on doing, while doers are excellent at making things happen but not so strong on broader perspectives. Those who can do both are a rare breed. And yet it is both of these that we need in order to move forward.

Even without big gestures or actions, there is still much we can do.

At an individual level, we can foster the attributes that encourage the maturing process: spending more of our time in discovery, exploration and imagination than in winding ourselves up in tight coils of negativity and despair, fed by constant discouraging media stories.

In discovering other lifestyles and perspectives, we sow the seeds of new solutions that have yet to appear. And as parents and mentors, we can offer support to those in our care for any fear they feel as they expand beyond their comfort zones.