No one is pro-abortion!

We here at Elephant, and many of you—the majority of us—are pro-abortion rights.

Against abortion? Then support fostering, safe sex ed., and free contraception. That, not making it illegal, or abstinence, works. Making it illegal only makes it more dangerous.

Pro-life? Support the lives of women. Yes, babies, and fetuses matter, but let’s start with the would-be mother. They’re already here, and we must think about them, first.

Not satisfied? Fetuses are people too? Then support them after birth, again, have you fostered? Do you support public education, health care for all?

My mom had an abortion. It was sad for her. But it was safe. I’m grateful for that. It wasn’t done casually. It was done with love, and responsibility. Bearing a child, for (fathers, too!) requires responsibility. There should be and is no shame in making a responsible, safe decision.

Abortion rates in the U.S. have been trending down for nearly 40 years. 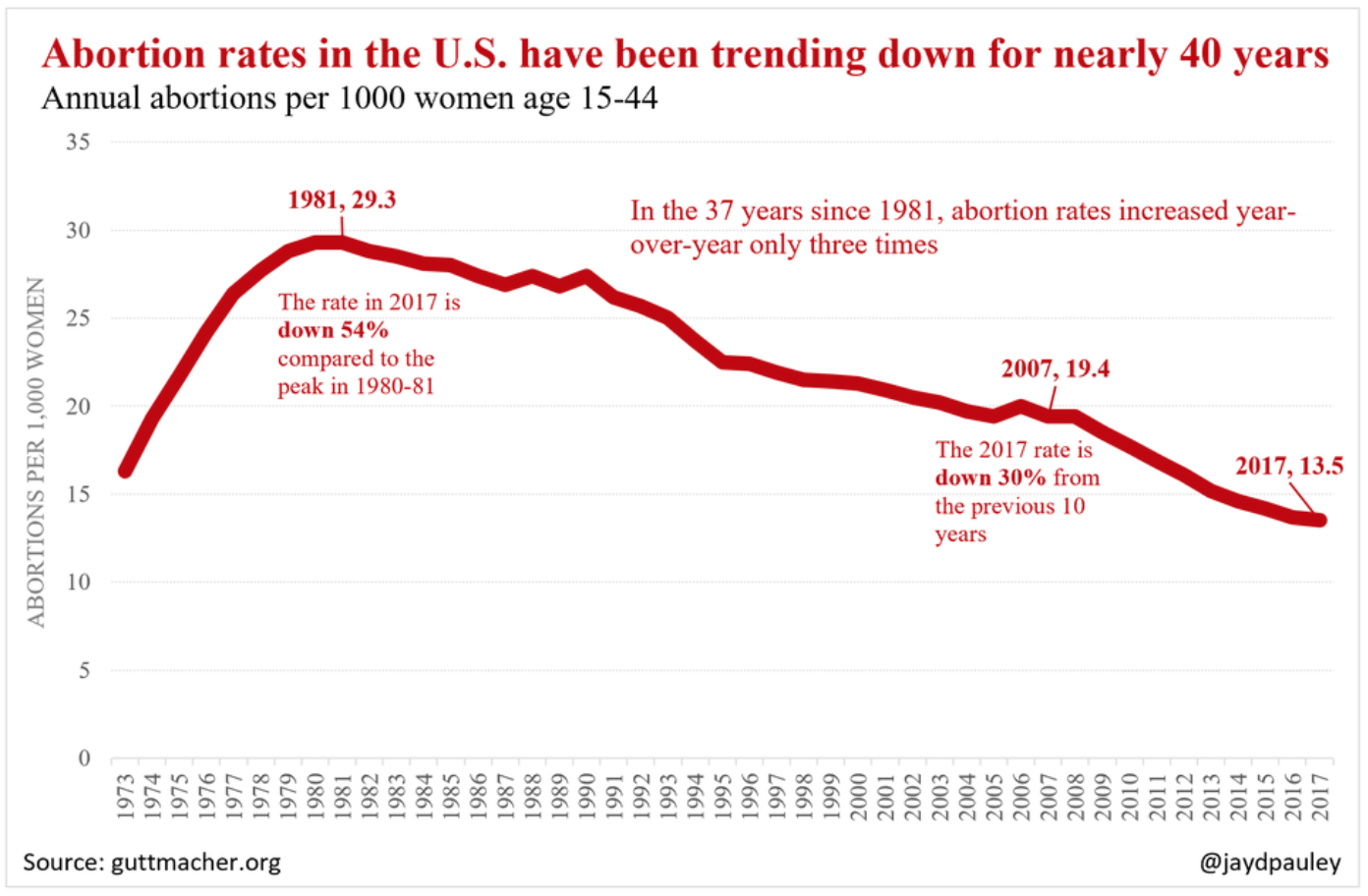 Giving access to free and low-cost birth control saves the U.S. Government (and, you know, taxpayers) at least $17 billion a year…and it results in fewer abortions. And that’s not to mention offering basic sex education. 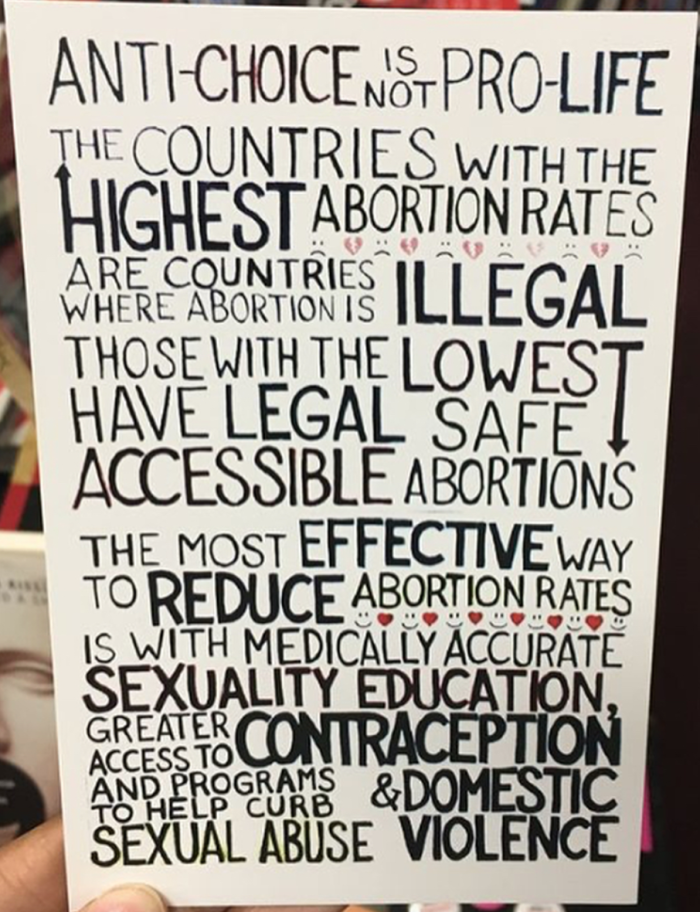 “I accept my church’s position on abortion, but I refuse to impose it on others.” ~  Joe Biden

One thing that works to reduce abortions—sex ed.

One thing that endangers life—the baby’s and the mother’s—back alley illegal procedures and suppression.
This is a false wedge issue foisted by politicians who don’t care about life (Alabama, for example, is among the worst in the US in infant mortality, but they’re anti-healthcare).

Voting matters. Show up. Register. Let’s flood our world with love. For those saying abortion is murder, I point you to the poster above, and my videos here in this article.

Colorado’s investment in IUDs and other fire-and-forget birth control produced a “miracle.” Teen births and abortions dropped by nearly 50%, and the birth-rate among teens who were already mothers fell by 58%; there were also dramatic reductions in high-risk births. (boingboing.net) 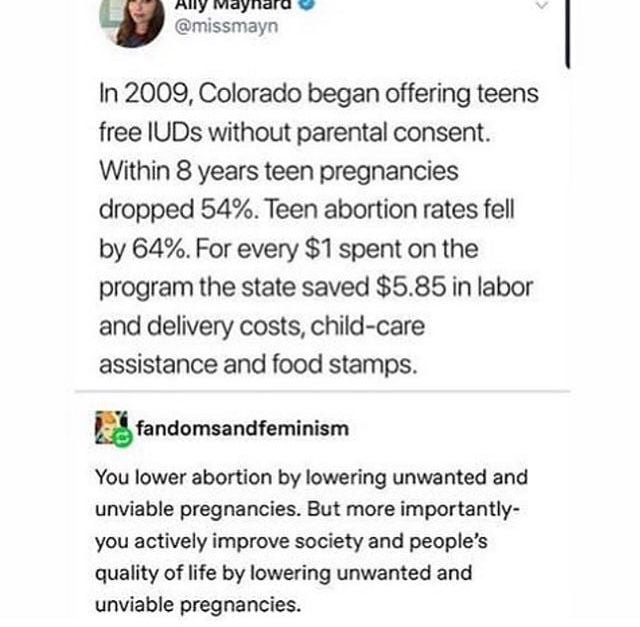 We were warned. When McConnell and Trump stole a SCOTUS seat, shifting the balance by two, we could see this coming.

We’re all united in wanting to reduce abortions. And it’s been working, dramatically. It’s the “how” that is creating a lot of confusion, pain, and suffering.

If we’re pro-life, and I hope we are all “for life”, we need to and must want to protect the would-be mother, too, and first. If we’re truly pro-life, we must and need to invest in free contraception and sex ed, which are proven to reduce abortions. If we want to make abortion illegal, we must realize that doesn’t get rid of abortions, it gets rid of safe abortions. That endangers the mother, and that isn’t “pro-life.” ⁠
⁠
If we actually care about progress and solutions and helping, Keep reading for stats and solutions beyond yelling at each other. ⁠
⁠
PS: if we’re pro-life, we better give a care about our climate crisis, and fast, and now.

"Alternatively make sex education mandatory, none of this abstinence only bullshit, & provide free contraceptives to anyone who wants them. Every state/country that's done this has seen a drastic decrease in unwanted pregnancies & therefore abortions." https://t.co/kjAtCXfR63 pic.twitter.com/GxPxhy5wNU

Stories like this happen every day across this country:⠀
⠀
“I will tell this here, although it will probably be buried. I wanted children, so much so that my husband and I did fertility treatments to get pregnant. We were as careful as we could be and still be successful. And we were successful, too successful actually. I got pregnant with triplets and we were devastated. We did research and ran the numbers, factored in my health and no matter how we looked at it, it just looked like too much of a risk for all of us. We decided to have a selective reduction, which is basically an abortion where they take the one that looks the unhealthiest and leave the remainder, leaving me with twins. Because of the positioning of my uterus, I was forced to wait until 14 weeks to get the reduction even though we saw them before the 6 week mark.⠀
⠀
Having decided that we had to sacrifice one to save two, we knew that we would probably never know if we had made the right decision. And then we found out that we did make the right choice. I was put on hospital bed rest at 23 weeks with just a 7-15 percent survival rate per baby. My body was just not equipped to handle two babies, much less three. I managed to stay in the hospital until 28 weeks before I delivered them. They came home on Monday after staying in the NICU for 52 days. We still have a month before we even reach my due date.⠀
⠀
This was twins… I would have not made it even that far with triplets. I undoubtedly made the right decision even though I will always wonder about the baby that I didn’t have. If abortion were illegal, I would have lost all of three of them and possibly could have died as I began to develop preeclampsia which can be fatal for the mother.⠀
⠀
I have always been pro choice even though I never would have an abortion myself, but then I needed one. Not wanted one… needed one. I am so glad that I was able to get one because I wouldn’t have my two beautiful healthy babies otherwise.” ~ a comment, on Reddit.
⠀
Watch Waylon’s video on elephantjournal.com: “No one is pro-abortion.”

Teen birth rates spiked in Texas after funding for family planning services was reduced by 67% in 2011: chron.com/news/h…

Another video discussion via Waylon:

We’re all united in wanting to reduce abortions. It’s the how that is creating a lot of confusion, pain, and suffering.

Because this is about controlling women, not protecting fetuses:

“Data Shows Contraception Lowers Abortion Rates and Saves Billions, but Why Do Republicans Continually Fight to Deny Women the Right to Birth Control.”

Bonus: think Alabama passionately cares about fetuses? They don’t even care about babies: “Alabama has the 2nd highest infant mortality rate out of all 50 states.” Or children: look up their rankings in healthcare, or education.
Vote.

“If you declined to vote in 2016 for the only viable alternative to President Trump and his judicial picks, please vote next time.” 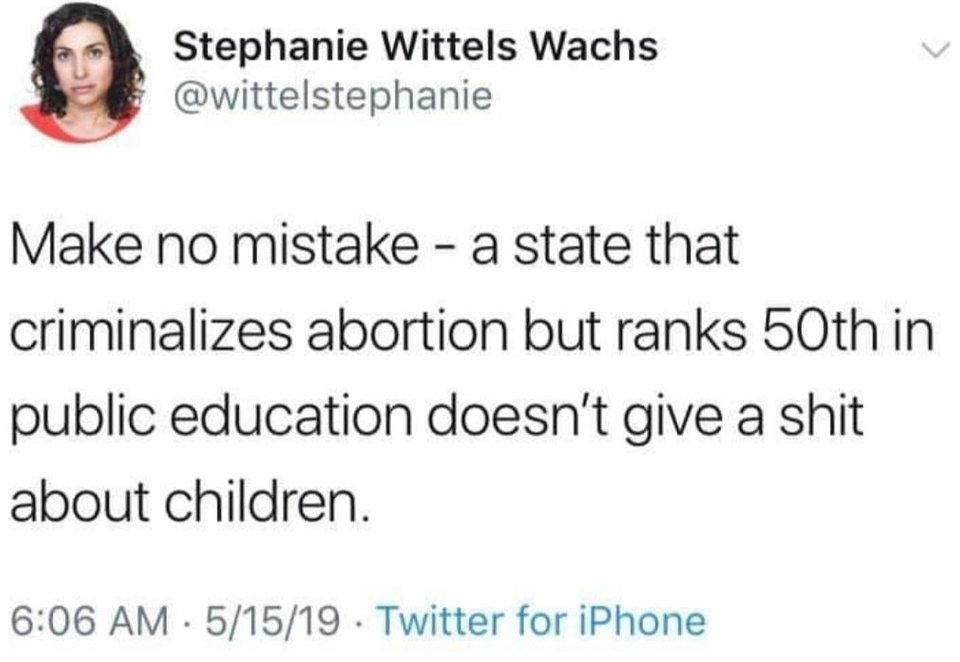 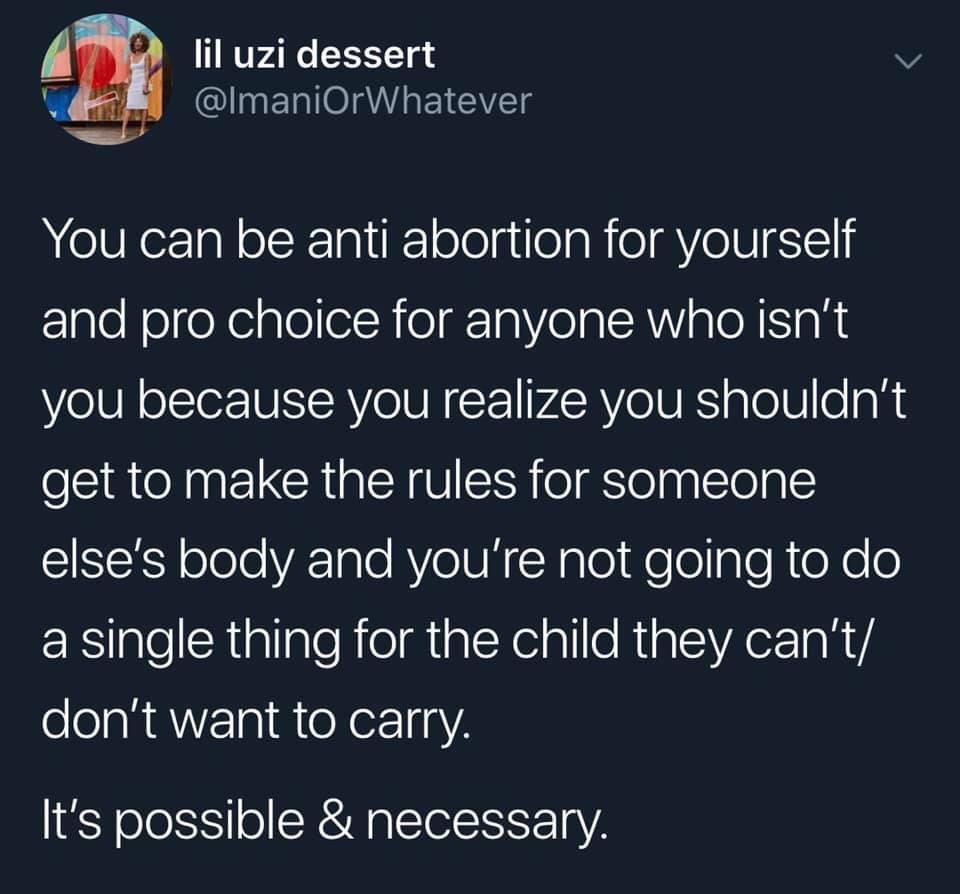 “The unborn” are a convenient group of people to advocate for. They never make demands of you; they are morally uncomplicated, unlike the incarcerated, addicted, or the chronically poor; they don’t resent your condescension or complain that you are not politically correct; unlike widows, they don’t ask you to question patriarchy; unlike orphans, they don’t need money, education, or childcare; unlike aliens, they don’t bring all that racial, cultural, and religious baggage that you dislike; they allow you to feel good about yourself without any work at creating or maintaining relationships; and when they are born, you can forget about them, because they cease to be unborn. It’s almost as if, by being born, they have died to you. You can love the unborn and advocate for them without substantially challenging your own wealth, power, or privilege, without re-imagining social structures, apologizing, or making reparations to anyone. They are, in short, the perfect people to love if you want to claim you love Jesus but actually dislike people who breathe. Prisoners? Immigrants? The sick? The poor? Widows? Orphans? All the groups that are specifically mentioned in the Bible? They all get thrown under the bus for the unborn 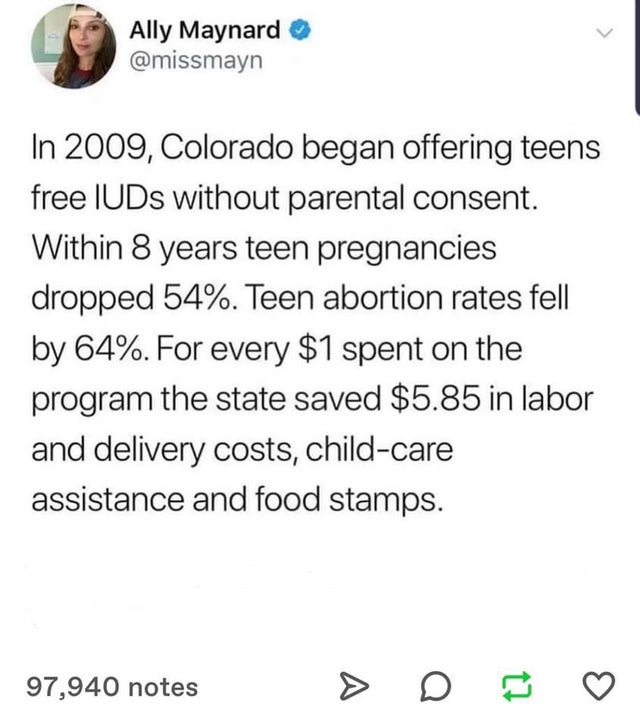 “I always say it and I’ll say it again—

Any person who says they are “Pro Life” that isn’t fully behind robust Sexual Education and easy and cheap access to Contraception is not serious about actually reducing Abortions, because the aforementioned things are the only things that have ever actually worked to reduce abortion numbers, everything else is bullshit and has never worked.” ~ a comment.