Finding Truth in a Post-Truth Society.

Many of us have been saying this lately. I break into tears at least once a day, moved either by outrage or awe. I’m horrified by much of what I see, and inspired by the bravery of those standing up to it. I’m worried. I can feel a collective sense of worry growing around me.

Our news cycle runs at a pace nearly impossible to keep up with, and the definitions of “news” is becoming increasingly loose. I recently read a think-piece that was a response to a think-piece someone had written about a Facebook status that referenced an article. I read it a mere four hours after that initial article was posted. If the pace is breathtaking, consider, for a moment, the volume of output that pace creates.

On January 21, I crossed the border into America with a busload of Canadian women to participate in the Women’s March on Washington. I witnessed the streets of Washington, D.C overflowing. I heard the organizers announce a change in our route because the numbers were too great for the original plan. 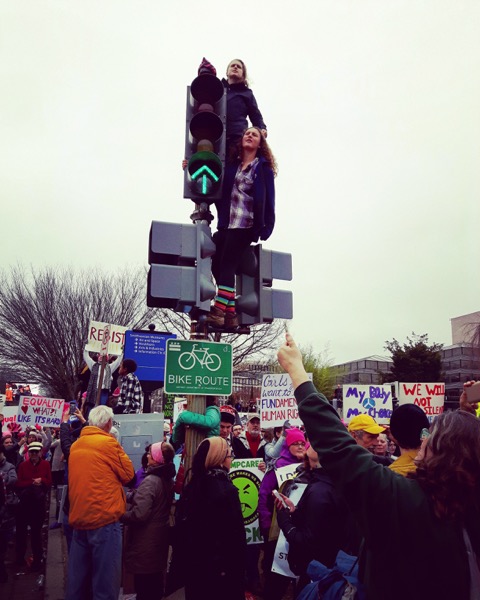 I spoke with a number of people who had been there the day before, for the presidential inauguration, who excitedly showed me the vast expanses that had previously been empty. I marched past stands, iconically empty in the previous day’s news, now filled with pink hats and carefully crafted signs expressing outrage, humour, and hope.

But when my fellow marchers and I gathered around CNN that evening, the news cycle had already moved on from the powerful experience I had just lived. Instead, they were dealing with the initial shock that the White House’s new inhabitants had blatantly lied to the public. Their claim: the attendance at the inauguration had been the largest in history.

The numbers they cited inferred that there were twice as many people at the inauguration as there had been at the march. And my version of reality—my truth—was not the one being represented. When questioned, a White House representative referred to these lies as “alternative facts.” With a straight face.

As comical as it was, she was changing the narrative, which, granted, has been the way of the politician and the publicist for decades. But this time, a line was crossed. If the current White House administration was erasing the notion of a lie, what does that now mean for the notion of truth? Where does building a narrative end, and propaganda begin?

It has long been said that identity is a construction. Our choice of wardrobe, hairstyle, brand allegiance, and the way one orders a coffee at Starbucks (and the choice of whether to even be seen at Starbucks) are all decisions that affect how we will be interpreted by those around us.

The rise of social media has extended this process, creating opportunities to not only build an identity, but an audience, for an ongoing performance. In fact, our identities are curated—by us.

In the art world, the role of the curator is one of massive responsibility. Not only do curators make decisions about what should be seen, but they interpret and provide context for that work. Inherently their job is one of omission, which carries with it a great deal of power—a platform with which to silence.

And now, we the people, are being offered this crucial role, and all the power that comes with it. And it is no longer our own identity for which we are responsible—it is the truth itself. The Oxford Word of the Year in 2016 was “post-truth,” and with the declaration of “alternative facts” on January 22nd, we’ve reached a tipping point. An invitation.

Truth has become a choice. One can dismiss the facts before them in favour of something more agreeable. Cognitive dissonance is in hyperdrive. The news has become an art form. We’ve been on this road for a while now. We watch the news stations that tell us what we already believe, and mock the ones that don’t. News outlets are multiplying and specializing, curating specifically to the tastes and truths of their intended audience.

Even an earnest desire to “stay open” to alternative viewpoints can prove difficult, because social media algorithms and search engines are designed to give us exactly what we want.

Is this what democracy looks like? A world in which each individual controls the narrative of the world at large? A kind of Sim City life where nothing is totally real, and none of it can quite be taken seriously?

Perhaps this is empowering, but I find it frightening. I’m not ready for this kind of responsibility! And I don’t trust the rest of the population to use this power wisely. This has been my battle, my obsession, since I returned home to Canada.

Having no expertise other than my own lived experience, I am reluctant to give advice on what to do about all of this.

But I will share my plan: Moving forward, I will practice radical curiosity. I will curate my truth based on that sole criterion. I will remain curious about the people I disagree with, about the research that supports the ideas I already believe, and about both the problems being presented and their proposed solutions.

A scientist dissecting the human experience, I will endeavour to uncover the “why” behind every post and piece of clickbait. This moment in history offers us an opportunity to delve into the realities of other human beings, and I plan to indulge.

What I believe is no longer the point. Now is the time to shift away from a place of ego, creating space in which whispers of truth can emerge.

But perhaps most importantly, I will never believe that I have uncovered an ultimate truth. About this, I must be vigilant. I will work to accept the discomfort of uncertainty, trusting that my curiosity will draw me ever closer. It is only through this lens that I believe myself capable of the stamina and fortitude necessary to remain engaged, rather than shut down in the years to come. And that, I think, is our greatest responsibility. 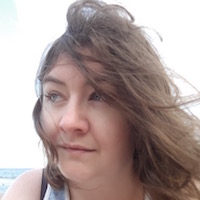