How I Gave Up Trying to Cure my Depression & Found Happiness.

I have been told many times before that I write as though I have lived a long time, and I have often thought about why that is.

I feel like I have lived several different lives. There was my childhood. A time when everything was light, and free, and I would run wild around my family farm, always full of life, always happy.

Then there was my father’s suicide and the three years that followed—years in which my mind remained light, just more mature, wiser, and more aware of the world and the fragility of life.

Then there were two years where everything got slowly more complex and dark. My thoughts no longer let me feel the freedom I once knew, and over a long and gradual process, I found myself suffocating.

Recently, I had an interesting conversation with someone who asked me how I got over depression. Here is the truth that nobody really addresses—you don’t! An alcoholic might not drink, but they will always be an alcoholic.

When I was seeking help for depression people would tell me:

“You will get better.”

“Now take this pill and talk it out.”

Nothing helped. In fact, the more I wished that I could get my old mind back, the worse I got. I would be filled with more guilt because I couldn’t snap out if it, and a sadness because I couldn’t remember how my mind used to be. I knew that it used to be different and that, suddenly, it just didn’t work anymore.

I think that belief that it could go back to the way it was actually stopped me from pulling myself out of it. For me, depression is when your mind gets stuck, like a CD that gets scratched and keeps playing the same moment over and over. Typically the thing being replayed is the thing that you fear most, your greatest weakness, whatever it is in you that is the source of your inner most shame or vulnerability. For me it was the fear that I could have stopped my dad from killing himself, and that if I had been more, or meant more, or done more, then he would have stayed.

These repetitive thoughts would drag me down again and again, making me feel useless and guilty—until I really didn’t feel I was worth anything at all to anyone.

Then, once the depression has you, it uses that fixation to seep into everything else in your life. You are not good enough for that person, that feeling, that job, and so on, until you are so tired of your own self you can hardly find the strength the breathe.

In that state, you don’t want to see anyone. You can’t explain to them why you are so down. You can’t tell your family because it is a burden that they can’t see. You may feel like saying, “Why should they have to worry anyway about someone so utterly useless and pathetic?”

You don’t have cancer; you aren’t physically sick, so how can you explain to them that some days the black is so bad you even start to think about the peace that death might bring? Then the self recrimination comes: How selfish is that? You are horrible. How can you think like that?

These are the thought patterns that appear over and over, and even though you know it’s ridiculous, that doesn’t stop it from taking over everything that you are.

This mind of someone who is mentally depressed doesn’t disappear. You can’t just undo it, or reverse it, or reprogram it.

The key to curing mental illness for me, is first accepting it, then embracing it, and then using it to get things done.

Sure, my mind can overanalyse. It can focus on one point and stay there, and if I let it focus on the bad, I, and most people with a mental illness, can go straight back into a black hole.

Instead, I decided one day that I would be an international horse rider. I convinced myself I had to get fit and healthy to ride my horse. Every second of every day after that I channeled all my mind energy—that was previously used to belittle and suffocate myself—into my goal. I used the same amount of drive, determination, and strength I had put into going down into my efforts to go back up.

It was time consuming and it took a lot of work. I had to learn to listen to every thought, turn it around to make it useful and positive, and then put it to use.

Every, “You don’t deserve…” becomes, “You deserve this because…” And this process has to happen about 100,000 times before it starts to actually shift the balance in your brain from “bad” to “good.”

I think one of the greatest hurdles of depression is the search for a cure. Or that the person suffering from it themselves wants to be cured. When I realised that was never going to happen, I got proactive about using my mind to get where I wanted to be. If I didn’t have my mind, would I have been able to move overseas alone, find a horse, start competing, and actually make it onto the international scene? It seems unlikely. 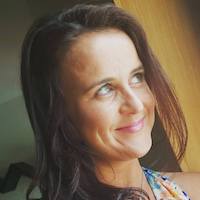