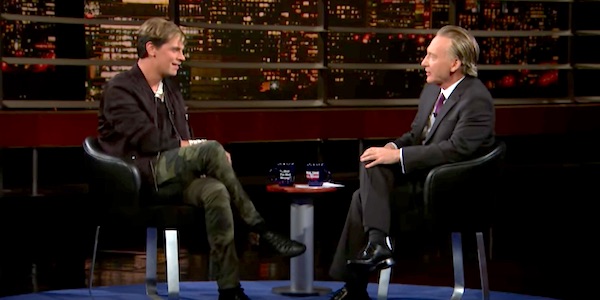 Bellied up to a bar in Fargo, North Dakota with my dad last spring, we dove into a heated political debate.

This was a bad idea for several reasons.

First, we had just left my mom at the hospital where she had undergone a complicated and dangerous surgery on her spine. While the doctors were pleased with the outcome, our stress and worry levels had been high. My dad and I had only just begun to relax.

Second, the beers in front of us were not our first.

Third, he is a life-long Republican who was likely voting for Donald Trump. I am a Democrat who was unabashedly voting for Hillary Clinton.

The only thing the two of us agreed on during our debate was that we both wished Marco Rubio had been the Republican nominee. For this point of agreement, I was grateful.

At one point in the conversation my dad said, “You should check out Milo Yiannopoulos. You’d like him.”

Knowing that my dad is a fan of both Rush Limbaugh and Newt Gingrich, I nodded and said, “Sure.” I made no mental notes to check out this guy.

Yet, a name like Yiannopoulos tends to stick. And the universe, like magic, began happily sending me all kinds of information about him. Whether I liked it or not, I was destined to know who he was and what he stood for. A lot, I found out. And loudly, too.

I learned about his role in Gamergate. I read an article he wrote for Breitbart, where he is a senior editor. The title says all, “Feminist Bullies Tearing the Video Game Industry Apart.”

I heard about the racist and sexist comments he made on Twitter toward Leslie Jones, one of the stars of the Ghostbusters film. Shortly after this, Milo was banned from Twitter for life. He celebrated this, calling it “A great gift.” I didn’t follow all his comments, but really, if Donald Trump has not yet been banned from Twitter, what must Yiannopoulus have said?

Recently, I cheered for Roxanne Gay when she pulled her book from Simon and Schuster in a protest against their decision to publish Milo’s book, “Dangerous.”

And all throughout, I kept shaking my head thinking: My dad thought I’d like this guy.

I have to admit though, all this time I’d never watched a video of him. This changed last Friday when he appeared as a guest on Bill Maher’s Real Time on HBO.

I watched him come out and take a seat.

Quirky, or nervous, I’m not sure.

Trying to stir stuff up, glad that Bill isn’t biting.

I think he just needs a hug.

When the interview was over and no fireworks had gone off, the phrase in my mind was: He seems like a kid trying to get attention, albeit bad attention. This, even though I knew of all the hateful things he’d done and said. He did have an appeal, I got it.

The next morning, I agreed with all the commentaries I read regarding the interview.

“Bill Maher seemed bored.” Yes, I agreed. He did. Personally, I think he was unimpressed.

“Bill Maher and Milo Yiannoponos find common ground.” They did actually, as they are both huge proponents of free speech even when it leans into the incendiary.

“Bill Maher upstaged by Milo Yiannopoulos.” Well, if that means he talked more and drew more attention, then yes.

Of course, we all see what we want to see, which is exactly what the headlines reflected.

The left finds Milo Yiannopoulos repulsive and hateful. Meanwhile, he has been a poster boy for the alt-right. And even mainstream conservatives, people like my dad who put all their cards in on Donald Trump, have found a hero in Milo. This is largely because he happily pushes all our triggers on the left, making us look hateful, intolerant and much like the snowflakes they want to see us as. The incident at Berkeley, still widely misunderstood, is the perfect example.

But yesterday, his fate changed and his hero status crumbled. Video and audio emerged where Milo appears to condone pedophilia. Immediately after, he was disinvited from speaking at the CPAC (Conservative Political Action Conference) where he was to be a keynote speaker. After that, news broke that Simon and Schuster cancelled their book deal with him. His house of hate speech fell down on top of him.

Seems that conservatives, and book publishers too, finally found the line they wouldn’t cross: pedophilia.

I’m throwing up my hands.

Everything that he has said and done to this point didn’t cross the line?

Not the fact that he held up a sign that read, “Rape Culture and Harry Potter: Both Fantasy,” at a protest march against rape culture.

Not the fact that he said, “Gay rights have made us dumber.” (Even though he himself is gay.)

Up until yesterday, apparently, no amount of vitriol toward fellow human beings made people walk away from him, not when there was money to be made or a sense of power over others to indulge in.

This is our reality: We had to go all the way to pedophilia to find out at what point integrity kicked in.

Good news. There is a line after all, although, watching Donald Trump’s comments over the past couple years had me wondering. Albeit the line is far, far beyond what any reasonable person would have expected from the party of “family values,” the party of “humankind.”

Last night, Milo put out a Facebook Live video explaining that he does not advocate for sexual behavior between children and adults. I watched some of it. He seems sincere, either that or he is smarting from these recent losses and seeking fresh attention to cover up the pain.

Either way, I admit he stokes my curiosity. What makes someone behave like this? What drives someone to choose discord over peace at every opportunity, to indulge in the pain it causes?

I googled around and found this quote from him in an interview with Kristen Brown:

“I didn’t like me very much and so I created this comedy character. And now they’ve converged.”

Goddess help any of us who “converge” with the many roles we play. What a confined space that would be to live in. This quote sounds to me like a cry for help.

I also found this quote from Milo:

“I could spend all day, everyday reading stuff people post about me on the Internet.”

Well, Milo, I hope you find this article, because this is what I want you to hear:

“You, like all of us, have every right to further your own healing and find your self-worth in creative ways. But, you don’t have a right to purposefully hurt others along your way. I believe you can learn from this. Who knows? Perhaps, you might reengage as a wiser, kinder being, one who works for healing, not dividing.”

Anything is possible. People can and do change. If this happens, then I do think my dad would be right, I would definitely like this guy.

Either way, I’m sure the universe will ensure that I’m still watching.