A Mother’s Worst Nightmare: “Momma, Someone called me Fat Today.” 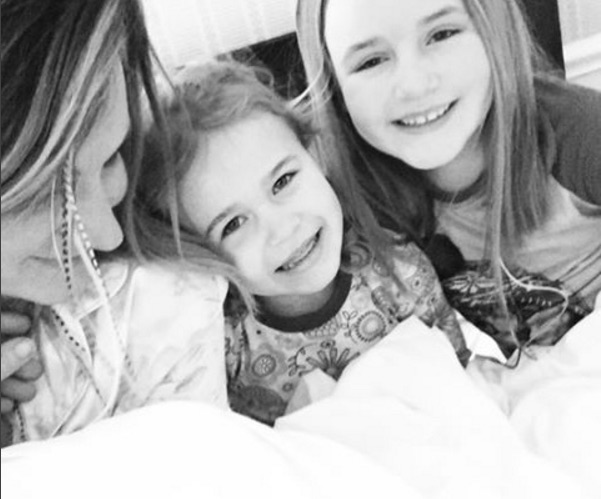 My heart sank as I heard my daughter utter these words to me.

It was an ordinary day, and my free-spirited daughter had just climbed into my car after I had picked her up from school. Her hair was long and lightened from a summer of playing outside, and she had on her favorite pair of hippy pants.

She was radiating confidence.

As we were stopped at a light, she looked over to me and said those few heartbreaking words that no mother—or father—ever wants to hear.

“Momma, someone called me fat today.”

There is no rule book for how to raise daughters to have a healthy body image. But in this era of plasticized social media, where narcissistic selfies are the norm, we must strive extra hard to instill this.

It takes effort to not embrace the thin ideal.

I’ve tried to model how I want my daughters to view their bodies through how they see me talk about and treat my own. We don’t own a scale in our home, and they have never seen me on a crash diet. They’ve never heard me say that I am ugly or fat. They haven’t witnessed me beat myself up because I wanted ice cream or pizza, or fanatically work out because I am afraid of a little jiggle.

In fact, I rather like my jiggle—and so do my daughters.

I’ve been conscious and mindful about my attitude toward my own body, because I know very well that what my daughters will learn more from what I demonstrate than what I intentionally try to teach.

But still it crushed me—not just me, but the little girl inside of me whose body was commented on by people who thought it was their right to do so. Somehow, it’s still acceptable for friends, family members, and even strangers to comment on my daughter’s physical appearance.

Girls are taught that their appearance is what matters most. Never have I heard a stranger commenting on a boy’s clothing or appearance as they do with girls—and until this attitude changes, it becomes our responsibility as parents to help instill the ideal that girls and women are so much more than looks. I tell my girls often that our looks are just the window dressing, the curtains, and what matters most is what’s inside—our hearts, minds, and how we treat others.

But it’s a war that wages on every single day, and the moment she told me someone called her fat, my first thought was, Does anything I say even matter if there are still children being raised with the belief that these words and actions are acceptable?

It seems that my mind whirled around, but all I really wanted to know was how she was feeling about it. I was nervous she’d feel crushed and deflated—or worse, would actually begin to think that she was fat. How did she react to such a hurtful comment?

And so, I looked over at my baby and asked what she did when this person called her that. She answered, “Well, I told them I’m not, and then I called them a jerk.”

In that moment, I knew that just maybe it was going to be alright. I might have done something right after all; I might have had enough conversations and spent enough time talking about what matters most that a bit of it may have rubbed of.

Maybe, just maybe, she was confident in whoever she was growing into.

The only thing I can do is try to make it so that no matter what anyone says to her, it’s my voice that she hears the loudest.

Not all of us are born to have slim bodies. Some of us are thicker, but none of us are less beautiful because of it. But regardless of body type, no body deserves to be talked about, judged, or even viewed as being positive or negative.

Unfortunately, I’m fairly sure this won’t be the last time that this happens.

It won’t be the last time that she is judged for her appearance, or the last time someone feels the need to comment on her weight. I could shrug my shoulders and say that we all go through it, and we all end up fine—but that’s not true.

Because whether we are ridiculed because of our flat chests, thick thighs, too short hair, or whatever may be the object of someone’s attention, the reality is that each time we are made to feel like we are flawed, we begin to see ourselves that way as well.

We begin to not think of ourselves as beautiful, but instead as an imperfection that needs to be fixed.

We are all beautiful in the way that we are meant to be.

My only hope is that no matter how old she gets, or no matter who tries to spin lies inside of her beautiful mind, she will know that her worth is so much deeper than just a number on a scale—because numbers won’t ever be able to measure a beauty like hers.