An Open Letter from an Immigrant to President Trump. 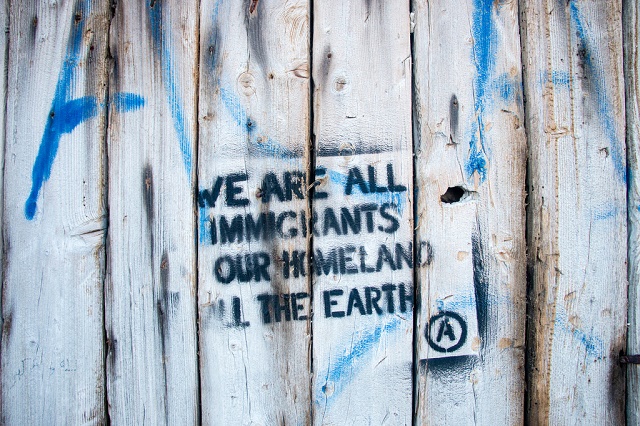 You don’t know me, and I don’t know you, but I thought I’d introduce myself.

I’m an immigrant from Poland. My adopted country is Canada—that makes us neighbors. I’m North American—and so are Mexican people.

And…if you subscribe to the definition below, we’re also American.

“When used with a grammatical qualifier, the adjective American can mean ‘of or relating to the Americas,’ as in Latin American or Indigenous American.” ~ Wikipedia

“American” can mean a whole lot of things; it does not only relate to white, middle class, “good Christian people” born in the present day United States. If we look back in history, Texas was much less American than it was Mexican.

A border should never mean more than a human life.

Where does the name “America” come from anyway?

“The word America comes from a lesser-known navigator and explorer, Amerigo Vespucci. Like Columbus, Vespucci traveled to the New World (first in 1499 and again in 1502). Unlike Columbus, Vespucci wrote about it. Vespucci’s accounts of his travels were published in 1502 and 1504 and were widely read in Europe. Columbus was also hindered because he thought he had discovered another route to Asia; he didn’t realize America was a whole new continent. Vespucci, however, realized that America was not contiguous with Asia. He was also the first to call it the New World, or Novus Mundus in Latin, in his books.” ~ DictionaryBlog

As it turns out, a cartographer decided on the name of America. I know a lot about Canada’s history, but American history fascinates me also. That includes the history of the people who were already here, before all of us immigrants landed on these shores.

Yup, there were people already here.

I know that history books in American schools teach about Columbus, but I think Amerigo Vespucci should be mentioned to the children as well. He was a foreigner who their country was named after—kind of a cool guy.

Anyway, interestingly, Frederick Christ Trump—your German grandfather—also immigrated to America in 1885, but before that, he made his fortune running the Arctic Restaurant and Hotel in Bennett, British Columbia, during the Klondike Gold Rush. That’s in the same province that I live in! Imagine that. I don’t know if he was vetted, but he sure as heck made a big contribution to his country once he was let in. You are the benefactor of that legacy.

I have never lived in a tower bearing my name, so can’t really relate to that lifestyle—and I bet you can’t relate to how I lived in a communist country before I moved to Canada. I’ll just tell you a little bit…

On Sundays, the hot water was miraculously turned on in apartment buildings—so if we wanted to do our laundry, have a bath, or go to church, we had a decision to make. A rather sneaky way of keeping people from attending. Ah, those communists! They had a funny sense of humor.

If my grandmother and I needed groceries mid-week, we would rise at five in the morning to leave our one-room apartment and walk a few miles to the store, where we stood in line for a long time in the freezing cold. When it was finally our turn, more often than not, we would find the shelves bare, and we’d go home empty-handed. Ironically, if we happened to have American dollars, we could buy whatever we wanted. Even real coffee, not that sh*t made from chicory.

It took 10 years of being on a government list to get into an apartment. Same for a car. Communism was not so communal after all.

Every May first, we would stand roadside and watch the Russian (you know them) tanks roll through town to remind us that Poland had been sacrificed to Russia in a peacekeeping measure. I call it betrayal…but tomato, tom-ah-toe.

There wasn’t any healthcare to speak of. My mama died of cancer. We couldn’t afford more than basic hospitalization.

We ate potatoes and cabbage all winter long. But there was no bacon—that cost American dollars. I had relatives in Chicago and Toronto who used to send me crates of oranges. You can see how one would begin to wonder about this great place where they had oranges in the wintertime, and their money was better than everyone else’s.

Mr. President, the day came when my grandmother packed up all my things. She put me on a plane to Canada, saying, “There will never be any war there.” And I never saw her again.

The first time I walked into a North American grocery store, I had such severe culture shock that I burst into loud crying, much to my adoptive parents chagrin. Years later, still remembering the Saturday markets in my little, Polish village, I began working on setting up markets in my township and promoting organic agriculture, environmental stewardship, and local economies.

You see, coming from somewhere else makes one appreciate what the Western world has to offer. I’ve cleaned tables, toilets, built a business that provided jobs for others, and raised children in freedom and abundance.

Immigrants understand hard work and hard times. We’ve sometimes been hungry, sometimes been in danger, sometimes had to make hard decisions, and sometimes sent our children away to relatives in America while staying behind.

America is not great because it is a place; it is great because of the people. People are what matter. People matter more than being the best armed country in the world.

If you would like to arm your people with something good, arm them with healthcare. I know, it is a very complicated matter. You say no one knew how complicated it could be—but of course they knew! Everyone knows it’s complicated; you’re running a rather large country with over 360 million people! But it can be done. You can call my Prime Minister, Justin Trudeau. His father established country-wide healthcare in Canada.

I’ve always said that if the political will is there, all compassionate acts of government are possible.

We humans can learn from each other. You could learn from an immigrant’s perspective, and I could learn about how your particular position in life could create new pathways for real wealth in America. Real wealth lies in the opportunity for each citizen to know they are in the hands of a leader who values what it means to live in their world. Step into every-man’s shoes and offer them a chance to live in yours, via the lack of worry about healthcare, or what kind of environment they are leaving to their children.

I think that if you want to show your business acumen, spend some money on the foundation of the nation—its health and peaceful integration of all people, no matter their skin color or religion. Show every man and woman that they matter, no matter where they are from. Show your neighbors in Canada, and the world at large, that leadership is not won with hurried promises and confusing banter, but with compassionate action.

I am reminded of one of my favorite quotes by Zig Ziglar, who wrote Closing the Sale. It is: “People don’t care how much you know, until they know how much you care.”

How about closing the sale, Mr. President? In four years, you can leave a legacy of incredible wisdom and political accomplishment, or you can leave a torn-apart country without a shred of forward movement.

The world is watching.

An Immigrant and Concerned World Citizen.