She is a Wild Card, the Omega Female. 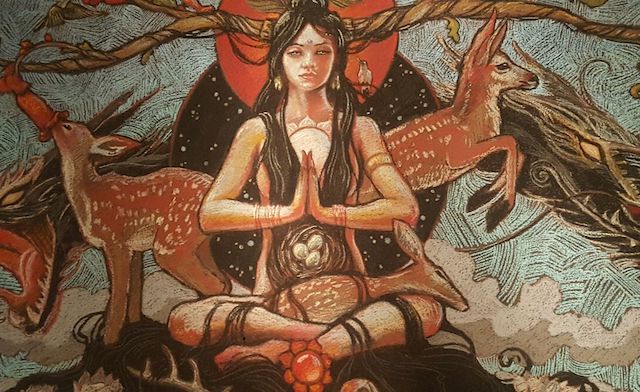 She is part of the pack, but tentatively lingers on the edge of it.

Always looking for her escape.

She follows—but if you watch closely, she is silently carving her own route.

But she is not to be underestimated; though she is the underdog, she is fiercely protective of her pack.

For now she subserviently conforms, though her time to shine is nearing and soon she will rise.

Some misunderstand her. They think she is complicated, awkward, and see her as a challenge.

But they are wasting their time if they think they will take her mind with their swollen-ego games.

She will wrestle, roll over, and let them think they are superior so they can win the battle…for now. But she knows they will not win the psychological war.

For she is a rebellious force with whispers more powerful than hurricanes.

She imprints a haunting reflection on anyone who crosses her path and meets the flickering bewitchment of her gaze.

This iconic beauty is a dazzling, ancient starlight, shimmering on the mountainside, howling her conflicting emotions to the midnight Moon.

She has been hurt, viciously attacked, and she is wary so she tentatively treads to avoid risking carnage with those who torment and taunt her.

But do not mistake her wounded stance for weakness or fear; she has a stormy, tempestuous streak pulsing through her veins and a ferocious fire is raging within, burning up salt and bones.

She appears restrained but she is strong and wise, curiously observing, collecting a mixture of skills and knowledge so that as soon as her destined moment strikes, she can break free.

Despite the agonizing pain the pack inflicted upon her, she was a soft cushion that embraced all of their frustration and aggression, and with care, she tenderly relieved their tension.

They misunderstood and misjudged her fragile exterior, so now they will live to bitterly taste their regrets and mourn her mysterious presence long after she has gone.

They will howl with grieving frenzy hoping their aching cries will reach her, and she will hear their echoes but she will never turn back.

She cared and knows the thunder will arrive, and she will temporarily suffer for her decision, but she was pinned down, dominated, and downcast for far too long.

Soon she will shape-shift into a lone warrior wolf, with wide glistening eyes, wandering the wilderness in solitude—though her humble Omega spirit will remain.

She knew they loved her and she loved them, but she also needs to put herself first for once, to stretch her limbs, head out to the unknown, and stand brave and tall.

She craves a gentle, effortless, enchanting kind of love so she will roam close to the illuminated ocean, where she can unravel her knots and heal…

…and someday, as sure as the heavens protectively rest over her, she will stumble upon it.

Image: Art by Bryce Loren Windom. Pic by Travis May.