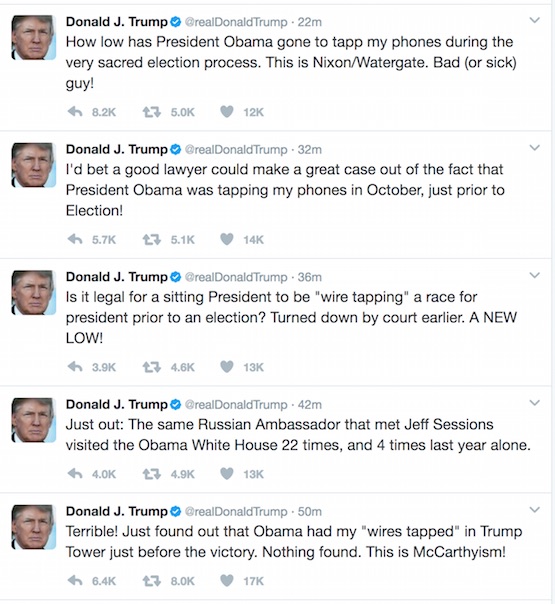 Worst of all, he managed to misspell a three-letter word, making GW look sharp. For the NY Times’ coverage, click here. Excerpts:

“Mr. Trump’s decision to lend the power of his office to such a claim — without offering any proof — was remarkable, even for a leader who has repeatedly shown himself willing to make assertions that are false or based on rumors…In one message, which Mr. Trump sent from his Palm Beach, Fla., resort at 6:35 a.m., the president said he had “just found out” that his phones had been tapped before the election. Speculation online quickly turned to the possibility that Mr. Trump had been reading an article on the Breitbart News site or listening to the conservative radio host Mark Levin; both have embraced the theory in recent days.

Amazing reply via an Obama staffer:

No President can order a wiretap. Those restrictions were put in place to protect citizens from people like you. https://t.co/lEVscjkzSw

Just when you think he can’t get any more batshit crazy, he spells tap “tapp.” Oh, and once again shows that he gets his news from #fakenews, accuses a President of Watergate after millions of his own opponent’s files were stolen, fails to distract from Russia ties and lies and pretends he respects our elections after claiming they were rigged and encouraging intimidation at the polls, voter suppression despite no evidence of fraud. The only thing believable here is that we should tap his phones, given this compromised election and his obvious disregard for rule of democratic law or ethics, generally. #nytimes #twitter