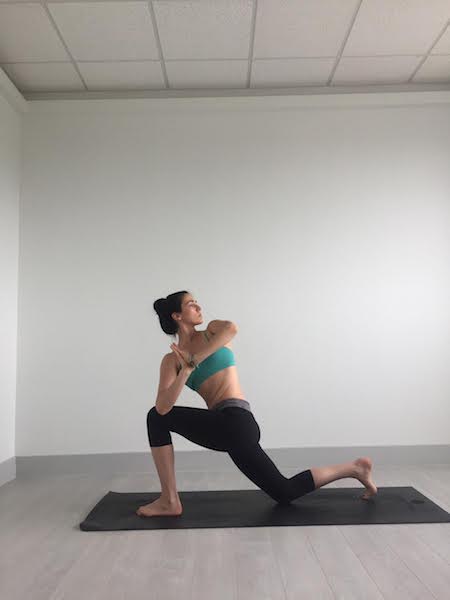 I like a big, juicy, loaded word—the kind of word, that no matter how many letters it has, holds weight.

“Can’t” used to be one of those words. I loved it in all of its toxic glory. It was efficient. It was final. It provided such a great out. “Can’t” gave me an excuse to stay comfortably, and predictably, miserable.

I can’t get into shape.

I can’t get rid of my anxiety.

I can’t change my career.

I can’t get over him.

Then, I found yoga. Yoga transformed the word from a juicy poison to a tasteless filler.

1. “Can’t” evaporates when your back is against the wall.

When I realized yoga’s power to vanquish “can’t,” was when I committed to something that I thought I couldn’t do—long distance running. Without a day of distance running training in my life, I decided to sign up for the Chicago Marathon.

I trained (poorly) and on race day, ran the whole thing. I broke three toes in the process. Afterward, most exercise was too much for my feet. So I wandered into a Bikram yoga class, because my preferred flowing style required too much ankle and toe mobility.

I’ve since embraced less controversial yoga styles, but I am glad that Bikram was the style that came to me in that moment.

The 26 postures, performed in a hot room, start with a standing series. All of them are held for a considerable amount of time. The class is comprised of seemingly impossible postures, and not only do you have to suffer through them once—you hold them twice. In those moments, no matter what shape your body is taking, you can. And, you do, because leaving isn’t an option.

As I said—Bikram’s controversial. But, that was exactly what I needed—something incredibly difficult, seemingly impossible, and with no way out. There was nothing for me to do but stay, and “can” the hell out of every moment.

2. “Can’t” loves the illusion that suffering is out of your control.

When I share “I can’t” statements with people who really love me, it annoys the crap out of them.

People who truly love me, and have my best interest at heart, know my “can’ts” aren’t true.

Even when I’ve had friends and loved ones in the gravest of situations, when they’ve seen me at my lowest, when suffering is so great, and the end is near, the realization is always, “You can let go.”

More often than not, it isn’t the tragedies of life that leave me in the “can’t” zone.

It’s daily life that has me believing that sh*tty things are going to make me miserable, and there’s nothing I can do about it. Certainly not everything that happens in life is pleasant, or desired, or fair, or wonderful.

Time on the mat creates little microcosms of stress and frustration, as well as bliss and surrender. Working through the path from “can’t” to “can” over and over again, is training in resilience. The possibility of surviving, of navigating impossible scenarios, or surrendering without suffering, takes place as a physical metaphor on the mat.

To suffer through is a choice. I can be uncomfortable and still choose to be happy. When I forget this fact, I am reminded by my students.

I have a student who came to class every day for six months with a boot on his foot. He said his doctor had given him permission to participate.

He didn’t choose to attend my slow, restorative class. No. He came to my most intense class of the week, every week, with a boot on his broken foot. Broken bones and all, he would move through class.

Some days he would ask me to refrain from offering assistance, and he would leave without a word. Other days he sought extra support, and wanted to chat for a while after class. But, every week, no matter what, he was there.

I was impressed that he would take on such a challenge while he was obviously suffering. I mean, there was a boot on his foot in a flow class! (When my foot was broken, I thought flow class was a major no-can-do).

Eventually, the boot came off, and he was still on his mat. When I spoke with him after class and asked about his injury, and congratulated him on being post-boot, I inquired about his experience with yoga during an injury, and whether yoga helped speed his healing. He said, “Oh, I didn’t come to yoga for my ankle. I come for the breathing. I just feel so good when I’m breathing!”

All this time I thought I was privy to some sort of intense physical rehabilitation. But the truth of the matter was that he didn’t give a hoot about the boot!

The suffering wasn’t even a thought in his mind. When the boot came off, nothing profoundly changed in his physical practice. He still showed up—to breathe. The only person who thought he was suffering, all that time, was me.

Once I got the full story and knew the context, his “can’t” didn’t change to “can.” Instead, the idea of “can’t” disappeared completely.

Anything. We only have a limited amount of time on this planet and it is wasted on doubt, illusion, and avoidable suffering. We have time for action, choosing happiness, supporting ourselves and others. Stay on your mat as long as you need. Use what you learn to “can” the crap out of every blessed moment.

Then, get off the mat.

As yogis we are called to adhere to aparigraha (non-hoarding). Clinging to the lessons you’ve learned on the mat, and keeping them isolated inside the walls of the studio, is doing no good. Share them. Live them.

Surprise yourself with all of your endless possibility.