You can’t take away the Pain of the World, even if you Want To. 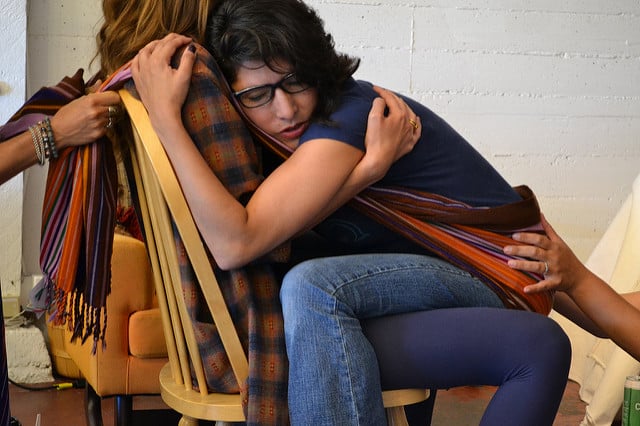 My mother never understood my depression.

As such, she was unable to help me with my apparent carelessness during my depressive episodes and had little tolerance for them in general.

Her regimen was pretty basic. Her words of consolation were along the lines of, “You have nothing to be depressed about.” A German woman of brass-knuckle words who was unwilling to display weakness, she didn’t ask me much about what my experience was like during my paralyzed states. During them, life always felt like pointless scenes filled with zombies moving through a slow motion world.

The one question my mom always did manage to muster up was, “Why do you feel the need to save the world?”

What I didn’t know for the first 24 years of my life, through sickness, hellish familial lines playing themselves out in my veins, and terribly alluring self-destructive tendencies, was that I was an empath.

I didn’t know at the time that the answer to her question was that I wanted to save the world because I carried the weight of it in all of my actions, and I was sick and tired of being sick and tired.

I could never get away with not feeling it all, which posed a problem—I thought the world’s problems were my problems.

Much like my father’s mother, who contributed a lot of her time to neighborhood kids but somehow managed to neglect her own, facing my own reality and the problems it carried was terrifying. Instead, I opened my auric field to take on the world’s, missing entirely what needed my attention the most—myself.

Somehow, I did feel deeply responsible, like I came here to save us all from the hell we’d gotten away with creating on Earth. I’d pray to God every night, asking Him to take this person or that person’s problems away and give them to me instead, because I’d be strong enough to handle them. I always—and only—wanted to take it all away.

The problem was that, as a child, I was irresponsible with what I did once I bore an energetic load for someone else. I kept it, never knowing I could let it go, fearing that it’d go back to them if I did.

Keeping it led me into seats of therapists and to a brief introduction with cancer.

I’m viscerally sensitive. If someone across the room stubs their toes, I feel it. I mean, literally, I feel it as if it’s happening to me. I’ve never been able to turn it off, but I have become more responsible with my sensitivities.

I’ve given birth three times, but only once was natural. I had a VBAC followed by two Cesareans after being told for a decade it couldn’t be done.

I wanted to feel it all—my pain, my edges, my shakes, my power, my opening, and my resistance. I wanted to feel what it felt like to lose myself by sh*tting myself in adulthood.

A year and a half later, I walked into the labor room while my friend was a couple hours into childbirth. The guttural sensations of a natural birth, the thing I was really after since missing out on it via two C-sections, can only be known by a woman who’s known labor.

After 36 hours of my own labor, I knew them pretty well.

I could see her exhaustion and I wanted to say, “Even though it hurts, it’ll be over in what feels like minutes,” but I remembered how aggravating the cheerleading was during my labor. I remembered what it was like to know that no matter who was there, not one of the spectators could do a damn thing for me.

Standing there with my friend, that fact annoyed me. I felt deep trepidation drizzled with a bit of self-doubt.

She wanted this, and here she was, meeting the upper threshold of her tolerance for pain.

Holding space is kinda my forte, so I sat back in silence, rocking in my chair and watching her move through a contraction. I felt my guts contract as if it were happening to me, but I knew that it wasn’t actually mine to carry.

For the first time in my life, I had a vivid awakening to a new cellular understanding of what it means to take away someone’s pain.

And for the first time, I didn’t want to.

Without her pain, she would not meet her gain. Taking it away from her would mean she was missing the part where the process of pain climaxes to the gain, and I wanted her to see herself through it.

I wanted her to know her own strength when she felt ripped wide open, vulnerable and unsure, just to meet herself on the other side with grace.

Funny thing is, whether I wanted to take away her pain or see her in her strength, the result, on her end, was likely exactly the same.

That moment taught me, wholeheartedly, that taking away the world’s pain could be considered a selfish act.

We tend to identify with our own resilience. But ripping away other people’s opportunity to meet themselves in the light of their own resilience is what it really looks like to try to carry someone else’s pain. One, it only hurts us more as empaths, and two, it doesn’t actually work.

Handing someone back their pain, with the faithful intent that they carry it for themselves in order to transform it into a new birthplace deep within themselves, is strangely the least selfish thing I could think of during the remaining of her warrior-style labor.

Every mountain I’ve climbed in the territories marked by the tragedies of the human condition have led me to the peak of a another mountain I never wanted to climb. But at the same time, these climbs presented me with the sun and always left me with one thing: a greater view of myself, and a recognition of the soul’s tenacity to trudge through darkness. A reward for the soul’s resilience to trudge for so long, it should’ve stopped believing in the light, but didn’t.

They left me with truth.

Truth is the only gain worth pursuing, and it’s our pain that turns on the flashlight to walk down the alley of darkness, or the highway of light. But without our pain, we wouldn’t turn on our flashlight to find the thing we’ve been looking for all along—ourselves.

Yes, of course, a part of me wants to take away the pain of every wounded soul I encounter, but a larger part of me (a part that took me years to expand into) understands that we’ve all been that wounded soul at times, and it has been our wounds that have weaved themselves into the bedrock of our being to lead us to one thing: gain.

After 32 years on Earth, a world I once severely mistrusted, I’ve gained more from every one of my pains than I did from any of my pleasures. Maybe it’s the masochist in me, but maybe, it’s a shared truth.