For the Women Who are Fed Up with the Gods of Beauty.

I’m not usually shy about sharing my writing.

Poetry, essays, short stories—it doesn’t matter. I’m proud of what I create, and if I think it might have a positive impact on anyone else, I share it.

This piece was the exception.

I wrote it many months ago, then left it to languish in my notebook. These words were somehow too personal—too intimate. And so I kept the poem to myself…until just a few weeks back, when a friend pushed me to share it at a wonderful creative event in Cape Town, South Africa, where I was performing some of my other poetry.

It was untitled, and rough around the edges, but it was time for it to come out into the world.

Afterward, several women in the audience came up to ask me where they could read the poem online. And so, here it is written down. I hope it may be healing to read, as it was to perform.

Strip Down: A Poem for Women Who are Fed Up with the Gods of Beauty

First, they wanted the hair on my legs.
The girls at summer camp talked so much about shaving
that I started to look at my own legs with embarrassment.

The gods of beauty are more demanding than they’ve ever been—
Strip down to your skin, and give it to them.

Then, they wanted the hair under my arms
and between my eyebrows.
No sooner had it begun to sprout under my arms than my mother said,
“You’ll have to start shaving that soon.”

And my eyebrows?
Perfect arches were never found in nature;
Those are man-made.

The gods of beauty are more voracious than they’ve ever been—
Strip down to your skin, and give it to them.

Next, they called for my hair “down there.”
It was no longer enough to be a woman;
We had to remain girls, too.
Grown men had never seen a woman with her bush intact—
Now, don’t you think that’s sad?

The gods of beauty are hungry, and hungrier still—
Strip down, strip down, and let them eat their fill.

And they don’t just want our hair down there,
and on our legs,
and under our arms,
and between our eyebrows…
Oh, no, did you think it stopped there?

The gods of beauty are more demanding than they’ve ever been.
They want:

The curve between our thighs and the dimples in our hips;
The corners of our eyes and the hair above our lips;
They want the strength in our wombs and the softness of our tears;
They’ll take the magic in our moontimes and the gentleness we wear.

And when we have scraped ourselves down to nothing more than shadows…maybe then the gods of beauty will die too. 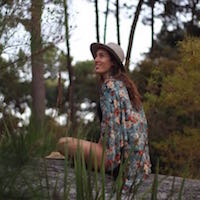