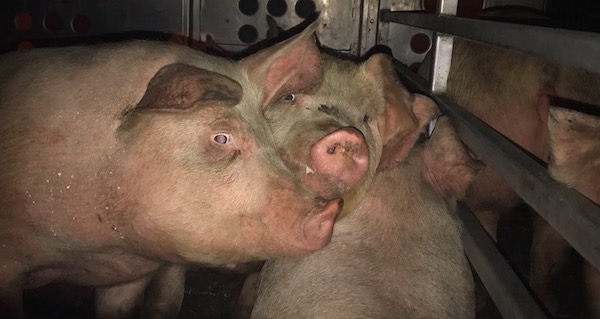 Late at night, on Monday, February 27th, I attended a pig vigil hosted by Los Angeles Animal Save.

Over 100 activists gathered outside Farmer John slaughterhouse in Vernon (an industrial area of Los Angeles) and approached the transport trucks as they stopped outside the gate before entering the facility.

Pigs were crammed together in their own waste, with scratches and wounds on their bodies, their eyes wide and fearful. A strong chemical smell permeated the air, something like ammonia and bleach.

The purpose of the vigils is to bear witness to the plight of the pigs and take photos and videos to expose their miserable situation to the public.

Activists also give the extremely thirsty pigs water through the portholes. It’s a chance to show them a bit of compassion before they are brutally killed. Filling the trucks are around 180 six-month-old pigs, whose growth has been stimulated with hormones and antibiotics so that humans can consume their tortured flesh (heart disease and cancer-causing processed pork). These pigs travel for hours and hours in urine and feces and are given no food or water.

The night of the vigil, I arrived at a quarter to 11 and parked my car at a gas station near Farmer John. As I crossed the street, I stared at the colorful paintings on the outside of the building—content pigs relaxing in an expansive, green field with smiling children and friendly-looking farmers—and shook my head at the deception. Images like these make consumers think food animals live peaceful lives at the hands of compassionate farmers.

But what occurs beyond those painted walls is a complete nightmare.

The reality is that these pigs don’t see sunlight until they are prodded into the transport trucks, and then only see glimpses of light through the holes on their journey to a violent death.

About 20 minutes after I had been standing on the sidewalk, the first truck came around the corner. My stomach felt tense. I’d been anxious all day about this event. I considered backing out to protect my emotions. But I realized that this was not about me. It was about the pigs and how they deserve for us to show up and bear witness to their tragic plight.

They deserve to have their story told. 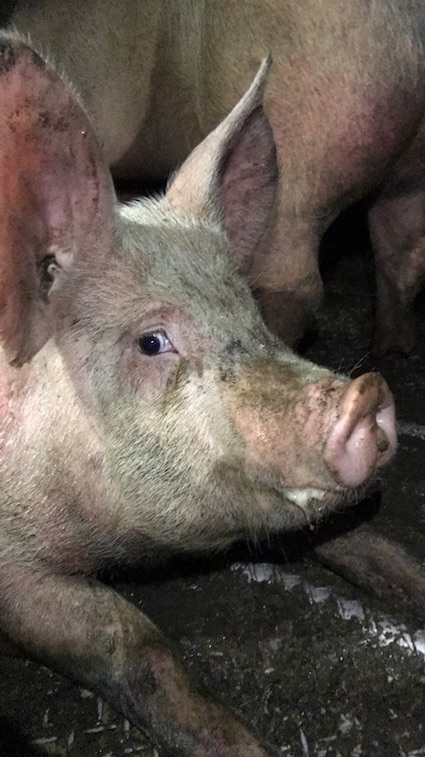 I believe everyone should have the opportunity to tell their story if they choose to. But animals do not possess the language to share their experience. We must do it for them. What does it mean to tell the story of non-human beings? Of the nameless cargo being transported to a brutal end?

None of us present there that night ever has to endure the torture these innocent beings are born into. That night, we would go home to our warm, safe beds. But when I arrived home later, I couldn’t fall asleep. Images of the pigs’ fearful eyes and their bodies crammed inside the dark, filthy trucks were fixed in my mind.

They should be able to feel grass and sunshine and peace.

Yet they have never known any kindness. 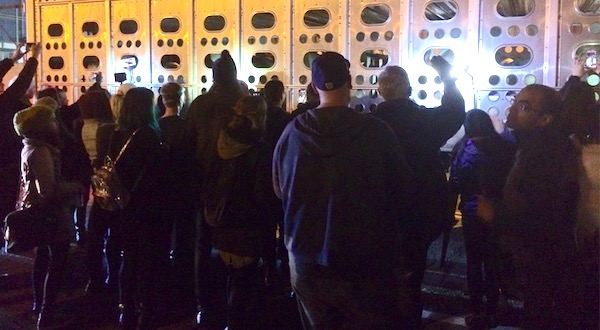 And so, when the trucks arrived, we moved forward to “greet” them before their deaths. We swallowed our nerves and our apprehension and approached the portholes to speak lovingly to them. There were murmurs of: This is so unfair. Poor babies. We’re so sorry. We love you.

They had gone an entire day without water. A handful of activists carried water containers on their backs with long hoses to reach inside the trucks. Many others held water bottles up to the holes until a pig latched on and gulped it down. 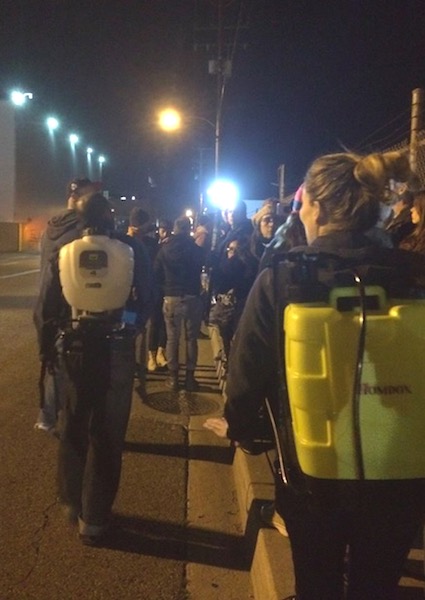 Between the arrival of trucks, we stayed on the sidewalk, our eyes sad, some filled with tears. Many of us chatted with each other to pass the time, connecting with others who cared enough about a bunch of pigs to be out there—late at night, in the cold, breaking our own hearts to show them some respect and to expose their nightmare. There were even a few activists with handfuls of flowers to honor the lives of these pigs.

I wished I could have busted open those trucks and saved them all.

And these were just the trucks we witnessed that night at this one pork facility, this singular location out of so many. In certain areas in the winter, pigs in transport are exposed to such cold temperatures that some freeze inside the trucks. In high summer temperatures, some die of dehydration and heat exhaustion.

Seeing the pigs in the trucks felt as if someone had reached inside my chest and strangled my heart. What was perhaps even more affecting, however, was the vision of the empty trucks exiting the gate of the facility with nothing but leftover squalor, and to know that all the trembling beings that had been inside were now waiting in line for a gruesome death.

So why did I subject myself to this? Why provide pigs water and comfort when they’re about to die?

Because it’s the least we humans can do. To show up and say: We see you. We are sorry what our species does to yours. We will tell your story.

And we will tell it—the group of us out there in jackets and hats until one in the morning with our camera phones posting photos and videos to social media for the public to see.

Someone called out, “Your bacon had a mom.”

While pigs are only a meal to so many humans, I believe they are deserving of respect like the companion animals we share our homes with. To exploit these sensitive, innocent beings to satisfy tastebuds is cruel and unnecessary.

Next time you think about ordering a hot dog, consider the plight of the pig behind the meal and know that he or she wanted to live just as much as you do.