The Surprising Origins of your Favorite Easter Traditions. 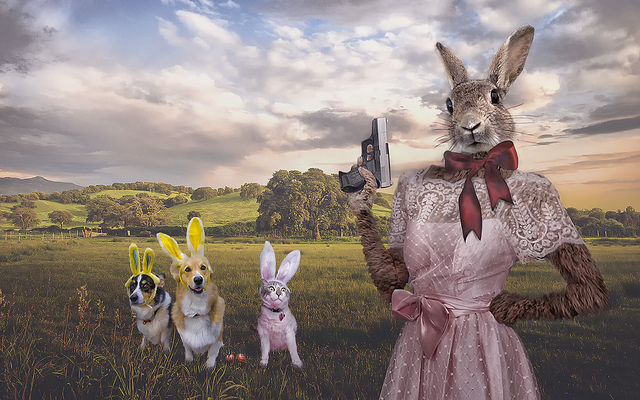 Years ago, I used to wonder what chocolate bunnies, eggs, and flowers had to do with Easter Sunday and the resurrection of Jesus.

And why on earth does Easter change days?

How does Jesus sometimes resurrect on a Sunday in March, and then turn around and show up in April of the following year?

I knew Easter was one of two days we were forced into sitting through mass, with the other being Christmas Eve, so I learned that Easter was the day that Jesus came back to life after his crucifixion. I recall thinking that this was a little far-fetched, because people couldn’t come back to life—I knew at an early age that they couldn’t mean that literally.

So why all the hype, and why the Easter baskets?

For me, Easter was morning mass attended in shiny, new clothes complete with frilly hats, gloves, pastels, and patent-leather Mary Janes. It was Easter baskets filled with eggs and treats, egg-dyeing, and family dinner with all of our favorite dishes. I hated the clothes, the church, and the Peeps—I just wanted the jelly beans and eggs.

I would wonder: What does this all have to do with Jesus coming back to life after the bad guys killed him?

I now understand that this was the ancient part of my soul whispering to me. The part that subliminally remembered the the old ways—the pre-Christian, pagan practices of our ancestors.

Yes, dear readers, I wrote about our Christmas traditions that flower from pagan roots, and now I bring you the Easter ones (or as I should say, Ostara or Eostre, as it was known in Saxon Britain and Germanic Europe). Easter is one more holiday that Christianity so kindly integrated with pagan feast days, so that the “heretics” would obligingly convert and assimilate a bit more readily (when threatened with being burned at the stake as their other alternative).

When I learned that Easter is directly tied to the cycles of the moon, I was dumbfounded. I thought to myself, “Jesus brought himself back to life just for the full moon? Isn’t that ironic. And not any full moon, but specifically the first full moon after the Vernal Equinox. Right-o, then, that isn’t pagan at all.” As soon as I gave this information the slightest consideration, I was blown away at this facet of Christianity—that people were taking information at face value, with no deeper consideration.

Next, let us discuss the name, Easter.

Ostara, or Oestre, was the pagan Goddess of Light in pre-Christian Britain and Europe. Her name is related to the Germanic words for “east” and “glory,” and where does the sun rise but the east, the direction of light. Her feast day was celebrated on the Vernal Equinox, the day that the sun lines up with the equator, making for equal periods of night and day on Earth. The sun rises and sets on the equator, officially starting the summer half of the year in the Northern Hemisphere. There is evidence of this celebration in many ancient and indigenous cultures.

Third, I would like to talk about the eggs that I mentioned earlier.

As I pondered at a young age, they had nothing to do with Jesus after all! As Ostara was a celebration of light, fertility, rebirth, and growth, and the egg has been a symbol of fertility and birth in many ancient cultures, it’s natural it would make an appearance for Ostara. The painting and hiding of the eggs was a pagan tradition of fun for the children, as they were told the painted eggs were laid by the Ostara Hare, (a.k.a. the ancestor of the modern day Easter Bunny).

Which brings me to the fourth tradition—the notorious Easter Bunny.

Who doesn’t recall being dragged to the local mall for horrible pictures with a giant—and frightening if I may—white bunny. In my first childhood Easter Bunny picture, I am in tears, because I was thinking, “What the f*ck. I do not want this creepy thing holding me.” I remember it like yesterday, and haven’t forgotten my terror.

All childhood trauma aside though, the Ostara Hare came about because it too, being a rabbit, was known for its ability to reproduce. We’ve all heard the phrase, “F*ck like rabbits.”  And as a matter of fact, the hares that inspired the fertility attribute are notorious for their ability to become pregnant with a new litter while they are already carrying a pregnancy. Wild, right? Like a wild hare.

Last, I come to the thing that most surprised even me. The tradition of brand new Easter clothes is rooted in pagan tradition.

The new clothes were a representation of hope and renewal, as well as invoking good luck for the coming year. Remember, before the Gregorian calendar came into being, the world functioned according to the lunar cycles (which is why the Chinese and Lunar New Year both come with the second new moon of our calendar year). Thus the second full moon (Ostara) of the lunar calendar is closer to the new year than it seems according to our Gregorian calendar, so this was a feast day that was historically close to the start of the year, thus the symbolism for ushering in new luck and fortune.

It is because I believe in knowing why I do the things I do that I share this with you. I do not do it to discredit or criticize anyone’s personal beliefs or traditions, but rather to share knowledge about where our traditions come from.

I rest easy in knowing there are others like me who seek to know.

Because knowledge is power, dear readers. It is from knowledge that we can make informed decisions about whether or not traditions are right for us—instead of just blindly following the herd like sheep. Or should I say lambs.

Whatever you choose, be a spreader of light this Easter season.