Why I Felt Guilty & Embarrassed when I Almost went Blind. 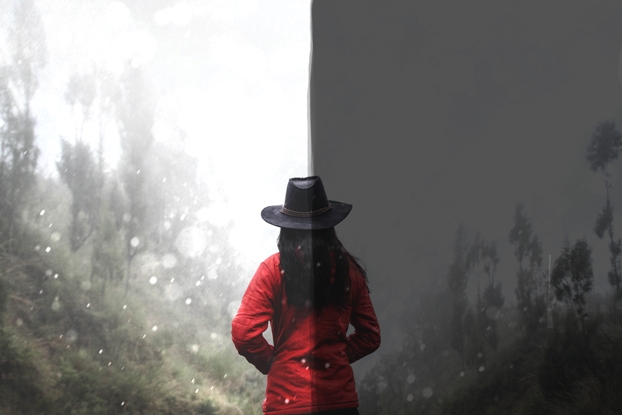 To be honest, I have always been somewhat vainglorious when it comes to my supremely good health.

I relished in the awe and praise of others who pointed to me as the ideal to which they aspired—the healthiest person they knew. My ego knew no bounds.

I have been health conscious—or a “health nut” as I was once called—since my late twenties. I became a vegetarian in the mid-70s and my family nicknamed me “Crunchy Granola.” I started practicing yoga in the 70s as well.

I have never had a chronic illness. So it came as quite a shock when I was diagnosed with a rare eye disease in January 2016. At first, being completely ignorant about the condition, I assumed I would be given some medication and carry on with my busy, active life as usual.

Imagine my surprise when the medication I was given didn’t work, and I learned that I could become permanently blind if the disease wasn’t brought under control. Uveitis is responsible for 25 percent of all the blindness in the world. What I have is called Sarcoid Uveitis, and, in my case, it proved to be extremely difficult to treat.

At first, I told almost no one—just family and a few close friends. I have so many friends and family who have suffered really life-threatening illnesses. And there are so many people (everywhere) battling for their lives from a myriad of diseases. I felt guilty talking about my own illness, even though I was scared to death of the prospect of going blind. I was embarrassed that my excellent health was now questionable.

Even as my vision deteriorated and none of the medications I was prescribed were working, I kept up my cheerful, positive façade on social media and in my everyday dealings with most people. In reality, though, I was starting to experience another unfamiliar condition—depression. I refused to acknowledge this and only in hindsight did I recognize it for what it was.

By the summer, I was no longer able to read books or the newspaper. It eventually became unsafe for me to drive except for short distances where I was familiar with the road and traffic signage. I compensated for reading by listening to books on tape. I read newspapers and magazines online where I could enlarge the print. I didn’t mind not driving and started walking almost everywhere.

By late fall, however, I couldn’t even ride my bicycle. Going for 15 or 20-mile bike rides kept me physically strong and helped me stay connected to nature. At the point at which I couldn’t even do that, my spirit plummeted. But still, I hid my condition from almost everyone.

I started to become reclusive, spending whole days indoors except when I walked my dog—even his walks got shorter. I felt like a whiner and told myself that my condition did not rise to the level of other life-threatening diseases. I also told myself that although I was a little down, I wasn’t depressed. Other people were really sick and other people suffered from depression.

By November, I had been on several medications including very high doses of Prednisone. None of these stopped the disease from progressing. In fact, I developed a secondary condition called macular edema as well as cataracts as a result of those very medications!

Eventually, at my wits end following a visit to the doctor that showed no improvement, I did reach out and start to talk about what I had been going through with friends and acquaintances. And, as I’m sure you can imagine, there was great concern, compassion, and love. No one felt I was being overly dramatic or self-centered for fearing that I might lose my eyesight.

Eventually, a medication was found that stopped the progression of the original disease. However, by spring of this year, my vision had continued to deteriorate from the secondary conditions, and surgery would be required. So I definitely wasn’t doing a happy dance.

Not only had I stopped riding my bicycle, I also stopped going to the gym. I could no longer recognize faces and I was embarrassed at the thought that people at the gym would wonder why I wasn’t speaking to them. I am convinced, and studies show, that exercise lessens depression. Not exercising enhances it.

I had to acknowledge that I wasn’t handling the emotional toll my health issues were taking on my life very well.

A couple of weeks ago, I put my bike on a trainer on my patio, which backs to a wooded area. I can ride outside even though I’m not going anywhere. I also developed a workout routine at home and have started walking several miles every day. My mood has definitely improved.

Spiritually speaking, I suppose you could say that my ego played a huge role in how I responded to my situation. If that’s the case, there should be a spiritual lesson in all of this, right? Through all of it, I have maintained my asana and meditation practice. Indeed, and again in hindsight, I do feel these practices helped me to ultimately recognize the emotional distress I was essentially causing myself.

Footnote: I have since had had the left eye surgery and the improvement is miraculous.