Why we Didn’t Have Sex this Morning. 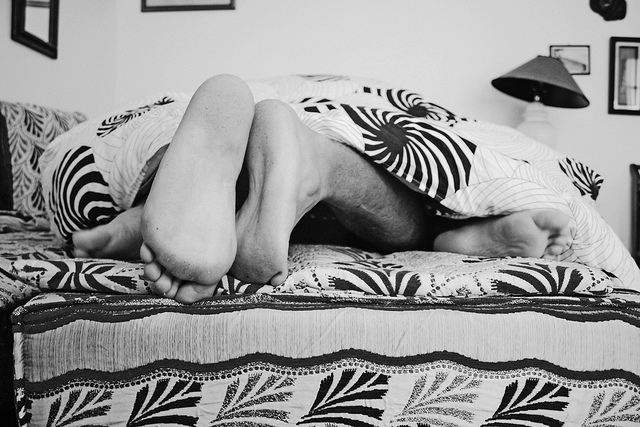 We didn’t have sex this morning, because we were laughing too hard.

We lay there talking about whether or not she could climb up onto a big, black, plastic cube that is used to float docks. I should have been chivalrous, but I kept seeing images of her unable to launch herself from the water onto this handle-less monstrosity.

“Superman couldn’t do it in his prime,” I said.

“I used to eat paste in school,” she said.

I was relieved at her use of the past tense.

Then we had sex.

Humorless sex is only barely worth having, because it may turn into humor-full sex—and having sex with a furrowed brow and a frown is still probably better than no sex at all.

There are good reasons for not having sex…like, because the house is on fire, and you are in it. Or if Johnny Depp is coming over for breakfast at 8:00 and you haven’t given any thought to what you will serve him—and it is already 7:49, and you haven’t brushed your teeth yet. But in that case, you could still have a quickie.

At this moment, those are the only two reasons I can come up with for not having sex.

If you must give a reason for not having sex, make it a doozy.

Don’t use the headache excuse, or say, “I just don’t love my spouse anymore.” And never, ever pass up the chance to have sex because of the kids. You will end up hating them, and they will be resigned to years of therapy.

If you are looking for an excuse not to have sex—then stop, turn your boat around, and start floating downstream toward all the reasons to have sex.

This morning is the first time I have ever had sex with a confessed paste eater. Sure, I could have used eating paste (or the fact that she said she used to chew on pencil lead) against her. But speaking frankly, I would much rather be inside her and let the details of her elementary school exploits work themselves out over time.

Oh wait—she didn’t say that it was in elementary school. You don’t suppose she was still chewing lead and eating paste in high school or college do you?

Well, I guess that would be okay too, but it does give me pause.

When it comes to sex time, don’t hold what they have done in the past against them (or what they might do in the future).

Most people I know have a butthole. I actually don’t know that from asking them—but I googled it and confirmed that they do. They also have moles in places you wouldn’t believe, dubious-smelling belly buttons, and other body parts lurking like Russian submarines under the surface of an otherwise pretty face and witty conversation.

It can be embarrassing to have a body, to visit the toilet, to fart audibly, or to realize that all the anti-aging creams in the world won’t keep you looking like Shirley Temple in her first movie. It’s also embarrassing to see stars and starlets going under the knife to look like they used to when they were younger.

I’m not going to mention any names here, but while I used to pray Goldie Hawn would sneak into my bedroom at night, now I lie sleepless, afraid that she is waiting to jump out of my closet scaring me half to death. I am scared because nobody belongs in my closet—other than perhaps the cat—and because I don’t even recognize Goldie anymore.

Getting on with better and better sex positively requires that we all flaunt our physical peculiarities, rather than trying to hide them. If you have a big butt, get a t-shirt with an arrow pointing down on the back of it and wear it proudly.

If you have a paunch, put a magic-marker, jack-o-lantern face on it—and when you sexily raise your shirt, say “Boo.” Instantly, your lover will either run away or appreciate your sense of humor. And either way, you still have the permanent-marker picture on your belly that will appear backward in the mirror.

Rumor has it that George Bernard Shaw was still having great sex at 101 years old. So, there is still time for me and you to write books and have fine sex. If you would pass that rumor around, I would appreciate it—because I just started it, and I would be totally thrilled to have some stranger, friend, or kid at the supermarket yank at my shirt sleeve and whisper, “George had sex when he was over 100 years old.”

But really, my point here isn’t funny. It is that you—just the way you are—are the absolute sexiest you are ever likely to be, so you might as well go for it. You are hot. In fact, if you got any hotter, you would have to carry around a fire extinguisher.

If you can’t tap into your hotness, then by all means—find someone who can. And once they have, then warm your cockles, heart, and genitals by the hearth of your sexual heat.

I’ve heard rumors that after we die we are likely to have less sex. I know that there are some couples who think that isn’t possible, and to them I say, “What are we waiting for?”

Sex is for the living—so, reach down, grab your own wrist, and if there is a pulse, then it’s time for sex. Heck, hedge your bets, start having more sex now—and if there is sex after you die, you will have a head start. But if there isn’t sex after death, then it is worth having some before breakfast, after lunch, and on both sides of dinner.

Whether there will be sex in heaven or not, you don’t have to wait until you are there to have heavenly sex. Don’t let earthly concerns get in your way—and above all, remember that good-humored sex is the best sex there is.

If you find yourself getting overly serious about sex, dodge that bullet and get on with physical pleasure while you are still corporal enough to enjoy it.