10 Times the “Liberal Redneck” said what we were All Thinking. 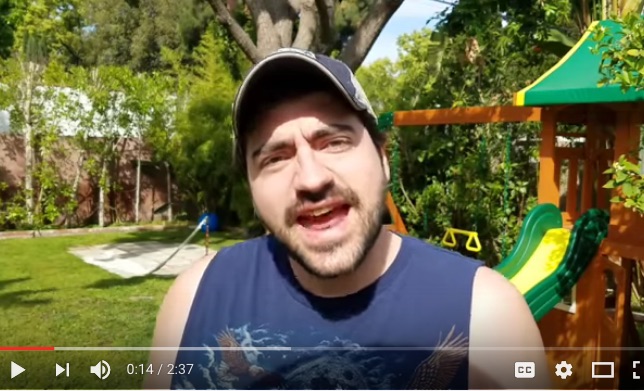 If you’re not yet familiar with Trae Crowder, the “Liberal Redneck,” you’re in for a treat.

He’s a comedian, co-host of the wellRED podcast, and co-author of The Liberal Redneck Manifesto.

Crowder tells it like it is, but he distinguishes himself from the quintessential redneck by giving us straight-shooting, profanity-laced talks on the political problems of the day from a liberal viewpoint.

While the humor is a welcome relief, the Liberal Redneck gives it to us straight: There are things going on in our country that are deeply disturbing to most of us. We can take solace in the fact that we are not alone in our frustrations or in our concerns.

Others are speaking up, sometimes from the most unlikely places. Let’s add our voices to the noise and be the change.

Here are 10 times he said exactly what most of us are thinking:

On the Conservative View of Liberals: “They hate us more than they love our country.”

On Trump’s Scandals: “In the past week, Donald Trump has had more scandals than Obama had in eight years. And every time I read about one, I wonder, ‘Is this it? Is this the straw that breaks the elephant’s back?’ The thing that makes Republican leaders like McCain take action. And it never is.”

On Equal Pay: “Men justify the women taking care of the kids and the house and holding down a job because, after all, men are the primary breadwinners in the family. But that’s because we f*cking pay women less! Men claiming superiority over women because men make more money than they do is like claiming you’re stronger than a lion that you tranquilized and put in a cage. Sure, you’re in a better spot now—but how ’bout you unchain the beast and see what happens?”

On the First Amendment: “No one shall give a damn about your religion. Freedom of speech doesn’t mean you can say whatever you want about prayer and God and rules and gays, and everyone else has to take it. It means you can say whatever you want about all that, but I can then say back to you, ‘Your church is a cult, and all the women in it are fat.’ So suck it up, Brother Daryl.”

On Gun Control:“A ‘well-regulated militia’ means regulated by the government. We don’t need anyone to have machine guns. We can wait a little while on a background check (but if you’re white with a bowl cut, then you have to go to the back of the line, Preston). Support prudent legislation designed to keep other guns away from the mentally ill and criminal elements. If you’re paranoid that all these laws are designed to take away your gun, then we’re going to assume you’re mentally ill or criminal. But now let’s be clear: guns rock. Hunting is awesome. Keep your guns. But, like, we gotta regulate ’em, y’all. We have to.”

On Confederate Monuments: “So, yes, we fought a war for slavery, and because sometimes the universe gets some sh*t right (waterfalls, potatoes, Scarlett Johansson), we lost. Which is another thing we apparently need to remind some of our fellow Southerners of. Not only did we fight a war for slavery, but we got our asses whupped. Until we can all agree to accept this and act accordingly, we’re never going to be able to move on. It’s nothing to be proud of, y’all—it really ain’t. We fought and we lost. But our defeat was a great victory for morality and for the country as a whole. Southerners tend to act as if the Civil War isn’t history but a scientific theory whose results can be disproven if discussed enough. It’s not. We lost. Get over it.”

“How many people in the South could stomach the idea of Nazi statues existing in Germany in order to ‘honor the past’ but, ‘not meant to offend the Jews, of course.’ Because y’all do realize that’s what most of these Civil War monuments are, right?”

On the War on Drugs: “The government shall not ‘crack down’ on drug crime while taking kickbacks from industries and companies perpetuating addiction and abuse. You can’t fight wars on drugs—only on people. The drug war kills people, not drugs. Anytime you hear a politician talk about being tough on drugs but then say nothing about pharmaceutical companies, doctors, or insurance providers needing reform as well, you call them what they are: hacks. And hit them in the face—we mean, vote against them.”

On Trumpcare: “It is so profoundly terrible that even most Republicans hate it. This is the sh*tty Independence Day sequel to healthcare law.”

On the Muslim Ban:“He banned Muslims. To be more exact, he banned Muslims from a very specific list of countries, none of which pose any real or immediate threat while leaving known producers of terrorists like Saudi Arabia, Pakistan, Lebanon off the…On my side, we understand that we are not as groups of people defined by the worst among us.”