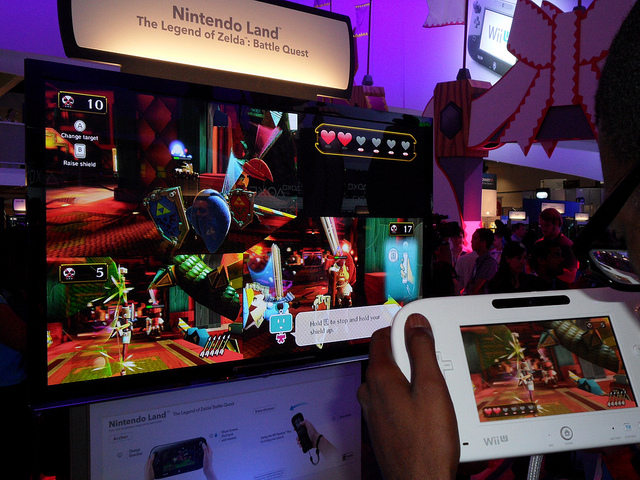 As gamers from around the globe pack their backpacks for the annual pilgrimage to their Los Angeles mecca, this video games expo is set to be the largest gathering yet.

This year, an estimated 15,000 noobs, spammers, and shooters will attend the event beginning June 13th—and they won’t be disappointed.

All the big players will be there to showcase their latest gizmos and graphical capabilities.

Hot on the heels of its Legend of Zelda: Breath of the Wild video game (launched in 2016), Nintendo now boasts that its new Switch console is the company’s fastest-selling device to date.

Not to be outdone, Microsoft is set to unveil its code-named “Project Scorpio” gaming wizardry before the end of the year. It’s expected to be more expensive than Sony’s PS4 Pro, but should still give Microsoft a credible and competitive edge.

When video game players don their VR headsets to inhabit fantastical landscapes or face off on VR battlefields—what the heck is going on?

Well, just about anything imaginable, really.

We’re talking adrenaline-pumping, hyper-stimulating, real-time responses to the immersive scene the player is engaged in—often with several other players (“opponents” or “friends”) from anywhere in the world.

As noted in The Washington Post’s “The Screen Age” column:

“Every movement, every shot fired, every victory within the game is accompanied by real-life physical and neurological responses: The gamer’s muscles tighten, the pulse pounds, and the brain’s prefrontal cortex—its pleasure center—is activated.”

And so, a new Internet Gaming Disorder is emerging in our midst. This is a modern malaise that is eminently deserving of our attention, whether we are parents or not.

From where I stand, I believe a little inventory on the amount and type of cyberspace activity we immerse ourselves in is something we owe ourselves—not just in terms of personal and spiritual growth, but in terms of authentic relationships with the natural, human community we are a part of.

In my new book, Do It Anyway: Deep Spirituality Meets Real Life, I reflect on our modern-day dilemma:

“…although we are socially connected through multiple social networks on the internet and have instant access to information, we are simultaneously disconnected.

Overidentification with and addiction to our virtual cyber world can lead to severe isolation and loneliness. Enslavement to our digital devices and pixelated reality is energy depleting and disorienting. We negate the spiritual essence of who we truly are. We are so overstimulated by the barrage of information tumbling at us that the natural inclination to rest in quiet, in nature, and in meditation is severely compromised.

Noise, busyness, restlessness, overstimulation, and distraction are the hallmarks of the urbanized and socially isolated world we have created for ourselves. Facebook, Twitter, Instagram, and Pinterest won’t cut it. We need nourishing, meaningful, and compassion-filled companionship in our lives, in real time with real people.

More importantly, we need to recognize our moments of existential loneliness and anguish for what they are: the necessary moments of spiritual centering that, if we can subdue the compulsion to fill them with more techno gadgetry, will make all the difference in the world. When this spiritual awakening is lacking, it is because we are pandering to a disintegrated human community that has technologically stripped us of our capacity to be alone.”

As noted earlier, it is the young and most impressionable among us for whom we need to be most vigilant and protective.

As I note in the same chapter:

“Too many children today are nature deprived because their playground is the pixelated screen of a tablet. I want my kids to grow up knowing and savoring the wildness, biodiversity, and rich abundance of the natural world. When the artificiality of computer gaming supplants the wonders of nature, we have compromised our innate curiosity and turned off the intuitive wisdom we share with the earth. By insulating ourselves in virtual cyber communities, we lose all sense of what it means to be contingent, finite, and interdependent beings.

I believe artificial intelligence is an unstoppable, rapidly expanding science. Tons of money and resources are being invested into it daily. I’m not going to bury my head in the sand and deny this. Nor do I want to. We are endowed with prodigious intellectual gifts and creative potential. We need to use these gifts in the service of true human dignity, equality, and flourishing. Unchecked artificial intelligence can lead to self-indulgence, narcissism, and isolation if it is not used thoughtfully to deepen the spiritual communion of humankind with the whole created order.”

Gaming—and its access through consoles, smartphones, PCs, and tablets—is not going away any time soon. Nor am I advocating this.

My appeal is to the designers and psychological consultants behind their creation—that they would consider refining some of their latest video games in ways that promote, rather than devastatingly hijack, the most vulnerable of human sensibilities.