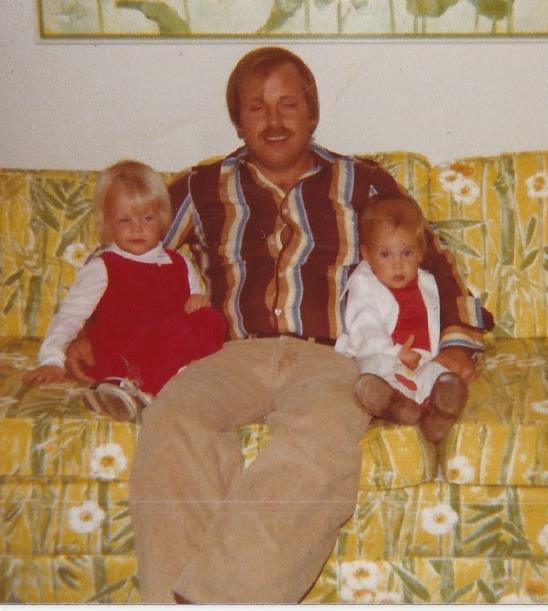 When I was a little girl, I wished for a lot of things.

For the clock to move faster in grade school, Mike McKee to profess his love for me, and most importantly, a dad who was around a bit more.

I know that a lot of us didn’t have the family of our dreams—that the so called “normal” family is convoluted and contrived—but once upon a time there was a little girl who only knew this longing in her heart.

My dad was, and still is, a carnival man. He was on the road most of my childhood and would weave in and out of our lives between fairs. He would return bringing treats and toys, and usually a godawful outfit that was either too big or too small for me.

Our home was far from perfect. My parents did their best, but given what they were armed with coming into the union, their best was a bit wrecked. My dad was in his early 20s with a young company, two daughters, and a marriage.

He was still a boy, trying the best he could to be the man he was expected to be.

Having short spurts of time with us, he often took the role of being the “fun one” whooshing in and out of our lives with charisma, humor, and coke floats. His signature game was named “Poison River,” where my sister and I would huddle on my parents queen bed and he would slither around the floor like an alligator, trying to catch us by surprise to drag us off the bed into the dreaded waters.

He would also prank us by turning out the main power in our old Victorian house. This was usually after watching a scary movie, and it would end up in outright hysteria. He thought it was hilarious. He was the jokester, the life of the party—until he wasn’t.

By the time adolescence came around, I started to see things differently. I no longer vied for his attention; I was pissed off and hormonal. Long gone were the days of reading Lawrence Sanders books to mimic him. Quite the opposite actually—my judgement, mixed up with my parent’s divorce and him being absent so much, was a trainwreck.

He tried to reel me back in, but I was too far gone.

In the 25 years since, I’ve learned a lot. About me. About him. And about how life isn’t what Disney promised us. And that that’s okay, because it was never supposed to be.

Here are the three things I’ve learned about the reality of fatherhood:

1. I take responsibility for my own story.

I have spent years working through my own story—with lots of therapy, self-help books, nature, and yoga. I had to spend time feeling the emotions I spent all those years suppressing. To truly feel my disappointment, my anger, and my hurt brought me a deeper understanding of myself and allowed me the freedom to start to heal.

Releasing my pain lent to releasing my projections and expectations. I began to ask myself different questions: What is my truth about my dad? If I turned up the volume on the good things about him, what do I hear? How has he contributed to my life and the woman that I am today?

My witness to his life is so different as a result. Through this work on myself, and as a I grew into a woman, I have returned to that little girl’s vantage point and feel a lot admiration for the man I know as Dad.

We all have our own story. He has climbed his own mountains. It’s his journey and maybe, just maybe, I got it wrong. Or maybe I got it right but I didn’t fill in all the pieces. Here’s what I do know: He is a man that, at one time, gave up his dream of being a newscaster and joined a carnival to fulfill the expectations and duties of being a husband and father.

He is a man who maintained his optimism and humor in life, a man who worked very hard to never burn a bridge or break his word.

He hasn’t lived a life of glamour, or had the love of his life, or even the affection of his own children at times, but he stayed in the game.

A few years ago, on a trip to Mexico, he put himself on the line on the karaoke stage. Person after person got on that stage and sung their monotone hearts out. Waiting, my palms were sweaty. My sister and I kept stealing nervous looks at one another. Finally, they called his number and he sauntered out onto the stage with my daughter in tow as his back up dancer.

He sang “Land of 1000 Dances” and nailed it—blew it out of the water! And I knew, after seeing his stage presence, that he would have been a damn fine news anchor.

There is so much I love about my father now.

It’s every moment he has shown up for us, providing everything he could offer.

It’s the fact that he adopted my half-sister because her dad was a jerk.

It’s how, when every other person in my life judged me for having a baby out of wedlock, he cried out in elation that he was going to be a grandfather.

It’s how he drove 18 hours straight to meet my little girl on the day she was born.

It’s how he made me foot my own college bill, telling me instead, “If there is ever a situation in your life that you will miss an opportunity to move forward, I will help you then.” Fifteen years later, he honoured that when I had the chance to buy the house of my dreams.

His heart is gold, his love is strong, and he is always doing the best he can.