Standing Rock is Not Finished Teaching us Lessons. 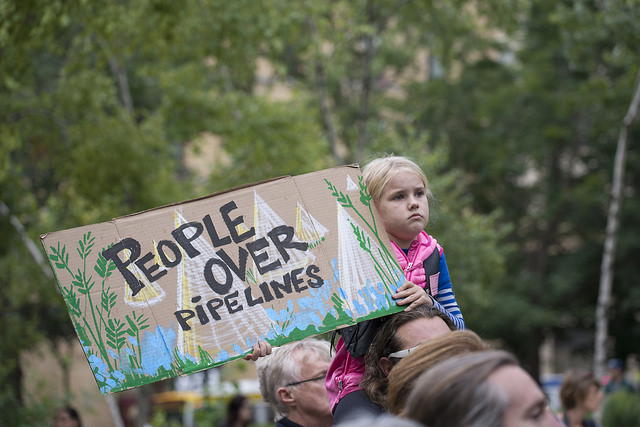 “I’m pleased to announce that the Dakota Access Pipeline…is now officially open for business, a $3.8 billion investment in American infrastructure that was stalled and nobody thought any politician would have the guts to approve that final leg. I just closed my eyes and said ‘do it.'” ~ Donald J. Trump

Now that’s a stretch. When I read this, I immediately had to remind myself to breathe. It’s as if the wind was knocked out of me when I got to that last line: ”I just closed my eyes and said ‘do it.’”

I wanted to drop my head into my hands in defeat. I wondered: Where do we go from here? Is there something to be gained from the events at Standing Rock?

Most of us who followed the Standing Rock saga felt our hearts sink as the tribes were ordered off their land this past February. The completion of the Dakota Access pipeline was a huge loss for the Standing Rock movement.

But recently, on June 14, 2017, the Standing Rock Sioux tribe won a large victory when a federal judge ruled in their favor.

The U.S. Army Corps was ordered to prepare a new study on the risks of the impact of the Dakota Access pipeline, after the current administration hastily pushed it through.

With over 250 pipeline accidents each year across North America, time is of the essence. Until the new study is completed, crude oil continues to flow through the pipeline.

It is “Big Oil” versus the Dakota and Lakota people of the Standing Rock Sioux tribe.

Representatives from more than 200 Indian Nations—termed the “Water Protectors”—gathered at the Sioux Standing Rock reservation in August of 2016. They stood in peaceful protest to halt the construction of the pipeline, all the while being baited—enduring dogs, pepper spray, water cannons, sonic cannons, and rubber bullets.

Social media opened a portal into the entire quandary while mainstream media carefully ignored it.

Thousands of war veterans showed up and allied with the Water Protectors.

So, what was the big deal? Why was the pipeline something so many people actively resisted? It is built simply to serve the oil industry to move oil.

But it is a huge deal.

Pipelines are a menace to the environment. They leak. They contaminate water and destroy ecosystems.

Then there is that elephant in the room—the fact that the human rights of indigenous people are once again at stake. Coupled with this is the historical tyranny aboriginals have suffered through, time and time again.

All of this is overlooked in the pursuit of corporate gain.

You could say this world is at a crucial impasse. Everything seems upside down and there is a great struggle universally to find our way. We are at the fork in the road of knowing better and doing better. This is the gift that Standing Rock offers us all.

“There was a piece of a song I heard the other day, some words I heard this singer say. Something in me love the way it sounded, when he said how he wanted to stand, stand and be counted.” ~ David Crosby & James Raymond 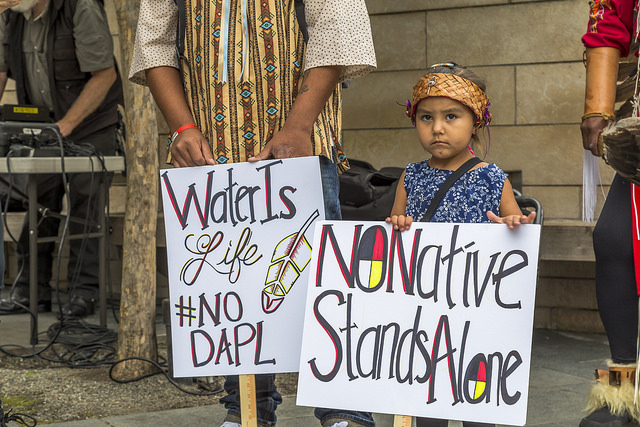 Having a Sense of Reverence for Indigenous People and their Culture.

I lost myself in the conflict at Standing Rock. I was quite attached. Something about the ways of aboriginals speaks to me, so when I had the chance to go to a prayer circle in support of Standing Rock, I was all in.

The circle was lead by an elder. She spoke about the plight of indigenous people, of their struggle throughout history and of the situation at Standing Rock. She carried a stack of papers an inch thick listing missing indigenous woman that had vanished without a trace or concern to the authorities.

100 of us formed two circles and moved in unison to the beat of the drummers at the center. Smudge drifted in the air. A chant was offered up as prayer. The energy was palpable. It was an incredible experience. I had not anticipated feeling so much sadness and shame.

Indigenous people have amassed great wisdom to share with us. Although presently a culture that is broken in parts, once upon a time, they thrived. There is a need in this world to make a place for that again.

They are a people who call the earth mother, the sky father, and regard the animals as teachers. They see the land as sacred, the weather as sacred. Their medicine is in the plants, dirt, trees, and the sun that shines. They embody what it means to really love the earth, what it means to hold her and guard her.

Doing the Right Thing: Investing in the Earth.

Standing Rock is a historic gathering of tribes that amazingly continues to rise. Bless their hearts and courage. Theirs is a mission to protect a water source for millions, and to keep their lands—our lands—defended.

We have a lot to gain from seeing what it looks like to safeguard land and water. What is looks like to stand up to corporations and the challenges that ensue as a result.

To survive, we all need the same things: clean air, clean drinking water, food, and an environment that is sustainable.

Sometimes, it is overwhelming to recognize every cause out there. It feels like everyone wants a donation for something. The thing is though, that with the blessing of being born in the free world, it is not an option for us to be compliant. The planet and every being thereafter is dependent on our present choices.

Investments of all kinds move mountains. There are petitions, organizations, and lawyers who are all in the business of fighting for the earth. Find ones that represent what you believe in. Give time, give money, give whatever you can.

Healing the Planet by Starting with Self.

Healing the planet is interconnected with our individual journeys.

Working on our own emotional issues—in particular, understanding how to process anger, fear, sadness, shame, and aggression—is a significant key to making a shift in our global energy.

Yoga, exercise, body work, and therapy are all things we can do to help move energy in our bodies. Releasing energy assists us in being present and self-aware.

Learning to be accountable to ourselves naturally lends to us being more accountable to other people and the environment. Our actions, when we live consciously, take on greater significance and we exist from a place of seeing the whole picture, not just ourselves.

“I had assumed that the earth, the spirit of the earth, noticed exceptions—those who wantonly damage it, and those who do not. But the earth is wise. It has given itself unto the keeping of all, and all are therefore accountable.” ~ Alice Walker

Standing Rock represents both the good and the depravity in our world.

It is the momentum of watching people amass to stand up for what they believe is right and just. It is the expanse of money and the witness to what that can buy. It is the powerful evidence of our connection to Mother Earth and the environmental implications of our current decisions.

And above all things, it is a choice—a choice to do better, because we know better.