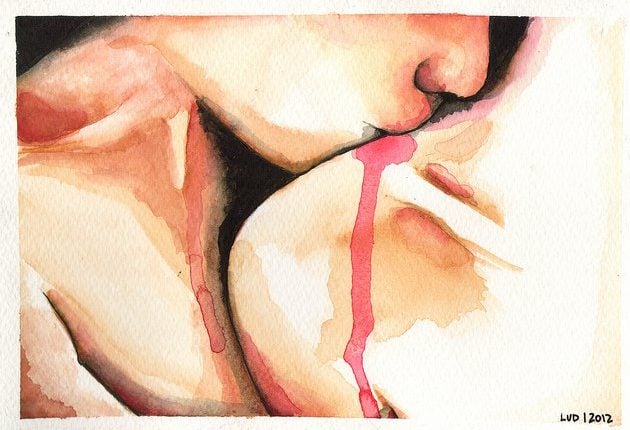 We have been at the lake house for a few weeks.

And while we sail a lot, canoe even more, hike, hug, chat, swim, nibble each other, and keep the lake company, there is one not-so-sweet part about being here.

While there aren’t mosquitoes or ticks in the numbers that I suffered through in Wisconsin previously, there are some flesh-eating characters who leave us peppered with various-sized bites. We don’t see the little buggers, but we are left itching, sometimes cussing, and feeling gnawed upon.

Up until last night, we felt quite helpless in regards to these bites or stings.

Insects probably have the largest biomass of any terrestrial animals. At any time, it is estimated that there are 10 quintillion insects on Earth. This is a buggy planet.

There had to be some way to turn the the overreaching bug infestation into a positive for us, and I have found it. This new sexual technique will turn a previously problematic bite or sting into a sexual, sensory, inspiring pleasure aide.

While the bites seem intrusive and problematic, they are actually a blessing in disguise. My sweetie had a particularly bright red bump on her right rib cage. It drove her wild scratching. I reached over and pressed my right index finger on the red, puffy spot, and she made a purring sound that I have only heard from her when having sex.

Putting one and one together, within minutes, we were having sex, and I would occasionally press on or scratch that terribly sensitive bug bite.

Sometimes, it seems like a bit of work to make sure that both of us orgasm—but all it takes is a ripe bug bite, and suddenly sex is wildly fun, unpredictable, and hot. That bug bite was like an orgasm button.

I didn’t overdo it, but I didn’t take it for granted either.

If we can figure out what sort of bug or spider is making these bites, I might market it to people who are ready for an enhanced sexual experience.

This might be a sexual aid too. It wasn’t until my mid-40s that I developed an allergic appreciation for poison ivy and the thrill of scratching a little (or large) inflamed area. I wonder if just a practically homeopathic piece of leaf, kept in a vile around my neck, might—when applied just so to butt, belly, or back—offer a touching, scratching, rubbing point during particularly hot sex.

Warning: This idea hasn’t evolved past the curiosity phase yet, so I can’t tell you whether it is truly pleasurable or even works. But I can tell you that before I do it, I will clear it with a doctor friend of mine. While we don’t want poison ivy to go systemic, infecting our whole body as it can—we might as well search for ways that pleasure (especially sexual pleasure) can go systemic, turning us on from head to toe.

If the FBI were to pull a quiet, late-night raid and dust me down, they would find her fingerprints all over me.

All night long, we touch. She reaches a long, freckled tentacle my direction, either pulling me to her or her to me. I do the same, always touching. Touching without preference for where, but a deep, primal longing to be near each other.

In the day, there are mental meters for touching—but at night, the deepest parts of each of us come out to play (and play they do!). They offer clues to the deeper aspects of ourselves—the wild, nocturnal, unconscious id desires that offer a steady foundation for relentless relating.

These nightly touch fests slide in and out of sleep, They don’t often lead to sex, so they aren’t foreplay. Instead, they are confirmation of our unlimited desire for each other.

While it can be fun to have a twin or double bed and be forced to sleep near each other, it is much sexier to have a California King—the biggest production mattress there is—and use only a tiny part of the acreage of it.

With a bit of Puritan planning and total lack of impropriety, it is possible to divide the wide-open spaces of a big bed into weekly chunks with virtual fences of desire, so that you don’t have to wash the sheets until you’ve cuddled closely on every nook and cranny, which can take quite a while.

Never have sex when you experience feeling obliged to do so. I’m not saying, “Don’t have sex,” I am saying nudge obligation in the direction of becoming an endangered species—and know that when it becomes extinct, you will finally be free to have way more sex, while freeing the sex-slave aspects of anti-Shakerism in you.

The Shakers, by the way, are a fleet of believers so sincere about celibacy that their lack of reproduction and pleasure left them without the need for child care, since without sex, there aren’t many children.

And while, sometimes, we are distracted by a child acting up in a restaurant—or one with our own DNA getting a tattoo of a goat—what we do in order to make a child is too much fun to be an obligation.

Gelato has a higher melting point than ice cream, allowing it to be eaten when it is both warmer and tastier. Raise and lower your own sexual melting point to appreciate a full range of sexual experiences.

In the morning when we wake up.

Early morning finds us touching while I type. It’s nearly time to conduct our morning inventory of each other’s bodies—itching here, rubbing there, and discovering what gifts the bugs left us during the night and how we might use them to make this another sensation-full day.

This mapping of each other’s bodies may lead to sex, or it may not—but there will be no obligation involved, only the unbridled expression of joint pleasure providing us with one more reason to smile, giggle, sparkle, and enjoy each other so fully that it seems we both may pop.