The Specific Qualities of Sibling Grief—How it Morphs & Marks Us. 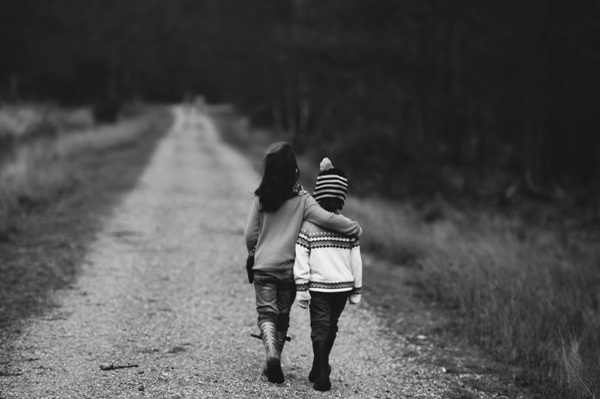 “Mom, Violet’s looking at my yearbook again,” my son whines, walking into the room with a stormy look on his face.

“Mom, Max is being sooooo mean to me!” my daughter huffs a few minutes later, her face crumpling.

It’s been one of those mornings. I’ve lost count of how many times the words, “Please be kind,” has slipped through my lips, as my own voice evolves from soft and patient to a sharp, irritated tone. I even broke out my lame little jingle: Be kind/To one another/To your sister/To your brother/Says your mother.

“I’m about to send you both to your rooms,” I finally threaten. The bickering is persistent and buzzing, a swarm of mosquitoes I keep slapping away, but who keep returning.

Five minutes later, Violet emits a high-pitched cry from the den. My son Max hollers, “Violet!” and darts to her as if she’s trapped in a burning building, and he’s prepared to drag her to safety. He hugs onto her, smoothing her hair as she explains she stubbed her toe.

They argue incessantly. And they love each other fiercely. In other words, they’re typical siblings.

They are two souls who were shuttled to the same family, who share DNA, knit together by my husband and me.

The connection between them is intense and sacred. They drive each other batty, but the relationship they have with each other is theirs alone; and while they might not realize it yet, their bond is something they won’t experience with anyone else, ever.

It’s a connection that I study closely: through it, I see what I lost.

When I was 24, my younger brother Will, my only sibling, died from drugs and alcohol.

After two decades of bellowing, “I’m telling Mom,” at each other, Will and I had finally settled into the beginning of what I assumed would be our adult relationship. We still annoyed each other and were keen to each others’ faults, but we were also friends who shared the same taste in movies and music, who enjoyed the same dark and smutty humor. We spoke in shorthand that can only be spoken with someone who knew what it was like to grow up in our particular family, with our particular parents, godparents, and grandparents.

The person I’d shared my childhood with was gone. The person I’d assumed I’d have another 50 or 60 years with was yanked from the planet. My brother’s death was the worst thing that had ever happened to me, the moment that would ever bisect my life into before and after.

And yet, I often felt as if my loss was invisible.

In those raw, early days of grief, I searched for books about losing a sibling. But I found only a handful of children’s books that explored the topic; nothing for someone like me, a young adult grieving the death of a brother or sister. There were more books on losing a pet than a sibling.

And then there was the immensity of my parents’ loss.

The death of a child is widely acknowledged as the worst thing. To have to plan a funeral for the person you bathed and fed and cradled shatters the natural order. My parents’ loss was unfathomable, and would last a lifetime. A parent myself now, it’s the thing I wish against every night: Just let them outlive me, I whisper into the air around their sleep-slackened faces each night—my fiercest prayer.

My grief seemed to pool in the shadow of my parents’ loss. People urged me, “Be strong for your parents.” Some even asked me to pass their condolences on to my mom and dad, ignoring the fact that I’d lost someone, too.

Grieving siblings are sometimes referred to by mental health professionals as forgotten or invisible mourners, which complicates the loss further. There was the terrible pain of my brother’s absence, of our erased, entwined future. And then there was the sense—because of peoples’ concern for my parents, and because of the lack of resources available—that maybe I didn’t have a right to feel so broken. That losing a brother wasn’t really that bad.

But it was that bad. Part of me knew it then, as every cell in my body felt pained.

Now, watching my children, I feel even more aware of what I lost.

Every day, there are hugs and spats. There are tender, cuddly moments and there are times when they bicker over absurd things, like who gets to play with the broken microphone that’s been sitting on the shelf for three years, ignored and left behind, and now, suddenly, feverishly, coveted by both.

By sharing so much time and space together, by sharing genetics and, occasionally, toys, they are deeply woven into one another. They are twinned and twined.

I read once that our bodies absorb the minerals native to the earth of our hometowns. We soak them up from the water and soil of the geographies we inhabit. Even if we move far away, our bodies remember, our cells still saturated with home.

In the same way, our brothers and sisters mark us, morph us. They alter and shape who we were, who we are, and who we will be.

My brother, gone almost two decades now—almost as long as he was here—will always be with me, just as his absence continues, the loss softer but still palpable, coursing through my cells, invisible and essential as blood. I carry him with me the same way I carry the contour of the mountain peaks of Alaska, the shining water, the rich rain forest soil. Losing my brother changed me forever, but so did loving him.

Each week, I get messages from people who’ve lost a brother or sister. They tell me they feel crushed, adrift, unseen. That they don’t know how to be there for their parents, that they don’t know how to move forward in a life they thought they’d have with their sister or brother. That it’s been weeks or years since their sibling died. They tell me, sometimes, that they feel unseen, shadowed, in their grief.

I see you, I write back. I watch my children. I run my fingers along my wounds, along the places where my brother was and still remains. I see you.