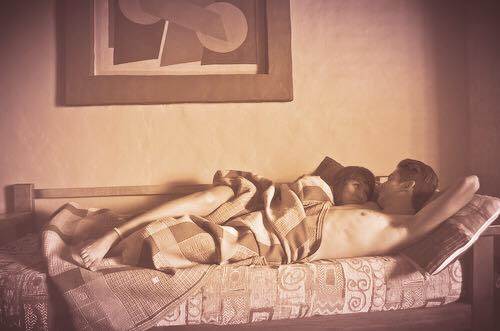 Sturdy gait, steadfast, sure. Clogs, maybe. But usually little pointy, gray flats for the office, or a nice pair of hikers for outside. She wears the same jeans she wore as a senior in high school. She slips them on without a groan. Her hair shines—clean. He likes the way it hangs out of her bike helmet in a long, swinging swath of a ponytail when they ride.

At home, she calls him out. She says, “Rinse your coffee cup.” She says, “Button your shirt; we’re going somewhere.” And he does it. He nods, because she says these things with cartoon hearts shooting from her eyes and a crafty grin on her face and she is everything. She takes his hand and pulls him.

She asks him questions. Questions like, “What did you think about today?” and, “What’s for dinner?” as she scratches the dog behind the ears. She crouches down to give him a full body workup that renders him nose lifted and forepaws pressed flat on the floor like a sphinx. “Who’s the best boy?” she asks, massaging a spell of sorts into the dog, but looking directly at her man.

And they all smile their smiles of comfort, and rub downs, and questions, and serenity. Serenity culled from the quiet domesticity of an easy Sunday passing.

Sometimes she walks all through the house as naked as can be, which is very, very naked. He does not complain. She’s not used to sharing space, but, then, neither is he. He lurks a little. He sneaks a few lustful, side-eye peeks. She does not cover herself and she is art. She is art as sure as the clock ticks and the faucet drips. She is unchained art moving inside his old, hallowed space and she stirs him in ways he will never understand. So he does not venture to try—because he knows it would ruin her.

They are outbursts. Bits of songs. Ones that stun gun him from the laundry room when he is reading cross-legged on the couch or sitting still on his mat. Ones that shake him and wake him. He jumps from his book or the paper, pausing, head tilted for more verses and top shelf notes that never come. She is a loud, squawking bird. A beautiful, rare, winged thing that miraculously returns every time she flies away.

She makes savory soup from stuff she finds outside. She knows about these things, these spores and leaves, these berries that grow wild in the open spaces near their home, these growing green and deep purple things that are not just “edible,” but with the stroke of her magic wand (which is curiously the same size and shape of an old wooden spoon), become deliciously so.

How does she know?

Occasionally she’ll throw on a faded, yellow flaxen dress to meander the dusty lanes of an open market, stopping and starting again, resolutely filling her canvas bag. She likes to purchase meadow honey and ropy beaded bracelets, and freshly sliced bars of goat’s milk soap that smell like a whipped-up ocean breeze.

From time to time, she pines for the shoreline of her youth, so she lathers herself up with it from head to toe. She likes the lady potter’s work too, and picks out a squatty mug for him, something different. He doesn’t love it. His eyebrow raises, but he will pretend because it made her happy to give it. And, who cares?

“Time to trim those eyebrows,” she says.

And they will sometimes argue, as couples do. Because he is not always right, and neither is she, and charged up feelings will dive and crash into the plays they call on the field. Whistles will blow and fouls will ensue and rules to be followed will be drafted anew. And both will learn, as they go, to be a bit more careful with their words. Because words matter more and more with each passing day.

But when they are centered and melding into a perfect storm, like DNA or funnel clouds, they are just two separate people who are also each other’s person. When they exist new like unopened books, but also old, like well-worn, threadbare socks, they simply wander, both lost and found, amid their unpicked locks of love and magic.

They are infinitely past the point of no return. He says something sophisticated, witty, knowledgeable, and she laughs, delighted, thinking, “How on earth did I ever find this man?”

She throws her head back, she gives him her neck, and the rest—well, the rest is not for you to know or think about, so don’t.

She shows him herself again and again, with her poetry, and her dew, her soup, her jaybird nakedness, and her pointed elfin feet, just how quietly confident she is on the inside. She shares with him her imperfectly perfect self, which is the grandest gift of a lifetime, one might say.

Freely, she shows him the things, the things she would like to do with him, just him, within the finite walls of any precious and generously given day.

Inside these thoughts, these thoughts that trip him across the conscious light of morning, 93 million miles away from the sun, his breath catches, and his eyes grow glassy still.

He’s quick to blame it on his allergies, but really, he knows it’s just her. It’s her as sure as the bedroom floor creaks and kitchen sink leaks.

Oh, but he is happy—happy enough to let it be.