This Classic Author’s Take on Gender Fluidity was Way Ahead of her Time. 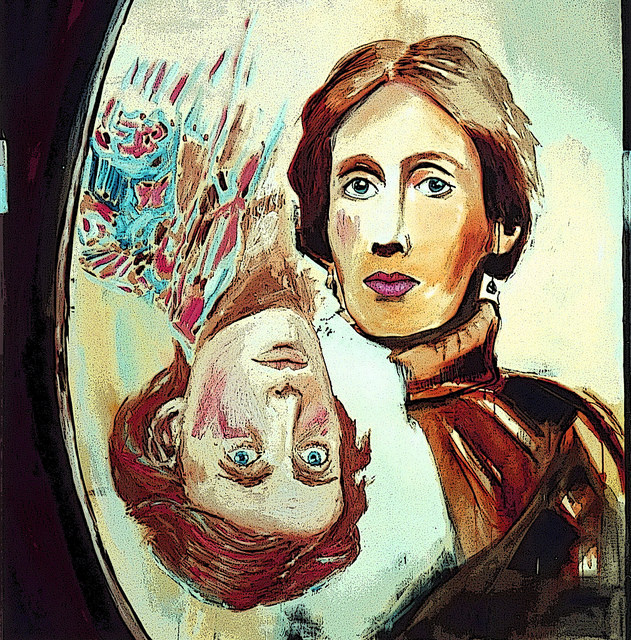 There is something about her writing that really speaks to me, and I mean that literally. Reading a book is like having a conversation with the person who wrote it, and the tone of that conversation comes to determine the experience we have reading it.

Virginia Woolf has been talking to me a lot recently, as strange as that may sound, and I think it has a great deal to do with her understanding of the masculine and feminine dynamic.

This is something I’ve neglected most of my life. I don’t know why.

Maybe it has to do with being a straight man, where the path is pretty well laid out for me romantically and sexually. Maybe it’s convenience. Maybe it’s a cultural thing. I don’t know.

Anyway, that’s not what I’m here to talk about. I’d like to give Virginia’s take on the matter—a perspective worth considering if we’d like to uncover the true connection between masculinity and femininity, and furthermore if we seek to garner a deeper sense of what it means to be human.

“For certainly when I saw the couple get into the taxi-cab the mind felt as if, after being divided, it had come together again in a natural fusion. The obvious reason would be that it is natural for sexes to co-operate. One has a profound, if irrational, instinct in favour of the theory that the union of man and woman makes the greatest satisfaction, the most complete happiness. But the sight of the two people getting into the taxi and the satisfaction it gave me made me also ask whether there are two sexes in the mind corresponding to the two sexes in the body, and whether they also require to be united in order to get complete satisfaction and happiness…”

There are two rather distinct energy fields resting within the hearts and minds of every one of us: the masculine and the feminine. Perhaps some people lean more so in one direction than the other, but the truth of the matter is that we all have both energies whirling around inside our bodies. We may psychologically identify as one over the other, but ultimately the masculine and the feminine are just divergent expressions of the same fundamental energy field, the same essential “stuff” that makes up the universe.

When the masculine and the feminine fuse and unify, a deep feeling of wholeness arises—a profound sense of fulfillment. It feels so good because this “natural fusion” represents a realignment with our essential nature, a complete integration of “self” and “other.” All duality comes to an end because there ceases to be any division or separateness amidst the movement of consciousness.

“And I went on amateurishly to sketch a plan of the soul so that in each of us two powers preside, one male, one female; and in the man’s brain, the man predominates over the woman, and in the woman’s brain, the woman predominates the man. The normal and comfortable state of being is that when the two live in harmony together, spiritually cooperating. If one is a man, still the woman part of the brain must have an effect; and a woman also must have intercourse with the man in her. Coleridge perhaps meant this when he said the great minds is androgynous. It is when this fusion takes place that the mind is fully fertilized and uses all of its faculties. Perhaps a mind that is purely masculine cannot create, any more than a mind that is purely feminine…”

This resonates with me so much, both as a man and as a writer. To me, the essence of creation is finding the quintessential balance between opposites. I can’t be one and not the other—this and not that, him and not her—if I wish to make good art. If I want to create something beautiful, I must align myself with that underlying energy that is neither masculine nor feminine and find the holy space within myself that is entirely transcendent of my thoughts and conditioning.

The fusion of masculinity and femininity is the essence of human life. It’s so deep. We bring together opposite forces, dissolving the barrier between self and other. This is why we are here. It is the divine play of the universe. We are continuously forgetting and remembering that we are God—that we are embedded in the very fabric of everything that has ever existed and everything that ever will exist.

This is powerful as f*ck, and Virginia knew it.

“Coleridge certainly did not mean, when he said that a great mind is androgynous, that it is a mind that has any special sympathy with women; a mind that takes up their cause or devotes itself to their interpretation. Perhaps the androgynous mind is less apt to make these distinctions than the single sexed mind. He meant, perhaps, that the androgynous mind is resonant and porous; that it transmits emotion without impediment; that it is naturally creative, incandescent and undivided…”

It seems as though Virginia foreshadowed the influx of online white knights and male feminists—you know, those desperate guys who are always trying to “stand up for women” when they have no sense about their actual experiences. No understanding about what it actually means to embody one’s holy femininity. It’s as funny as it is interesting.

Anyhow, I don’t know if anyone has expressed this sentiment as accurately and beautifully as Virginia—the notion of encapsulating a mind with no fixed identity, one that is entirely fluid and in no way is confined to a particular function. It is only such a mind that is capable of reaching the highest levels of human perception, whether it be in regards to creation, love, or happiness.

Let’s cultivate the balance between the masculine and the feminine within ourselves, within the workings of our own psyche and the faculties of our own spirit. Perhaps we will meet someone in the world who will aid us along this path. Perhaps not. That is secondary, for this is a journey of the soul for each and every one of us respectively, and in that we need not rely on another to fulfill us in that way.

Discover the masculine and feminine forms within, and from there our lives will come to flow with tremendous power and a deep sense of grace.

This is the path of self-actualization.