Feminists, we need to Stop Boxing each other (& Ourselves) In.

Although I could not name it then, my first feminist act was in third grade when I declined an invitation to join the popular clique.

Unable to fully understand my motivations, I sensed that it stemmed from not wanting my growth to be confined to a box—in the way I dressed, interacted with my peers, and saw the world, which was far more complex than I knew I could appreciate at the time.

It was the desire to understand, and ultimately protect, the value of our human complexities that drove me to pursue international law. From representing clients on death row in Malawi to corporate executives to asylum seekers to those tortured by Chicago police, I’ve seen time and again the harm caused by our efforts to box in one another based on our position of power, the color of our skin, our gender.

As women, many of us share the experience of being boxed in—in politics, in the office, or in our own homes—where we are required to leave defining aspects of who we are at the door. These boxes often reduce us to identities singularly defined by our bodies or emotions. Rendered one-dimensional, we appear less human and we are more readily objectified, making it easier to take away our power and do violence to us.

We witness this in how women are portrayed in film, our story arcs confined to the quest to win over a man; how video games and graphic lingerie advertisements glorify sexual violence toward women; and how women are pitted against one another in reality TV shows, “who wore it best” magazine spreads, and political campaigns where the grounds for competition are based on our tone of voice or appearance rather than our analysis and policy proposals.

This public reduction of our identities to a single characteristic makes it easier for others to restrict our power in real ways. We experience this through our country’s high rates of physical violence: one in four women have been subjected to severe violence by an intimate partner, and nearly one in five women have been raped in their lifetime, as cited by the Centers for Disease Control and Prevention. We also see this in the low rates of female leadership: Women hold 16.9 percent of Fortune 500 board seats and 18.5 percent of congressional seats, according to the Center for American Progress .

For this reason, women are essential to building an international movement that harnesses the power of diversity and grows leaders equipped to handle the complex challenges we face today. This starts with better understanding our own multidimensionality by opening and integrating the women’s movement. Not only must we open the “mainstream” women’s movement to those who have been historically excluded—women of color, trans women, migrant women, among others—but we must also recognize the valuable experience and leadership of the feminist movements led by these women.

In my work as an international attorney in a variety of contexts around the world, this means creating space for my clients’ multifaceted narratives. Rather than reducing them to one act or one personality trait, embracing my clients’ full narratives—their shortcomings and their potential—achieves outcomes that are in the best interests of society.

An act of corruption, persecution, assault, rape, or murder—whether my clients have suffered this act or committed this act—may shape their identities, but it does not singularly define them. By assuming otherwise, I would reduce them to a box, rob them of their sense of self, and limit their potential to address the very problems they have endured or created.

In today’s women’s movement, resisting the attempts to place ourselves and others into boxes that deny us important facets of our identities is key to making meaningful progress. As is going the extra mile to create space for one another’s narratives. This means reaching across the fence, the aisle, and the border to better understand one another’s many facets.

Embracing multidimensionality—within and among us—enables us to grapple with the inherent complexities and contradictions in the movement itself while uplifting one another in the process.

By leveraging our diversity, our originality, our nonconformity, we evolve as individuals, as leaders, and together as a movement. When we do so, we break free of our confinement with the tools to tackle the very complexities and contradictions contained in the imbalances of power that inhibit our potential beyond the women’s movement.

Our use of these same tools to broaden space for our collective agency gives rise to effective leadership—a leadership that applies holistic, long-lasting solutions to the multidimensional problems facing our world today.

Looking back on the clique in third grade, I see that my resistance stemmed from wanting the freedom to develop my multidimensionality and to learn how others were developing their own.

Our power arises not as insiders who create the world in our image, but as outsiders who can harness the power of our diversity to collectively envision a new world order.

Feminism is Not a Stick with which to Beat Other Women.

The Photo of Emma Watson’s breasts that caused a Feminist Twitter Storm. 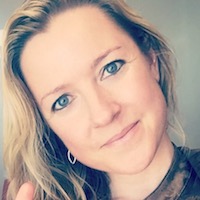