The Dark Side of the Rodeo. 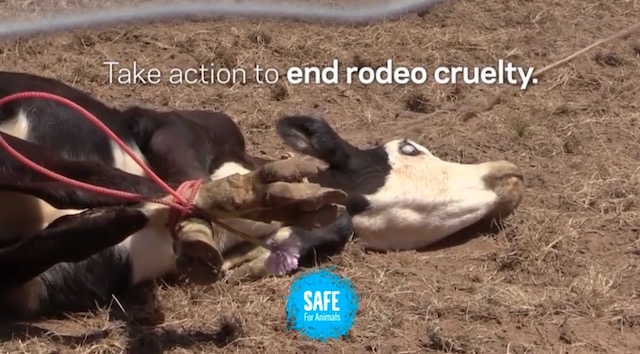 “Mankind’s true moral test, its fundamental test (which lies deeply buried from view), consists of its attitude toward those who are at its mercy: animals.” ~ Milan Kundera

Being a passionate advocate for animals inevitably led me to claims that calves and other animals endure extreme cruelty and suffering in this so-called sport, and reading Peggy Larson’s important statement on the rodeo industry confirmed my concern.

I struggle enough trying to understand how a large percentage of the meat and dairy industry get away with barbaric treatment toward animals, yet to then try to get to grips with the fact that humans put animals through excruciating pain, suffering, and, in some cases, horrendous deaths, for entertainment and pleasure is beyond me.

Rodeos in the Western world attract tens of millions of fans from the United States, with many claiming that it is culture, not cruelty. However, upon examining the horrific suffering that goes on in this industry, it is impossible to see how rodeos can be classed as anything other than a vicious and violent spectacle.

According to the PRCA (Professional Rodeo Cowboy Association) website, around 35 million people identify as fans of ProRodeo, with many traveling far and wide to attend rodeo events.

Animal welfare organizations vehemently argue that the rodeo is a cruel act of animal abuse, but those who support it say that they care for their animals, that it is cultural entertainment, and a traditional, competitive sporting event.

Animal welfare groups have protested the rodeo for decades, as far back as the 1870s. Animal welfare laws were put in place in the mid-1950s to try to control these events and nowadays, the PRCA have approximately 60 rules in place related to the care and humane treatment of livestock.

However, the non-profit organization SHARK (Showing Animals Respect and Kindness), founded in 1993 by former hunter Steve Hind, disagrees that those 60 rules effectively protect the animals.

Not only that, SHARK insists that although there are 60 points in the decree, only 20 of them are actual rules, and after a considerate amount of investigation they claim that none of them appear to be enforced.

“Anyone with a heart knows it’s wrong to clothesline a baby animal, body slam it to the ground, tie its legs so it can’t move, and drag it by the neck. If this were done to a puppy or kitten, the offender would understandably be charged with a crime, and likely be jailed. In rodeos, however, it’s called calf roping, and supporters claim it’s a sport. But the abuse of baby cows is just one of rodeo’s cruelties.”

SHARK set up a YouTube channel to document heartrending video evidence of some of the hideous abuse they witnessed at rodeo events.

The PRCA only sanctions around 600 rodeos each year in the United States and Canada, which is a small percentage of the estimated 10,000 rodeos held in these countries each year.

The regulations include having a veterinarian on site, removing unhealthy or injured animals from competition, wrapping the horns on steers, and using spurs that are not sharp.

Lindsay Rajt, associate director of campaigns and outreach at PETA, disagrees with the effectiveness of these rules stating, “All the rules that are in the rodeo really exist to protect the rider and not the animal. Their rules are like a manual on how to abuse animals.”

The American Society for the Prevention of Cruelty to Animals (ASPCA) also object to rodeos, calling them, “a cruel form of entertainment that involves the painful, stressful, and potentially harmful treatment of livestock.”

Here is a description of some of the practices:

Calf roping, also known as “tie down roping,” (which SHARK describe as the most cowardly rodeo event) is where a mounted rider chases a two to three month old calf at high speeds (approximately 25 miles per hour), then ropes it around the neck so that it is flung into the air before being slammed into the ground, and then having its legs forcibly tied together. If calves can breathe, they may cry out in pain, defecate from fear and stress, and suffer serious leg, back, or neck injuries—and possibly death.

The reason the calves run so fast is that they are often tormented in the chute before being released, where there tails are twisted or they are shocked with 5,000-volt electric prods.

In practice, calves are roped many times until they have been so badly abused that they are then designated to be used as practice for the riders.

Sadly, the calves are viewed as surplus to the meat and dairy industry, so their lives hold little value and they are destined for slaughter.

Steer busting (SHARK describes the steers as the most abused animal in the rodeo industry), involves riders roping a steer by its horns with such force that the steer flips in the air.

The roper flips the rope over the right side of the steer and turns his galloping horse to the side; therefore, the steer’s head and neck are jerked 180 degrees or more in an instant. This results in the 700-pound steer being violently tripped, rolled, and then dragged for approximately 30 feet—often with its horns digging into the ground. The steer then has its legs tied together.

The steers suffer relentlessly due to these events and are forced to continue “performing” even when their injuries have not had sufficient time to heal.

Nevada State Veterinarian, J.J. Goicoechea, has condemned this practice due to such high injury and death rates.

Steer Wrestling involves the steer running at fast speeds as it is being chased by a rider on a horse, who then leaps from his horse and wrestles the steer to the ground by its horns. The steers endure high levels of stress, and they often suffer from ripped tendons, sprains, and bruising—and possibly broken necks.

Bull riding is when the bulls are released from a holding chute, with bucking straps, and spurs are used to hurt and aggravate them into reacting aggressively so that they attempt to buck the rider off their back.

Bulls are tame animals and are not naturally aggressive animals, which is why tormenting tools are used to provoke an angered and frustrated reaction.

Mutton busting is where children as young as four ride on the back of a sheep. Hotshots (electric prods) are used while the animal is still in the chute. This causes such intense pain that it terrifies and aggravates the animal, causing it to appear aggressive.

Metal spurs and bucking straps are also used to burn the animal’s abdomen and groin area so that it bucks, often resulting in back injuries.

Dr. C. G. Haber, a veterinarian with 30 years experience as a USDA meat inspector, has witnessed the injuries first-hand and explains, “The rodeo folks send their animals to the packing houses where I have seen cattle so extensively bruised that the only areas in which the skin was attached was the head, neck, legs, and belly. I have seen animals with six to eight ribs broken from the spine, at times puncturing the lungs. I have seen as much as two and three gallons of free blood accumulated under the detached skin.”

Rodeo animals spend an extensive amount of time in transit, traveling from one event to the next.

Here are a few guidelines for those who do not support the rodeo:

Do not attend rodeo events.

If a rodeo is in your area, ask local authorities for verification that permits have been obtained.

Demonstrate alone, or with a group of others who oppose the event, and distribute leaflets at the gates of the events to raise awareness of the suffering of the animals involved.

Send emails or write letters to sponsors of the events letting them know that you disagree with them supporting the rodeo, and boycott their businesses.

Ask your local law enforcement agency or humane society to ensure rodeos follow local and state laws regarding the humane treatment of animals.

Educate family and friends by sharing articles and facts related to animal welfare and safety concerns at rodeo events.

Lobby your representatives to place bans on calf roping, as rodeo circuits require calf roping, therefore if they are outlawed it could then result in the overall demise of rodeos.

Support and raise awareness for the enforcement of laws to ensure animal care and welfare and offer protection.